Salute to a Veteran: For Him, His Time in the Navy Was a Life-Changer 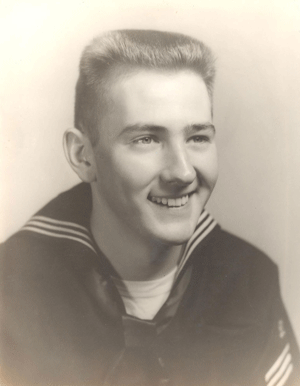 He was a lad whose father had trouble holding a job and was away from home a lot. His mother, on the other hand, “was a saint” who spent much of her time working a low-paying job so she would be home when the youngsters got there and so she could provide food for the family.

Eventually, the parents separated, and, without ever having had the father figure he needed, Heidig grew up as a “cocky kid who hated school, didn’t study, and who ran the streets with all the wrong kind of people.”

He asked his mother to sign a note with her permission for him to leave school after the ninth grade. Of course, she wouldn’t, and she begged him to stay on and do well in school. So he asked his father, and no problem. He got the note he needed, and at age 16 left school.

He got the kind of jobs a kid that age could expect, making no more than a dollar a day. When his last employer turned down his request for a 10-cent increase, he impetuously joined the Navy in order to leave. At 18 he was on his way to “boot camp” training at the U.S. Naval Training Center, Bainbridge, the Navy base at Port Deposit, Maryland. There, recruits were given a battery of tests to determine their educational and skill levels. And with his spotty school experience, Heidig did not do well.

All recruits were then trained in ordnance and gunnery, seamanship, firefighting, physical training, and military drill. Upon graduation, Heidig was shipped to Charleston, South Carolina, where he was assigned to the destroyer escort USS Tills. She made two-week training cruises to the Caribbean with naval reservists undertaking refresher and reserve training cruises, and she also used her radar to perform a host of tasks.

Heidig fondly recalls the day when he was lingering near the “off-limits” radar room, and the older radarman 1st class in charge invited him in and visited with him over a cup of coffee.

“I don’t know exactly why he did that,” Heidig says, “but he became much like the father figure I never had. He invited me to come back whenever I had time. And, over time, he taught me all about the radar … doing navigation, recommending courses to avoid a collision course with other ships, how to make emergency entrance to ports, spotting subs, etc. “Once, he also invited me for dinner with his family. I gladly accepted, because I missed my mother and brother so much, and this touch of family meant a lot to me.”

At one point, that radar training became very important, when the radarman 1st class became ill and couldn’t make the cruise. The ship’s captain then questioned Heidig at length before deciding Heidig could well fill the berth, and the captain permitted the cruise to go on. Although his Navy hitch was for only two years, it gave Heidig the structure and discipline he needed to straighten out his life. Leaving active duty in 1958 as a radarman 3rd class, he found that his high school would not accept him to make up the high school years he had missed, so he used his G.I. Bill to get his high school credits during two years at a trade school.

He then worked his way through Millersville State College, earning a B.A. in industrial arts. He then taught at a junior high school for 30 years before he retired in 1988 and went to work for a funeral home.

Since his retirement from their support staff in 1996, he has kept in shape by swimming, playing golf, and riding his bicycle. Does he think often of his Navy days?

“All the time,” he says quietly. “It absolutely laid the solid foundation for everything I did with my life.”