COVER STORY: Rebounding ‘Round the World

Warren Goodling has spent a lifetime in basketball. Among other accomplishments, he compiled a 452-205 record over 25 years as Hempfield High School’s head coach.

When he retired in 2010, he didn’t envision winning a world basketball championship in Finland as a retirement goal.

“I didn’t even think about that,” said Goodling, of York. “I thought I would be playing some basketball and doing a lot of fishing, but I didn’t really anticipate that.”

Goodling has been playing more than “some” basketball and has won tournaments before his Finnish experience.

As a member of the Lancaster Warriors and competing in the Buffalo Masters tournament 60-plus category, his team won in 2016 and defended the title in 2017. He was named an all-star in 2016 and the MVP in 2017.

Winning the 2019 FIMBA championship in Espoo, Finland, on Aug. 4, 2019, against the Russian team held extra significance, as his team represented the United States in the tournament.

“We had USA on our warm-ups and USA on our jerseys,” Goodling said. “It was really cool because we played against other countries. It was a unique feeling.”

Goodling’s games with the Warriors led him to be recruited to the 2018 FIMBA national 65-plus team, as future teammates noticed his play while he was their opponent.

“We would play in tournaments … I played against guys who were on that FIMBA USA team. Someone gave my name to the guys who run the team. Once they saw me play, they invited me to play [for FIMBA].”

Playing on a national team in a large country can limit the time members can be together to practice and mesh their games; however, as Goodling explained, having played against future teammates gives the players some familiarity with each other’s styles.

“All the guys on the USA team I played against in various tournaments over the last three or four years, so I knew everyone on my team,” he said. 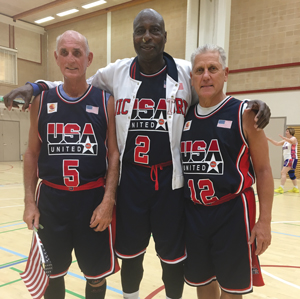 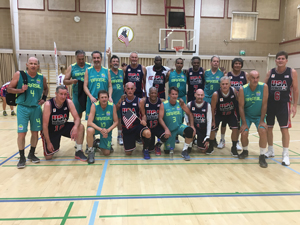 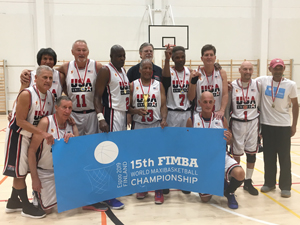 Goodling’s teammates are spread across the country, so team practices only happen when they gather for FIMBA tournaments.

With his willingness and ability to direct play from the floor, Goodling fit well as a point guard on the FIMBA team.

“My role as the point guard was that I understood everybody’s strengths, and my job was to get them to utilize their strengths,” explained Goodling. “I do make some shots, but my main focus is to play defense and to find the open man to run our offense. I am like the quarterback [in football].”

Team USA played a fast-paced offense and a defense designed to slow down the opposition. The tactic worked well as they rolled through pool play. They annihilated Chile, 110-22, and controlled the Italian team, winning 75-44.

Goodling said they seldom walked the ball up court.

“The only time we walk the ball is if it is late in the game, and we’re trying to take time off the clock. We try to beat other teams down the floor. Over in Finland, we were pretty successful in doing that. That was my job, to create the fast tempo.

“Defensively, we forced a lot of 24-second violations. We did not get one violation while we were in Finland.”

Team USA barely slowed down as they played through the championship round. They eliminated Uruguay, 90-51, and Brazil, 86-54, before reaching the opponent they anticipated playing in the final game: Russia.

The tournament live-streamed all the games, something the coach in Goodling took advantage of. He watched the Russians’ games to develop a game plan, something he knows they also did.

“Their coach came to every one of our games and sat in the first row from day one,” he observed.

The championship game was close and, in a scenario out of every young schoolyard player’s imagination, the 66-year-old Goodling walked to the foul line with less than a minute to play and the game on the line.

With Team USA up by 4, the Russians scored to pull within 2.

“I told everybody in our timeout that, if they score, I will be running along the baseline and to try to get the ball in to me,” Goodling recalled. “My teammate threw it to me, and I got fouled with about six seconds to go. If I made both shots, I could ice the game.

“I remember walking to the foul line just thinking, ‘Go up and shoot the foul shot,’” he said. “I made both of them. We’re up 4, and we called a timeout, saying that we can’t lose the game as long as we don’t foul. They missed the shot, and we ended up winning by 4.”

With winning a championship comes the opportunity to defend it, and FIMBA Team USA plans to be back in 2021.

“The World FIMBA championships are every two years,” said Goodling. “The 2021 tournament is going to be in Orlando, Florida. We are already planning to be involved in that tournament.”

To be ready, he and his teammates have entered tournaments in the U.S. and overseas. They played a tournament in Tampa in January, ending a streak of 35 straight wins. Plans to compete in FIMBA’s National Championships in Florida this May were canceled due to the coronavirus pandemic, as was the team’s trip to Spain in late June for the European Championships.

Goodling is hopeful his team can get back on the court later this year.

“We might do a West Coast tournament this fall, and we will gear up for the 2021 World Masters Championships (FIMBA) in Orlando, Florida, in the summer of 2021,” he said.

For Goodling, playing basketball is not only about winning games.

“It keeps me focused on my fitness,” he said. “The relationships with all my teams have been outstanding. We develop these friendships with people all over the country from playing basketball. It’s just expanding your network of friends, and the common thread is basketball.”