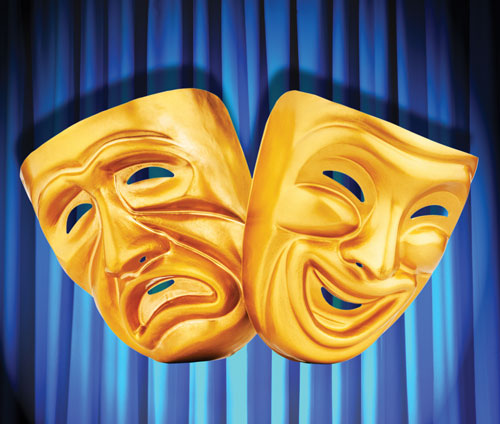 He’s 54, but Jay Miffoluf has never given up playacting. Only in his case, it’s called acting in plays.

Starting with a production of the aptly titled musical The Roar of the Greasepaint, the Smell of the Crowd during his high school years in Philadelphia, Miffoluf has never been far from a stage.

He’s appeared thus far in some 30-35 productions in local and regional theaters since arriving in Harrisburg in 1974.

He’s been Marley’s ghost in A Christmas Carol and Mr. Van Daan in The Diary of Anne Frank at Open Stage of Harrisburg. He performed in The Fantasticks at Gretna Playhouse last summer and as a guest artist in A Shayne Maidel, a post-Holocaust story.

Miffoluf has tackled the tragic Willy Loman in Death of a Salesman, as well as the comic Sir Toby Belch in Twelfth Night.

Throughout, he maintained a professional position as a computer expert. After occupying various positions, Miffoluf took early retirement last June.

“I did think of going into theater full time when I was very young,” he says. “But I needed a job. Later on, being married and always having a job, I felt it would be tough — to be constantly traveling. I wasn’t interested in living out of a suitcase.”

Even so, like all actors, Miffoluf has to put his life “on hold” for weeks or months at time for rehearsals and productions.

“I’m like a football coach during the season,” he says. “It can be pretty consuming. You wind up with a whole other (theater) ‘family’ other than your own. The laundry starts piling up, the dishes don’t get washed, and mail sits on your desk.”

Though Miffoluf always carried a cellphone and a pager during his working years, there were times he could not be reached on either because of a marathon rehearsal or an actual show. The retired government worker is grateful his supervisors and coworkers were always supportive — often coming to see him perform.

“The staff seemed to consider my activities a feather in their cap,” Miffoluf laughs.

Some roles are more demanding or influential than others. Playing the alcoholic professor in the production of Who’s Afraid of Virginia Woolf “changed” him as an actor by expanding his range.

Starring opposite Lori Myers in Shadowlands, about the life of C.S. Lewis (Narnia series), on the other hand, was “life altering.” The two have since married.

Another memorable experience was performing Studs Turkel’s The Good War — a collection of reminiscences of World War II. That was one time, Miffoluf recalls, he uncharacteristically broke out of character to applaud the audience of veterans.

“I was very teary and emotional,” he says.

Offstage, Miffoluf — a one-time golfer, bowler, and tennis player — has been working out and bicycling. It’s an essential lifestyle change since Miffoluf developed some health problems four years ago. He volunteers within the community and lavishes love on Willy, the family dog.

Theater continues to hold a special place in his heart — and schedule. Every actor adores recognition. It’s gratifying to be stopped on the street or in the mall by someone who has seen you perform and recognizes you.

“There’s a connection between you and the audience, a clicking, whether they’re laughing or they’re silent because they’re drawn into the drama,” Miffoluf says. “There’s no greater high than to come out to applause. I also get to be different people. We all want to playact.”

Some of us are especially good at it.