President Trump invited President Emmanuel Macron, France’s youngest president (elected at age 39), and approximately 150 guests to the White House for the first state dinner of the Trump Administration on April 24.

Previous administrations hosted large numbers of guests on the White House grounds, sometimes beneath a tent. The Trumps decided this state dinner would be an elegant, understated, and small affair.

The Washington National Opera was the featured entertainment, along with a menu prepared by White House Executive Chef Cristeta Pasia Comerford, a Filipino-American who has been in that position since 2005.

Wines, a popular collecting niche today, recall the historic relationship between the United States and France dating back to the American Revolution. One wine served at the state dinner was Domaine Serene Chardonnay Evenstad Reserve 2015 ($68/bottle), made from Dijon’s plants grown in Oregon’s rich soil.

The setting for the dinner was the state dining room; first lady Melania Trump organized the event and decided on its many details, ranging from the dinner menu and seating chart to the décor’s color scheme and table linens.

As guests entered the state dining room, they walked through Cross Hall. The hall was lined with oversized classical urns hosting Washington’s famous cherry blossoms, an annual sign of spring in our nation’s capital.

Visitors flock to Washington each year to see the lovely buds, and for the state dinner, the interior was filled with more than 1,200 cherry blossom branches. The scene was reminiscent of Europe’s promenades, as the White House decorations highlighted grand classicism in Western culture.

The dinner’s color scheme was cream and gold, which should come as no surprise to those who have been watching Trump working from the Oval Office over the last year or so. Like the gold décor found throughout the grand palaces of Europe and in the Oval Office’s curtains, gold is the color of choice for the Trump White House.

The table settings for the state dinner included use of the Clinton presidential china for the baseplate and pieces from both the Clinton and George W. Bush china services for the dinner service.

Melania Trump chose the Bush china, which has a green border, to highlight each table’s floral centerpieces. China from both the Clinton and Bush services offer a quiet yet elegant feel.

Other pieces on display were from the White House’s famous vermeil collection, which numbers more than 1,000 gilt objects, including flatware, pitchers, salvers, plates, chalices, and tureens.

Gilt silver objects, known as vermeil, have a 1/10,000th of an inch of gold overlay atop a base of silver. The White House vermeil collection was bequeathed by Margaret Thompson Biddle during the Eisenhower Administration with an undisclosed estimated value and includes works by artisans Paul Storr (1771-1844) and Jean Baptiste Claude Odiot (1763-1850).

Other accessory objects in use during the state dinner and on display in the state dining room were by Tiffany & Company and S. Kirk & Sons of Baltimore.

The historic event demonstrated America’s history, position, and style on the world stage. It is certainly also a fine opportunity to view some of our country’s most coveted antiques and collectibles. 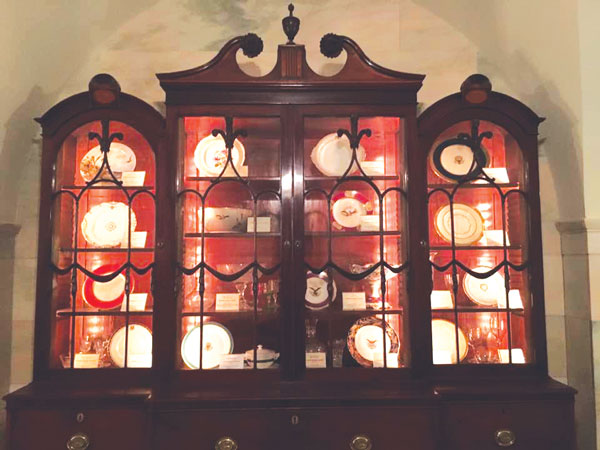