COVER STORY: A Work of Heart

Around the age of 14, pastel artist Dot Stepenaski became aware of her ability to draw.

“I would fill notebooks with drawings, she said. “When I entered high school, they introduced an art program that treated art as a major … I was hooked.”

“She is a teaching legend in our community,” she said. “She encouraged me to become a member of the Conshocken Art League and attend classes.”

That membership was vital to her growth as an artist. As Stepenaski put it, art is a “very internal process and can be isolating. Belonging to our local art associations gives us access to other artists, processes, and opportunities.”

After high school, Stepenaski took a fulltime job while also taking classes at the local art association in the evening, but “I was so unsatisfied,” she said.

Her mother was strongly against her attending college, but after a few years of saving, Stepenaski took matters into her own hands.

“I bought a car and enrolled in evening classes at the Academy of Fine Arts in Philly four nights a week,” she said.

It wasn’t easy, working full time and taking night classes. In 1976, Stepenaski met her husband, who she said has been a loving and supportive partner ever since. In 1978 she started attending the Philadelphia College of Art, but when she started a family, she set college aside.

“I never stopped painting but couldn’t get serious until the kids were out of school,” she said.

Initially, Stepenaski was a watercolor painter, but about 20 years ago she felt the need for a change.

“I found my old set of pastels from high school,” she said. “I struggled on my own for a few years, then connected with some other pastellists and took off from there.”

Pastel is composed of pigment and very little binder, Stepenaski explained, so “working in pastels is very dirty work,” she said. “You are holding the stick of pastel in your hand, working directly onto the paper.”

And although she’s been using this medium for quite a while now, “I continue to take workshops with master pastellists because you never stop learning,” she said.

“When I paint, I’m not just copying a scene … I pause and ask myself what I want to express through this painting,” Stepenaski said. “I don’t know if art requires so much courage as confidence in myself. What I do find that takes courage is to accept I can still be better. Art can be humbling.”

Before Stepenaski begins a new painting, she said she asks herself what she wants to portray.

“Art is a process of discovery and growth,” she said. “I enjoy all my paintings, although not all are a technical success.” 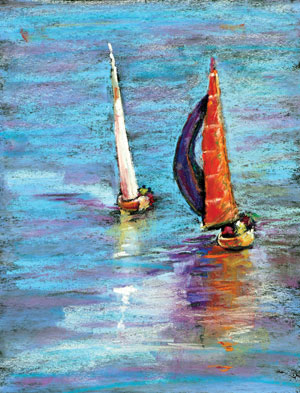 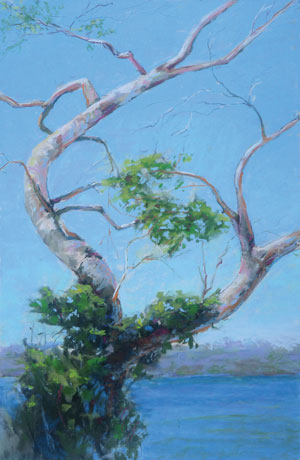 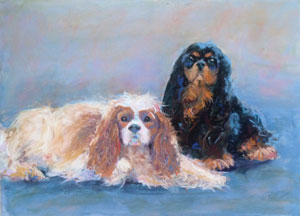 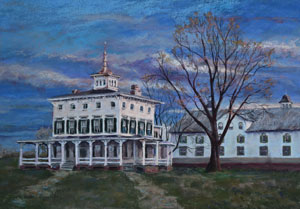 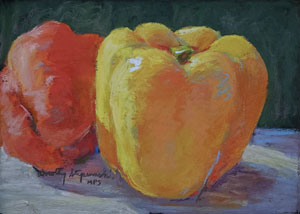 As a member of the LCAA Ladies Art Forum, where artists constructively critique and advise on the artwork of others, it was suggested to Stepenaski that she should teach because “I was pretty clear and animated in my advice,” she said.

About 10 years ago, she began teaching pastels at the LCAA, in addition to teaching at the York Art Association, Willow Valley, and Pennsylvania College of Art and Design.

Stepenaski makes it a practice to really get to know her students, which helps her understand their skill and confidence levels.

“One of the hardest parts of teaching is convincing the true novice that it takes time to become good,” she said.

Not only does she teach, but her work is frequently featured in juried art shows in the area, and she is often present for these events.

“I feel a little awkward talking about my work, though,” she said. “Art speaks for itself.”

A perfect example of that statement took place at a show at the C.X. Carlson Gallery, which featured landscapes of Lancaster County.

“I met a young woman from the area … she became very emotional and, at the end of the show’s opening, approached me to share her story,” Stepenaski said. “She was a war veteran suffering from PTSD, and she shared how my work reminded her of happier times wandering the woods as a child … you never know how much of an impact art can have on someone.”

In 2006, Stepenaski was approached by the North Museum in Lancaster to paint murals to complement their display cases featuring Susquehannock Indian history and artifacts. Unsure at first due to the large scale of the project, she decided to give it a try and agreed to do the murals, focusing on a springtime theme.

“I talked with the specialists at the museum about the importance of the river. I was a Master Gardener at the time and familiar with native plants and birds, so I suggested incorporating a ‘scavenger hunt’ in the mural,” Stepenaski said.

As a result, she included about 120 different native birds, insects, animals, and artifacts in the mural.

“Not all were easily found!” she said.

Unfortunately, the mural was destroyed during a remodel of the Susquehannock Room, but at the time, it was very well received.

The COVID-19 pandemic affected the artistic community in ways that might have been surprising to some, considering many people suddenly had more hours at home to fill.

“I found that I did less painting than normal, and heard from several other artists that they felt the same,” Stepenaski said. “Art is very much an internal dialog, and the pandemic was a huge, almost disorienting event. As time went on, though, folks were fatigued, and did look for creative outlets. That was probably the only upside of the last two years.”

Stepenaski strongly encourages anyone who has a desire to learn to paint, or to enhance their current skills by trying a new medium, to remember the “need to acknowledge to themselves that it takes time to understand how to use a new medium and permit themselves to make mistakes to get better.

“A novice student needs to recognize they will not create great paintings until they’ve invested a couple of hundred hours working.”

“There is nothing like owning a piece of original art,” Stepenaski said. “Not only are you getting a unique work of art, and supporting small business, but also you are making an emotional investment. When you hang original art in your home … it is a part of your self-expression, unique personality, and outlook on life.”

On the cover – Artist Dot Stepenaski amongst some of the sculptural art near the entrance of the Lancaster County Art Association in Strasburg.