Jackie Holzel admits she’s always been a bit of a ham and thought she would enjoy performing — but she never really did anything about it until last year, when she decided to take a leap of faith and audition to be part of the cast of the Pennsylvania Renaissance Faire.

It was an experience she’ll never forget.

During a lull in the singing, Jonathan Heise, a friend of hers, did a Shakespearean monologue.

“It was amazing because I didn’t even know he liked acting,” Holzel recalls. “We got to talking about his ability to recite a long monologue of Shakespeare … and he told me he worked at the Ren Faire.”

Fast forward to February 2021, when Holzel received a call from her friend, who said auditions for the Renaissance Faire were coming up. She decided to give it a try.

“I only had a week to prepare,” she said. “A week to get ready for something I had no experience doing was a little daunting. But I did it, and I’m proud I took the chance.”

She had to audition in front of five directors, which was intimidating, but she said she’s glad she’s a natural extrovert because that helped. She had to perform a song, so she chose “If I Only Had a Brain” from The Wizard of Oz.

“I like quirky, fun songs, and it suits me well,” she said. 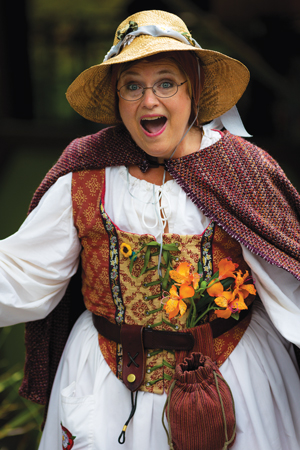 She also had to present a monologue.

“Since I only had a week to get it down, I just recited ‘The Raven,’” Holzel said. “I learned that in high school and was able to do a few stanzas without having to learn anything new.”

Holzel had no idea if she would be chosen, especially since this was her first auditioning experience, but was shocked when she got a call a few weeks later to tell her she got in.

“I definitely had doubts if I’d be able to do it,” she said. “We had to learn six songs … that was a lot for a ‘mature’ person to memorize lyrics and sing them well.”

The actors are encouraged to sing with the accent assigned to their character, and hers was Cockney, which was new to her.

“We also had to learn the real name, the character name, and occupation of all the castmates on the Shire by heart,” she said.

Daisy Plotts, gardener to the Lady Mayor, was the character that Holzel was chosen to play. Daisy was a perfect fit for Holzel because she was more of a down-to-earth character.

“I like to have fun, so I think being a lady would have stifled me,” she said. “I also have a more naturally ruddy complexion, which in those days was not a treasured thing.”

The costume took some getting used to.

“People always wore hats despite the season,” she said. “I was told that historically only prostitutes would expose their salacious hair!”

Even on the hottest days, Daisy was clad in a coif, a straw hat, and layers of clothing, including bloomers, leggings, socks, and boots, topped with a skirt and an apron, a blouse, and a vest.

“It takes a long time to lace up a bodice until you get the knack of it,” she said.

She did enjoy having a wooden rake as a part of her costume, though, because “I decorated it with flowers, and when it was raining, it was nice to have an extra support as I navigated the hills on the Shire,” Holzel said.

Being a part of the cast involves a great deal of commitment.

“Our practices were two days a week from the beginning of May till mid-August,” Holzel said. “Then once we opened, [the faire runs] every Saturday and Sunday from August through October.”

She also had to perfect her Cockney accent and purchase boots, a set of more time-period-appropriate eyeglasses, and an appropriate mug to “fill up endless times with water,” Holzel said.

The atmosphere created by the beautiful grounds helped her prepared before each performance, and although she was nervous at first, she said once the visitors came through the gates, she easily slipped into character.

“The Shire in the morning with no visitors is so quiet and beautiful … you really feel like you’ve stepped back in time,” Holzel said.

Her favorite part of the whole experience was interacting with the guests. She recalls dancing to a drum and bagpipe band, on stage, with a little girl who loves that kind of music because her dad is a drummer.

“One time I was joking with two girls, probably about 10 years old and both dressed as princesses in beautiful gowns,” Holzel said. “Later I was walking in the Shire and the two girls caught sight of me and shouted, ‘Look, it’s Daisy’ and ran into my arms. That was so special, that they were excited to see me.”

Because her experience was so positive, Holzel is now considering trying out for some local theater productions. Her work as Daisy Plotts brought much joy to Holzel, and she enjoyed sharing that joy with others.

“I loved that I could help make someone’s day by joking with them,” she said. “I love learning about others and hearing their stories.”

As far as trying something like this for the first time in her late 50s, Holzel said that although it was a little scary, “you are never too old to try that dream on for size,” she said. “What’s that worst that can happen? Instead, think of all the new friends you can make!”

Holzel is excited about the possibility of participating in the coming 2022 Pennsylvania Renaissance Faire and encourages everyone to stop by and see her, no matter who she may become this year.

She hopes to meet a lot of new friends and, as Daisy Plotts would say, “T’would be most merry!”