The traditional St. Patrick’s Day feast is corned beef and cabbage. Potatoes round out the meal and can be boiled or mashed. I make them as colcannon, mashed potatoes into which butter, milk, and cooked and chopped kale is mixed, then seasoned with salt and pepper.

So simple, so good. I used the remaining container of frozen kale from last year’s garden to make the batch shown. Make extra, because it goes well with everything. I especially like a scoop on a plate of eggs.

Corned beef comes as a point cut or a flat cut, which is slightly more expensive per pound, but a better choice. Put it in a pot, cover with water, add the packet of pickling spices that came with it, bring all to a boil, then reduce heat and cook for about three hours.

If you want to boil the potatoes and cabbage wedges in the same pot, add them before the meat is fully cooked/fork tender.

The one-pot boiled dinner likely came about because Irish peasants did not have a lot of utensils.

A good, big pot was critical to cooking the meals necessary to feed large Irish families. It is the subject of an old tune, “Who Threw the Overalls in Mrs. Murphy’s Chowder,” which can be heard sung by vaudevillian Edward M. Favor on a 1901 Edison phonograph and cylinder record from 1901.

I cannot listen to or sing this ditty without laughing. It’s easily found on YouTube if you’d like to listen and have a chuckle.

The other traditional dish that must be mentioned is Irish soda bread — also simple, and nothing beats it toasted with lots of butter. If you don’t have a wide-slot toaster, run thick slices under the broiler for a bit. Once cold, a 15-second microwave nearly duplicates that warm-from-the-oven flavor.

Once you taste it, you won’t want to wait until next St. Patrick’s Day to enjoy the caraway and raisin-rich bread that is appropriate for any meal, from breakfast to the evening snack.

Into a large bowl, whisk or sift together flour, sugar, baking powder, salt, and baking soda. Cut in butter until it is in small pieces. Stir in raisins and caraway seeds.

Mix egg into buttermilk and add. Note: Soured milk can be substituted for buttermilk. Make it by putting 1 Tbsp. of lemon juice or white vinegar for each cup of “buttermilk” needed into an empty glass measure.

Then fill with regular milk to the desired level. For this recipe, that would be 2 ½ Tbsp. of lemon or vinegar and enough milk to equal 2 ½ C total.

Blend by hand only until all is moistened. Spread in a large, buttered pan or divide between two buttered bread pans.

Bake at 350 degrees for one hour or until a knife or toothpick inserted in the center comes out clean. If it isn’t quite done and the top is well browned, lay a piece of foil over it as it finishes up. 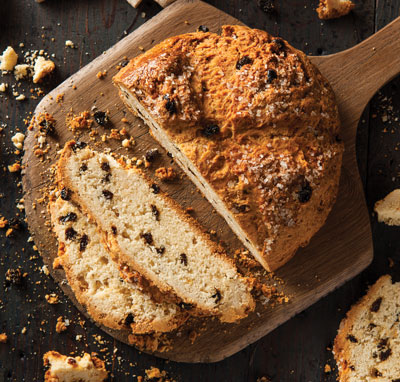