The Bookworm Sez: Keep the Memories, Lose the Stuff

The carpet in your living room is brown.

At least that’s the way you remember it. You haven’t actually seen it in a few years because you’ve got stuff from corner to corner, held down by furniture you don’t sit on, anchored by things you don’t use. Time for a major cleanup, and it can start with Keep the Memories, Lose the Stuff by Matt Paxton with Jordan Michael Smith.

Back when he was a new college grad, he was “selfish and self-indulgent” and was fired from his first job, so he moved back in with his father. Sadly, months later, his father died of cancer, and it was left up to Paxton to clear out the family home.

Shortly after that, an elderly lady from church asked for help cleaning up. And then there was another request, and another, and Paxton learned each time. Soon, he had a better way to declutter — one that works.

The first step is to “uncover the stories behind the stuff.” Have someone nearby to listen to why you kept something, to honor its role in your memories. Surprisingly, that makes it easier to relinquish items you don’t need anymore.

Are you selling, moving, tossing, or just tired of a mess? Decide why you’re decluttering and what your “finish line” will look like. Be sure to measure the space where you’ll put the things you’re keeping, and “be smart about” using storage units.

Next, tackle the clutter in 10-minute increments, and promise yourself you’ll do that every day. Know where to ask for professional help; in fact, accept help, period. Get rid of any guilt you might be feeling.

Learn how to eliminate paper, including extra pictures. Learn how to build a Legacy List. Embrace the beautiful power of donating. And know there’s a light at the end of the tunnel.

Says Paxton, “A new, simpler, and better life awaits you when you do.”

Unless you’re a dedicated minimalist — a movement that author Matt Paxton says he’s recently embraced — you probably have too many possessions and too much clutter. And too little time and too much confusion, which is where Keep the Memories, Lose the Stuff comes in.

In a gentle way that’s respectful and forgiving, Paxton (with Jordan Michael Smith) guides readers through more steps than one would expect in an effort to make decluttering and purging seem doable.

He also shows how getting rid of stuff can be soul-freeing, which could be attractive to even the most dedicated collector, and for anyone who’s reluctant to even think about emptying a home or storage unit.

If you’re downsizing, cleaning up or out, you want to spring clean right, or you’ve just become the recipient of parental belongings, this book helps you take the first tiny steps toward a clean, clutter-free existence. Keep the Memories, Lose the Stuff is a book you want in your corner. 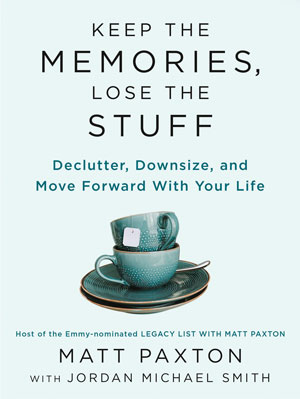