You’ve been best friends for ages — forever. Long enough to know your buddy like you know yourself, long enough to trust and be trusted.

Say you’ve got a sticky problem. You don’t know what to do, so whom do you ask? If you’re like a lot of people, you’d seek a friend and you’d listen.

For better or for worse, it’s no different when you sit in a swivel chair in the Oval Office, says Gary Ginsberg.

It’s no surprise, really, that Thomas Jefferson was pals with James Madison: They had similar outlooks on politics, and both were gentleman farmers and “proud sons of Virginia.” Theirs was a deep relationship, sometimes contentious, kept alive mostly through letters.

Growing up with a father who owned a tavern, Franklin Pierce naturally “wanted everyone to like him.”

Alas, he was not the most popular, nor the most well-regarded, president, though he bonded while in college with the writer Nathaniel Hawthorne. Hawthorne stuck up for Pierce, even when their views on slavery were night-and-day divergent.

It’s been long-rumored that Abraham Lincoln and his friend, Joshua Speed, were lovers, though most historians dispute this.

In an astounding move that could never happen today, Woodrow Wilson placed a private citizen, his BFF, Edward “Colonel” House — an inexperienced man whom Ginsberg says craved power and whom Wilson met just one year before his election — in several positions of power and decision-making during World War I. 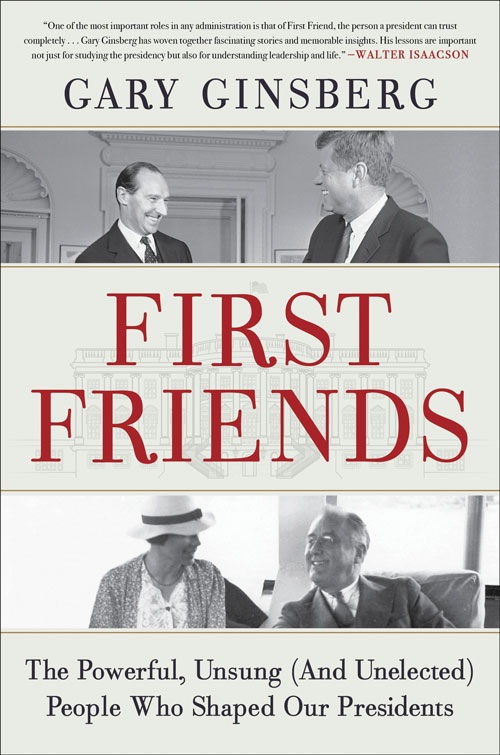 FDR’s BFF was a woman who was his social equal — and it wasn’t his wife, Eleanor.

Harry Truman was known to say anti-Semitic things, though his best friend was Jewish.

JFK’s pal, David, was distantly related to the president by marriage.

Nixon met his best friend because the guy owned a boat.

Why do we like someone? Usually, it’s a natural thing, sprung from mutual interests — or, as author Gary Ginsberg shows, it can be an engineered feat.

In that respect, First Friends can be as chilling as it is warm: Some of the “friendships” here are downright all wrong, and in certain chapters, Ginsberg gives your jaw plenty of reason to drop.

Most of the pairings inside this book consisted of “powerful man plus private citizen who had the powerful man’s ear,” and that, as you’ll see, was loaded with possibilities, both good and bad.

Surely, those friendships could’ve altered history. Can you imagine?

Then there’s that warmth: In each story here, hair-raising or not, Ginsberg makes room for a soft aura of humanness, reminders that a man might be a world leader, but he still needs a friend.

This book is a peek double-deep inside the Oval Office, and it’s the kind of history lesson you don’t often get. For historians and president-watchers, First Friends is the book you’ve needed for ages.