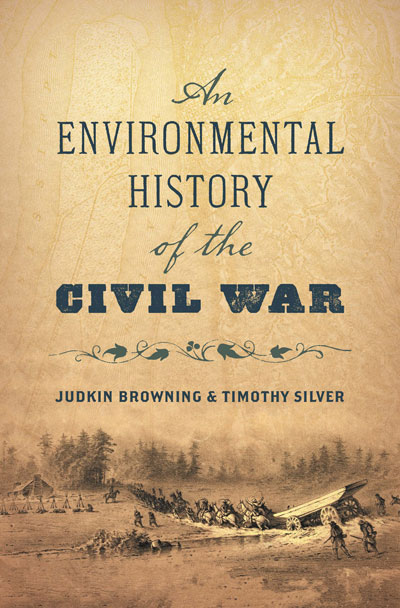 The Bookworm Sez: An Environmental History of the Civil War

You’d agree to that. Who doesn’t want to enjoy a bright, airy afternoon with cotton-ball clouds? Of course, you’d happily leave your grandchildren those shirt-sleeve kinds of days, thunderstorm evenings, clean air and water.

That’s what you’d choose if you could — though, as you’ll see in An Environmental History of the Civil War by Judkin Browning and Timothy Silver, things weren’t always so sunny.

In all the battles that occurred in the Civil War, just one campaign — the Mud March of January 1863 — was named after the weather in which it happened. It was the result of not having accurate weather information, leading to poor planning. And it was not the only time that unforeseen forces affected the war.

The war, say Browning and Silver, had barely begun when measles outbreaks hit the newly formed ranks especially hard. The average soldiers were boys from rural areas and “rural folk … lacked the immunity that some city folk enjoyed,” so thousands fell ill.

Bacterial infections followed, as did insect-carried and water-borne diseases; syphilis and gonorrhea spread, too, their effects lingering well past war’s end.

Hunger was a near-constant issue that affected soldiers’ stamina; on or off the battlefield, they were not always well fed. At least one general ordered his troops “not to confiscate private property,” but hunger was stronger than a need to obey, and food stores were regularly raided, leaving civilians to starve.

Troops dealt with floods or drought but, unaccustomed to local weather or ill prepared by suppliers, soldiers suffered from heat stroke or severe dehydration. These conditions were often exacerbated by dysentery from drinking water contaminated by debris, human and animal waste, or corpses dumped in water sources or inadequate graves.

These are but a few issues of environment that happened to soldiers, but the authors also write about the effects on the environment from soldiers: fields left stripped and barren, cattle populations that took decades to recover, entire forests destroyed, alterations to the land, and countless graves and trenches dug for those who never went home …

Chances are, if you’re a student of Civil War history, you own shelves and shelves filled with battle dates and biographies. An Environmental History of the Civil War moves the story in a totally different direction.

Here, authors Browning and Silver take a no-holds-barred approach that goes deep into parts of the war that affected men on an individual basis, with a focus that’s less on generals and more on general troops, and a narrative that extends to both Black and white.

Overall, that information is factual as well as matter-of-fact, but it can be horrifyingly gruesome, too, with vivid descriptions of wounds and dispassionate images of violent death.

This, in other words, probably isn’t a book you’d want to take to dinner.

That aside, Civil War buffs and anyone who’s curious about day-to-day details of history won’t be able to resist this thorough, non-sensational, very fascinating book.

An Environmental History of the Civil War shows that it was a war between the North and the South — and with the Earth, too.