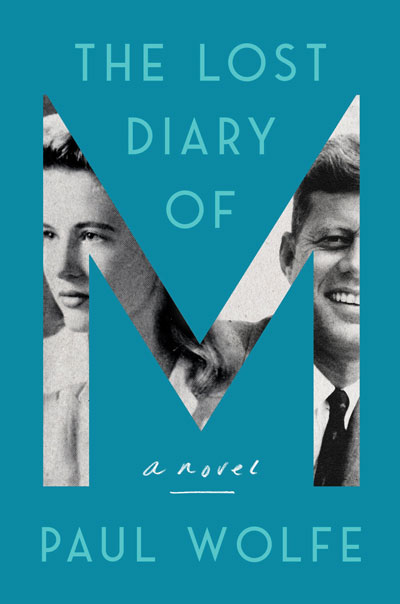 The Bookworm Sez: The Lost Diary of M

You know what you did two summers ago.

That’s because you took notes: where you were, your thoughts and hopes, observations and desires. Someday, those words could set someone on a new path in life because journals have meaning.

In The Lost Diary of M by Paul Wolfe, in fact, one woman’s diary could have worldwide impacts.

Mary Pinchot Meyer met Jack at a college dance in 1936, and she never forgot him.

But, of course, she was just Mary Pinchot then. She wasn’t yet married, wasn’t divorced, wasn’t the mother of three sons, or a painter, or a Washington socialite.

And he wasn’t the president of the United States.

She wasn’t in his bed then, either, but that changed in 1961 when they reconnected at a White House function. There he was, that big grin, trying to seduce her, his wife just across the room. Mary always wondered if Jackie knew when she joined Jackie’s husband in the Lincoln Bedroom.

She wondered if anyone knew but mostly, she didn’t care. She painted in her studio, went to lunch with her small circle of friends, and took up the Pinchot mantle by working toward a peaceful world.

When she had a chance to meet Timothy Leary and try some LSD, she did that, too, and it meshed nicely with her quiet activism. She began to think that perhaps LSD was the way to peace.

She’d need to talk to Jack about that, maybe some time when he wasn’t dealing with pain, illness, the Bay of Pigs, nuclear war, Khrushchev, public speaking events, and a hundred other things he discussed with her after their trysts.

One day, she’d make him see how important a peaceful world was, because too many people had already lost loved ones. Mary herself lost her sister and a son already in her short life.

And though she didn’t know it, she was about to lose much more …

Don’t be surprised if several different emotions go through your mind as you’re reading The Lost Diary of M.

Surely, there’s a certain voyeuristic feeling to this novel, and it starts in the first sentence, in which we’re warned that a death has occurred. That’s compelling enough, until we’re plunged into a romance that we see is somewhat one-sided, but author Paul Wolfe’s Mary can’t.

She can’t confide in anyone, either, and her emotions run from schoolgirlish to introspective as she dreams of a life with JFK beyond politics and ponders the current events that consumed Washington in 1963. Even the mundane is noted, which may or may not affect the story itself, but which belong to balance out this novel about a life.

Indeed, Mary Pinchot Meyer existed and was murdered some months after the Kennedy assassination. The Lost Diary of M is loosely based on her secret life and other historical events, and its blithely upper-crust mien, its elegance, its gossipy flair, and its shocking end perfectly match those truths.

If you might remember Camelot and its aftermath (or wish you did), take note …