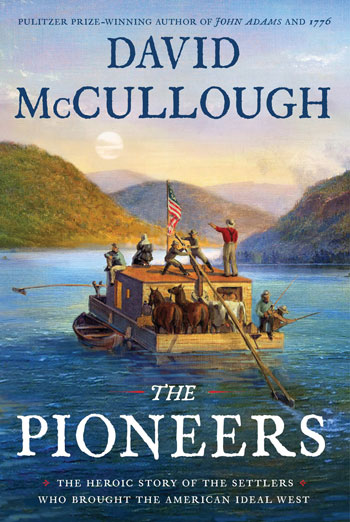 The Bookworm Sez: The Pioneers

Your vacation destination is somewhere you’ve never been before.

You want to be surprised and delighted, to see things, experience activities, and try foods that are all new to you. You’re thinking of a good pampering, perhaps, with spas and shopping.

Or maybe, as in The Pioneers by David McCullough, you’ll be roughing it, sans campers, roads, medicine, RVs, or decent boots.

As a former army chaplain, he knew that the British had ceded land to the U.S. after the Revolutionary War and that it was available, though the territory was untamed and, aside from a few forts, unsettled by white folks.

And so, following a meeting with likeminded, land-seeking New Englanders — many of them war veterans — Cutler saddled his horse and headed to New York to convince members of the U.S. Congress to pass an ordinance making settlement and statehood easier for newly populated territories.

Technically speaking, the government didn’t even own the land yet — local Indians did — but that mattered little to Gen. Rufus Putnam. Putnam had been at the meeting and, unafraid of hardship, was eager to get to this wild land.

On Dec. 31, 1787, he departed for Ohio, leading a group of New Englanders with eyes on new farms and new beginnings.

Putnam, says McCullough, likely knew the kind of “difficulties and danger” his party faced on the trip, which took more than three months to complete. They were told that the Indians in the area were “friends and brothers,” but “Rufus Putnam thought it best to wait and see.”

His caution was warranted, as it turned out. Over time, the Delaware, Wyandot, Shawnee, and Miami tribes were not happy having white settlers in the area, and they showed it with deadly attacks, stolen scalps, and by wantonly slaughtering local wildlife on which the settlers depended for sustenance.

At the end of 1790, Putnam wrote to President Washington that he feared “the worst.”

These stories — heart-pounding and soul-freezing as they are — aren’t the whole of what you’ll read inside The Pioneers. Inside, you’ll find so much more.

Readers who think “middle America” when they think of settlers are in for a treat in this book.

Author David McCullough not only takes the story back further, but he goes deeper through mini-biographies on various historical figures and by detailing the everyday lives of average settlers, both men and women.

While this is perhaps familiar information, it adds a definite relevance.

Another of the more interesting things about this book is that you may, at times, forget that it’s a historical account! McCullough tells this story with a novelist’s flair inserted into facts, which makes the excitement keener, the atmosphere richer, and the personalities of its people rounder.

Fans of McCullough’s work, therefore, will thoroughly enjoy this latest dip into a corner of history, but novel lovers may want to take a stab at it, too.

The Pioneers is well done and absorbing, but it also makes Ohio, circa 1790, a great destination.