The Bookworm Sez: Sixty: A Diary of My Sixty-First Year

Someone, call the fire department.

Right. That old birthday-candle joke was funny the first time you heard it, decades ago; now, though, not so much.

You don’t need candles or baked goods to know that you’re getting older, a fact you both love and hate, so come read Sixty: A Diary of My Sixty-First Year by Ian Brown, and commiserate.

That, or something like it, is what self-help books would have you believe, but Ian Brown indicates otherwise. Sixty is 60, no matter how you cut it—even if (and perhaps, especially) when that Certain Age sneaks up on you. 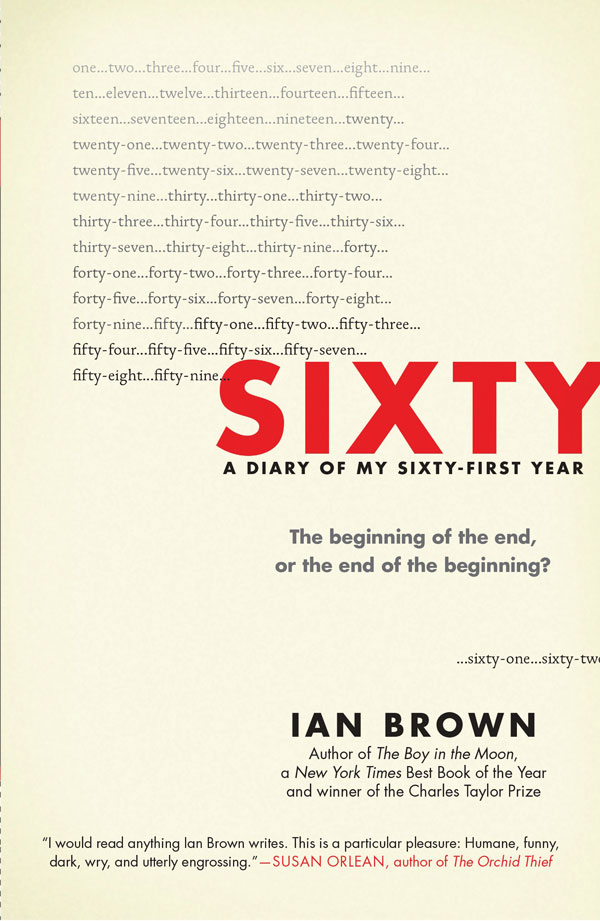 Going bald is just one indignity; running out of breath doing something routine is another. Brown also writes of thinking lustfully toward younger women, and then realizing with a start that trysting would be impossible because he’s no longer young himself. At least, he reasons, he still has the ability to desire.

Despite such downsides, though, there are bittersweet things about aging: keeping in touch with old friends, for instance, and enjoying the company of those with whom you’ve had history.

Also sweet: getting to know adult children as adults, and knowing that there’s another generation to pick up where you left off.

And yet, as birthday candles escalate in number, there’s the panicky thought that time is running out: that charity event you’d planned to pull together, the trip you wanted to take, the hobbies you always thought you’d try—they all seem out of reach.

Things you used to view as important aren’t important any longer because there’s no room for trifles. We wonder if we’ll ever have time to say what we need to say. We worry about money.

We worry about dying … but not too soon.

Though it could be argued that the pace of Sixty is indicative of a slower, more introspective time of life, I struggled with this book precisely because of its melancholy meandering.

Yes, this is a look at one man’s personal experiences in his milestone year, but it’s a diary consisting of a lot of plaintive railing and entries that aren’t always complete enough to avoid confusion.

Yes, readers get peeks at author Ian Brown’s wry sense of humor as he swings wildly between profound and profane, but he often settles back to three main topics: impending death, his failing body, and that he’s no longer sexually desirable to younger women.

These are amusing rants at first but, after the 60th reminder of how life stinks at that age—and please forgive me for saying this—it gets old.

Brown calls himself a curmudgeon at one point in this book, and if that mien appeals to you, then you’ll relish it. If you need something less pensive, though, Sixty is a book you can blow off.