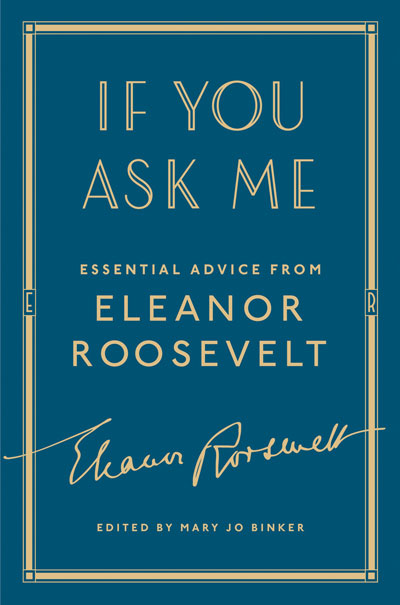 The Bookworm Sez: If You Ask Me: Essential Advice from Eleanor Roosevelt

What should you do?

When relationships break down, what then? Or you lose your job and your bank account is depleted, your home is in foreclosure, you’re a victim of discrimination — what do you do?

You ask yourself “What next?” and then you reach for help, and with the new book If You Ask Me by Eleanor Roosevelt, edited by Mary Jo Binker, the advice you get might be decades old.

Though these things may seem to be problems strictly of the modern age, from 1921 until 1962, Eleanor Roosevelt, wife of our 32nd president, also tackled these same topics in her books and magazine articles. In those 41 years, she ultimately penned more than 600 pieces.

People from every walk of life consulted Roosevelt for advice: politicians asked her and women sought her out. Men looked toward her wisdom and, says Binker, she had a particular affection for teenagers (and vice versa).

Though she wrote the words in this book generations ago, her advice is still relevant, even when contemporary viewpoints are taken into consideration.

“She genuinely cared about people and their problems,” says Binker, consulting editor for the Eleanor Roosevelt Papers Project and editor of this book.

Roosevelt’s words were comforting, but she did not suffer fools.

In 1944, she wrote that she believed women should receive equal pay for doing “men’s jobs.” She was a big proponent of organized labor, as she stated later that same year, and she was famously, vociferously pro-racial equality and against anti-Semitism.

Politically, Roosevelt used her experiences as first lady to back up her beliefs on democracy, the office of president, eliminating the Electoral College, and on dealing with political rifts within families.

She hoped that national healthcare would become a reality. She called for calm in times of trouble. She firmly favored birth control and believed that the future would turn out all right.

The surprise inside If You Ask Me is twofold: In reading the words that editor Mary Jo Binker collected, one is reminded by their shiny relevance that everything old is new again.

Seventy-five years have passed, and the same old issues have returned like sharks to chum, giving readers a dreadful, treading-water feeling. So what’s changed?

In a word, us. In the other half of the surprise is a quaint, sweetly amusing look at a time when good girls weren’t “necking,” businesswomen in “taverns” was worrisome, and the first lady believed that “rock ’n’ roll” was a “fad [that] will probably pass” and that parents “needn’t take it too seriously.”

The amusement also comes from Roosevelt’s wit and her ladylike rebukes that could be delivered on razor blades.

Yes, she “cared about people”… but she could cut, too.

This book is obviously perfect for historians, but anyone can enjoy what’s inside these mostly-still-applicable words. It’s easy to browse and fun, too, so read If You Ask Me.

That’s what you should do.