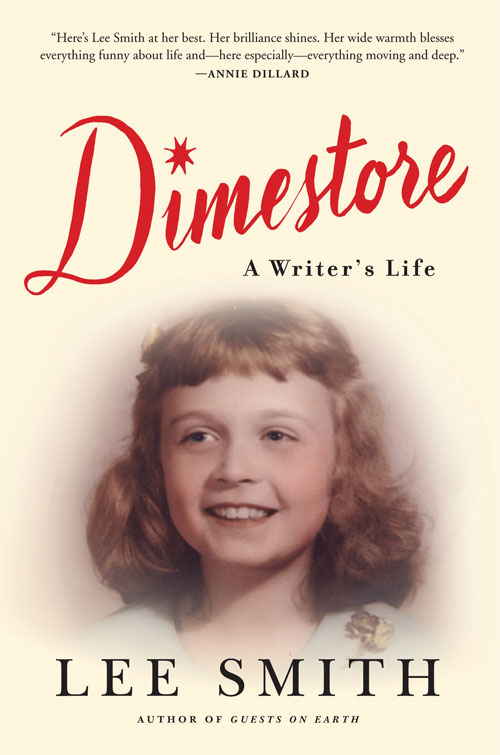 You never have to darn your socks.

That was a weekly chore for Grandma, but when you have holes in your socks, you go buy new ones.

You don’t have to settle for just three channels on TV, either, or just one local grocer, but in the new book Dimestore by Lee Smith, you can read about someone who did.

Born in an area of the Appalachians that were so steep that “the sun didn’t even hit our yard until about 11 o’clock,” Lee Smith grew up in the shadow of both mountains and dimestore.

That was her father’s Five and Ten Cent Variety Store, which he’d owned since Smith was a small girl and that he’d operated with the help of family when he was feeling “kindly nervous.”

At those times, he stayed in a state mental hospital in another city, far away from home in Grundy, Va., population of about 3,000.

Lee remembers those days but doesn’t dwell on them. When either of her parents was hospitalized for mental health issues, she stayed with family—which nearly described everybody in Grundy.

That was back when parents didn’t always know the whereabouts of their children for most of the day, and when product deliveries could take hours because “visiting” was part of the package.

It was when Saturday nights were spent at the drive-in, listening to bluegrass music before the movie began; and before chain stores replaced locally owned businesses, including Smith’s father’s dimestore.

It was when neighbors took up the slack when it was needed, because everybody watched out for everybody else.

And yet, Smith was “being raised to leave.”

There was life outside Grundy, and her parents wanted her to have it. And she did: college in another town, jobs in other states, marriage, children, and marriage again. She became a published author, a mental health advocate, a grieving mother.

And through it all, in her heart, Smith never really left Grundy.

How could she? It was home, “the perfect … education for a fiction writer.”

Inside Dimestore, there’s a little something for everybody.

Fans of author Lee Smith’s novels will find introspection here, on reading, writing, and how her novels came together. Most are humorous; some are teary.

Then there are the best parts of this book: chapters that sparkle and essays about life in a small town so isolated that many of Smith’s grade-school classmates had never even been outside the county—priceless pages, evoking nostalgia that feels like a homemade afghan or chocolate chip cookies hot from the oven.

As she does in her novels, Smith makes it seem as though we’ve met her people before, or grew up knowing them as our parents’ friends. Even readers raised in the big city will be convinced that they hailed from over yonder.

You shouldn’t hesitate to give this book to an elder, with plans to borrow it back soon. It contains the kind of warmth you need on One of Those Days. Yep, Dimestore is a pretty darn good book.