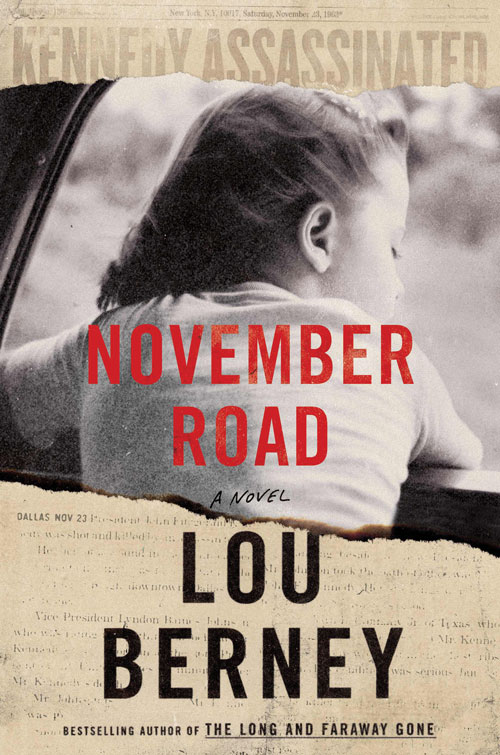 Catch me if you can!

And the chase began, one of you the pursuer, the other pursued, racing through park or playground, across the yard, down the sidewalk in a game that children have been playing forever.

Catch me if you can, and escape wins the game. In the new book November Road by Lou Berney, escape means another day to live.

On the day after President Kennedy was shot, everything became crystal-clear to Frank Guidry. For years, he’d been Carlos Marcello’s right-hand man, his fixer, his enforcer, the guy Marcello relied on, but something was up.

On the day after Kennedy was shot, Marcello’s assistant, Seraphine, told Guidry that he was being sent to Houston to get rid of a car that could connect Marcello to the assassination.

Guidry knew the rest: get rid of the car, and then they’d get rid of him.

And so he escaped.

When she was dating Dooley, Charlotte Roy knew he drank too much.

Two daughters later, too many nights waiting for Dooley to come home, and Charlotte had enough. The president was dead and so was her marriage. Grabbing her daughters and the family dog, she left Woodrow, Oklahoma, and headed for California.

When a guy like Carlos Marcello tells you to find someone, that’s what you do, and finding Guidry should have been easy for Barone, Marcello’s newest fixer.

Sure, there were wrong trails and a little matter of a badly injured hand, but he was smarter than Guidry. Finding Guidry was only a matter of time.

Frank Guidry couldn’t relax for a second. Seraphine knew he’d fled Houston and she likely knew how. He’d tried to keep his head low but he figured that Marcello would know what he was driving long before he hit the Texas-New Mexico border.

To avoid the guy who was undoubtedly tailing him, he needed to find some sort of disguise, some way to not stick out. He needed to become a family man, quick.

A future divorcee and two kids was just the ticket.

When was the last time you had a manicure?

Never mind. You won’t have any fingernails left to manicure when you read this book. You’ll have them all chewed off.

That’s because November Road is a nail-biter from the first chapter. By then, author Lou Berney has prepared a deliciously scandalous possibility for his readers, centered in a historically unforgettable backdrop, in a cultural-turning-point year, run by characters who kill as casually as they walk.

Those guys are terrifyingly ice-cold, in fact, and their presence will make you want to check the other rooms in your home — and if that’s not enough to keep you perched nervously on the edge of your recliner, put a lovely, young housewife-almost-feminist innocently in the midst of this tale, add national turmoil and a slinky female mobster with absolutely zero morals, and you’ve got a book that you’ll stay up all night to read.

You’ve got a book you’ll carry around with you.

In November Road, you’ve got the perfect escape.