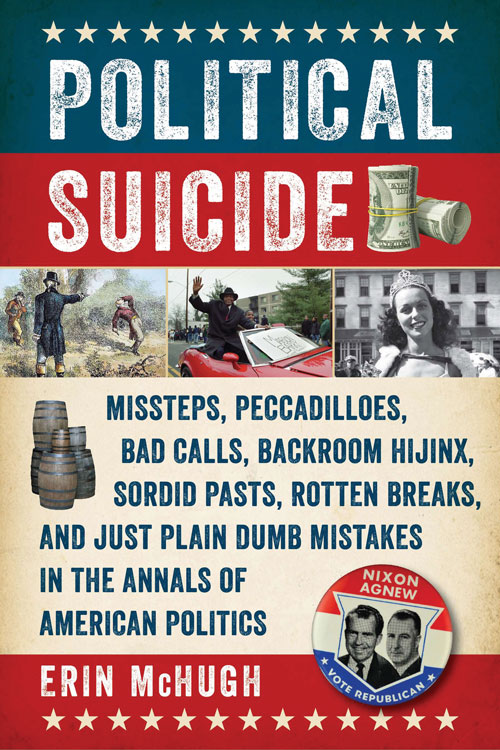 There are surely times when you’d like to think otherwise, but the truth is that they laugh, they cry, they love—and they do boneheaded things.

In the new book Political Suicide by Erin McHugh, you’ll see that all kinds of things can go wrong.

Their greed gets the better of them. Their egos need stroking, or their tempers take over.

Though the New York state assemblyman was a known philanderer himself, he was furious that his missus enjoyed a dalliance. Sickles killed his wife’s lover and went to trial but pleaded temporary insanity, becoming the first person to successfully be acquitted in that manner.

Also lucky was a California congressman who killed a man over a lack of breakfast; he likewise served no jail time.

Throughout history, there have been many scandalous quirks in politics. One sitting congressman served his country from an insane asylum. One was reelected to Congress while in jail.

And one notable congressman told a mega-whopper of a lie to gain his seat, and then tried to explain it by saying that he was “a prisoner” of his own story.

There’s money to be found in politics—although, unfortunately, it doesn’t always belong to the politician. That doesn’t necessarily stop them from taking the cash, however: One state treasurer who called himself Honest Dick “in fact, was not.” Questionable loans are altogether too common.

And imagine the shock when one small town discovered that its comptroller-treasurer “stole $53 million … money right out of the pockets of her friends and neighbors.”

There have been sex scandals aplenty in politics, words that went awry, and a lot of big mouths. Racism has reared its terrible head, as has double-crossing and blame-laying.

History repeats itself in contentious elections and Supreme Court nominations. And at least one political “man among men” wasn’t a man at all …

Looking for a little levity in the wreckage of this political year?

You’ll find some between the lines in Political Suicide, but don’t expect belly laughs or goofy stories. No, author Erin McHugh gives readers lots of true (and outrageous!) tales, but the humor comes from the situations themselves more than from the author.

McHugh is quick to point out the ridiculousness of what happened, but she also puts things into historical and cultural perspective; what’s more, her accounts seem sympathetic now and then, especially when naiveté is involved.

That gives readers a nice balance of silly, sad, and scandalous. What’s not to like about that?

Nothing, that’s what—so, White House watchers, voters, fed-up folks, and historians should want to read this book. If you need a hint of disgracefully laden lightheartedness between now and Nov. 8, Political Suicide is just the ticket.