Imagine crawling into a dark, narrow underground tunnel, not knowing if there are enemy soldiers waiting to slit your throat or shoot you without even a moment’s notice. This was the everyday experience of Douglas Graybill Jr., an American “tunnel rat” in the Vietnam War.

Graybill grew up in West Lawn, Pennsylvania, and quit school in 10th grade. After being rejected by the U.S. Army at age 16, he met a Marine recruiter, who told him, “Let’s go.”

His father signed the official paperwork on Graybill’s 17th birthday, and then he was sent to Parris Island in South Carolina for training.

“It was nothing like what the recruiter told me,” Graybill recalls.

Graybill was trained in demolition, landmines, and booby traps. He learned to carry satchel charges, mortars, and various forms of ammunition. Training was like brainwashing; they were told to kill or be killed.

Graybill was then sent to Vietnam in 1970, two months before his 18th birthday.

“My job was to crawl through tunnels and then blow them up,” says Graybill. “I wasn’t afraid to go into the tunnel. That was my job; somebody had to do it. That’s what I was trained for.”

From years of fighting the French and Americans, the Vietnamese became experts at digging tunnels. Many North Vietnamese soldiers literally lived and fought underground.

Some tunnels were small and simple, meaning Graybill would have to crawl through them on his hands and knees. But others were large and complex, with supply depots, surgical rooms, headquarters rooms, and sleeping quarters.

Graybill entered these tunnels alone and would often use candles to find his way around in the darkness, never spending more than 20 minutes in any tunnel. Graybill admits that once he was in a tunnel, he was gripped with fear, especially when he heard Vietnamese talking.

But Graybill had one major advantage: The Vietnamese usually did not know he was there. He became an expert at hiding in the dark. Sometimes enemy soldiers would crawl so close that he could literally smell their breath.

“I was shaking so bad I could feel my heart beating, but they still didn’t hear me.”

He shot several enemy soldiers with his 45-calibre pistol. To this day, he regrets killing two elderly Vietnamese women in a cooking area.

“It was an accident. I could have killed my own guys if they had been there,” he says. “I’d rather come home in handcuffs than in a coffin.”

And humans weren’t the only enemy. Graybill had to contend with booby traps and false walls. And the tunnels were rife with snakes, spiders, and biting centipedes.

Graybill used 20 pounds of C-4 plastic explosives to blow up tunnels, usually after bringing out supplies. But he generally used more explosives than he needed. He once dragged a maggot-infested dead Vietnamese soldier out of a tunnel so he could get some R&R.

Graybill says that exiting a tunnel was just as scary as entering one, since he didn’t know where he’d be coming out.

“I was worried about being shot by my own men,” he says.

Vietnam was a war without frontlines. The military brass emphasized body counts, not the taking and holding of territory. Marines were told that their enemies were subhuman.

“You weren’t killing a person; you were killing a gook,” says Graybill. “That made it a lot easier. That was our job.”

“I was in trouble all the time. I hated God, I hated everyone, I hated myself,” he says.

His troubles included arrests for assault and battery, flunking out of Ohio State University, finding and losing job after job, periods of homelessness, and two divorces. He would even beg policemen to shoot him.

“For almost 10 years I couldn’t even walk on a sidewalk. There was always a sniper aiming at me when I was walking down a street in daylight,” he says.

“Then I realized it was all in my head,” he says.

Graybill eventually reenlisted in the Marines. He was stationed in Beirut, Lebanon, three times and participated in the 1983 invasion of Grenada. He later served in both the Army and Marine reserves, but continually got into trouble.

In 2006 he married an Army veteran named Elizabeth, whom he credits with saving his life. She encouraged him to start attending veterans’ meetings and doing simple tasks, such as eating in restaurants.

Graybill is still haunted by his inner demons, but he has found his calling by helping fellow veterans in need. He has opened a privately funded center in Reading that provides food, shelter, and clothing for veterans with and without homes.

“It’s a place where veterans can come and socialize,” he explains. “Their financial status doesn’t matter: Loneliness is loneliness.”

To learn more about Graybill’s veteran social center, visit the Veterans Making a Difference Facebook page or go to www2.readingeagle.com/article.aspx?id=328668. 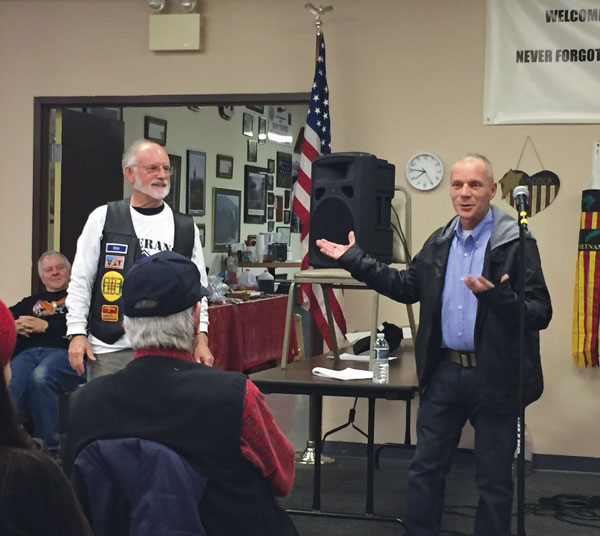