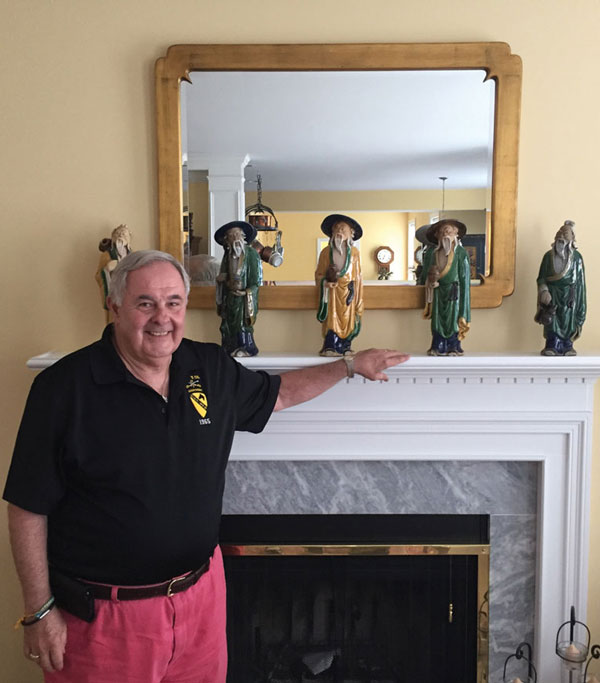 Jay Snyder’s war ended 51 years ago. But after retiring from a distinguished career working for the Pennsylvania state government and as the leading tennis official in the United States, the war now seems as close as it’s been since he left Vietnam in 1966.

Snyder was a minister’s son, so he frequently moved as he was growing up. His father was working in Selinsgrove, Pennsylvania, when Snyder finished high school, so he attended nearby Susquehanna University and graduated in 1964.

Realizing he had a very low draft number, Snyder decided to enlist in the Army. When the Army recruiter pointed out that he’d have a better life as an officer than as an enlisted man, Snyder signed up for Officer Candidate School and headed for Fort Benning, Georgia.

“They warned us that OCS would be the toughest challenge we had in our life,” recalls Snyder.

He spent the next six months doing pushups, doing chin ups, and being yelled at constantly.

“The Army’s theory is that they have to break you down to build you back up,” says Snyder. “It was a pretty tough six months, and about 60 percent of the class washed out.”

After graduating from OCS as a 2nd lieutenant, Snyder wanted to become an Army Ranger, so he was sent to jump school. But he was later transferred to an airborne cavalry unit.

He continued his parachute training, which paid an extra $110 per month — a lot of money in the mid-’60s.

“If I was going into combat, I wanted to go with the guys who were volunteers, who were well trained, who were there because they wanted to be part of that unit. And that’s what I got in an airborne unit,” says Snyder, who adds that his training prepared him to be a soldier, but “I don’t think anything can prepare you for the reality of combat.”

In July 1965, President Lyndon Johnson ordered Snyder’s cavalry division to Vietnam. On Aug. 15 they departed aboard a transport ship, the USNS Geiger, from Savannah, Georgia.

After passing through the Panama Canal and stopping in Hawaii and Guam, they landed in mid-September in Qui Nhon, in central Vietnam.

Snyder and his men expected to land in a hostile environment, with enemy soldiers shooting at them as they got off the boat. Instead, they were greeted by TV cameras and signs saying “Welcome to Jones Beach East.”

“So much for landing under fire,” jokes Snyder.

But his unit soon got down to business. They were flown by Chinook helicopters to a base camp in the Central Highlands. For nearly a month the duty was mostly uneventful, with occasional mortar rounds being lobbed into the base. Snyder’s unit went on patrols to chase away the attackers.

Snyder’s first battle took place in the Suoi Ca Valley. Snyder and his company of about 110 men spent a couple days on search-and-destroy missions, going into villages to look for signs of enemy activity.

The men destroyed a number of rice caches used by the Vietcong, but Snyder insists, “We did not burn rice that belonged to villagers.”

The men received sporadic gunfire but suffered no casualties. They spent the night in rice paddies, where they encountered one of their most annoying enemies — leeches — which came out of the ground in heavy rain.

“We found out pretty quickly that they’re not nice beasts,” says Snyder.

Like all soldiers, Snyder relished each mail delivery. Besides receiving letters from family and friends, he started corresponding with a woman named Jeanne, who was his sister’s college roommate. What started out as “a fake romance” would later blossom into a 50-year marriage.

Snyder’s unit was later flown by chopper into the Pleiku Campaign, which lasted from late October to late November 1965. Despite heavy fighting all around them, Snyder and his men at first saw very little combat.

“For whatever reason, the North Vietnamese chose not to engage us,” he says. “We were all walking on eggshells, thinking they’re going to hit us any second now, and they didn’t.”

Up to that point in the war, Snyder and his men were lucky to avoid casualties. But they didn’t stay lucky. In January 1966, Snyder was leading a patrol near the village of Bong Son. A captain radioed Snyder to move faster so his platoon of about 25 men could rendezvous with other units.

“We were in a combination of jungle and open area, and it just didn’t feel right to keep moving faster. I took point and I walked my platoon right into an ambush,” recalls Snyder.

Vietcong guerillas peppered the men with rifle fire, killing one man. Another died when his grenade exploded in his hand. Several other Americans were wounded.

Snyder radioed for artillery support, which drove off the attackers after about nine minutes of intense combat.

“The shrapnel would go off over our heads,” recalls Snyder. “It sounded like a freight train driving over your head.”

After some R&R in Bangkok, Thailand, Snyder flew into another battle in a helicopter and nearly died when the helicopter was hit with a 50-caliber round and landed hard.

Five weeks later, Snyder and his unit were moving up a mountain when they were nearly surrounded by Vietcong. Outnumbered in heavy jungle, the men resorted to a tactic known as a “mad minute” — with everyone opening fire for about a minute.

“The mad minute saved us,” says Snyder. Several of his men died in the battle.

Snyder received shrapnel wounds in his left shoulder and buttocks from mortar fire but remained in the fight until the enemy fled.

Snyder had to wait a full day before he could be medevacked by chopper. He spent three weeks in the 85th Evacuation Hospital at Qui Nhon. An infection developed, so he was flown to Clark Air Force Base in the Philippines and then to the U.S.

Fortunately, he made a full recovery at Valley Forge Hospital outside Philadelphia, but a fragment lodged in his left shoulder still causes pain whenever the weather changes rapidly.

He met Jeanne there in person soon after his return, and they got married in August 1967, about two months after he left the Army.

Snyder took management training and went on to a distinguished career working for several state agencies. He spent much of his spare time working as a tennis umpire, and in 1990, he was promoted to U.S. director of officiating.

He umpired matches involving all the top men’s and women’s players, including the 1993 Wimbledon semifinal between Andre Agassi and John McEnroe.

Like many umpires, he incurred the wrath of volatile players such as McEnroe and Jimmy Connors. But he later became good friends with McEnroe, whom Snyder credits for being an honest competitor.

He and Jeanne adopted a Vietnamese son and have three grandchildren. They visited Vietnam twice, and Snyder was deeply impressed by how the people have welcomed their former adversary, and how a united Vietnam has recovered from the devastation of war.

During these years of constant activity, Snyder was able to put his war experiences in the rearview mirror. He even boxed up all his medals and put them in a barn.

“I got over my experiences in Vietnam by working my butt off,” he says.

But once he retired, painful memories rose to the surface.

“Vietnam has always been with me,” says Snyder. “It took a while for me to realize that PTSD was something I needed to face up to.”

To this day Snyder regrets the men he lost when he led his company into an ambush, but he’s not sure what he could have done differently.

“You’re responsible for those lives, and you can’t ignore that. I can’t explain how difficult that is, how your decisions cost somebody their life. I just kept that way in the background.”

Snyder has received professional help, including group therapy. And he has started writing about his war experiences as part of a veteran’s writing project, which has been a cathartic experience.

Snyder, now 75, occasionally shares his Vietnam experiences in public talks, including one in June 2017 in Centre County. You can hear his story by visiting https://goo.gl/Fy1M4g.