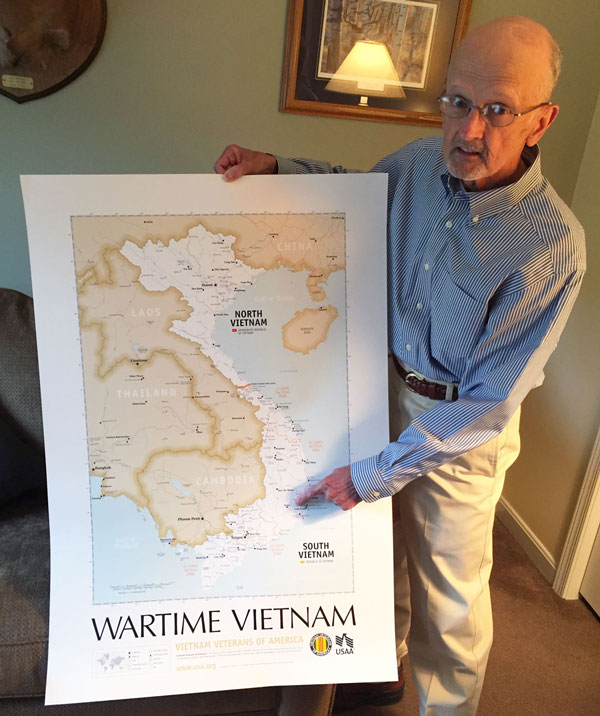 Imagine you’re in the Vietnam War, flying over the central highlands of South Vietnam. Your pilot drops you off on a remote airstrip.

Moments after he takes off, you realize you’re 15 miles from where you were supposed to be, and your only companions are husband-and-wife American missionaries.

Fortunately, Greg Gaffney, of Hummelstown, is still around to tell his story.

Gaffney, 71, was born and raised in Harrisburg, in what he describes as a “much simpler time.” After graduating from John Harris High School in 1963, Gaffney followed in his father’s footsteps and went into the construction business.

But after receiving a low draft number, he joined the U.S. Air Force in September 1965, thinking it would offer better opportunities for training and travel than the other services.

After receiving his basic training in communications at Lackland Air Force Base in Texas, Gaffney was transferred to Niagara Falls International Airport in upstate New York, where a fighter squadron was stationed.

Gaffney spent 14 months in the communications center, doing everything from working at a switchboard to sending and receiving messages over a teletype machine.

In December 1967, he and about a half-dozen buddies received orders to go to Vietnam. After a series of long flights across the Pacific on a giant C-141 transport jet, he landed just outside Saigon at Tan Son Nhut Air Base.

“When they opened the door of the airplane, you could feel the heat smack you in the face,” says Gaffney, who describes this as one of his most vivid memories.

“I had never been in the tropics. We could hear explosions and see flashes in the distance. My friend turned to me and said, ‘I guess we’re here.’ I replied, ‘I think you’re right.’”

A few days later, after being issued jungle gear and weapons, he took a short flight to an airstrip near the city of Da Lat.

He and his companions were driven in an old Dodge wagon (with a missing door) to a small house in a valley where Air Force personnel lived. The house was outside a security compound, and quite vulnerable.

“We didn’t ask why,” says Gaffney.

The local Vietnamese were outwardly friendly, but Gaffney notes, “They could be washing your clothes in the daytime and setting a booby trap at night.”

Gaffney worked inside Operating Location 25 (OL-25), a well-defended base about 6 miles away on top of a hill. OL-25 was never assaulted on the ground during Gaffney’s time there, but the Viet Cong sporadically fired rockets in its general direction, without inflicting casualties.

He worked 12-hour shifts in the communications center. His primary mission was to receive coordinates for airstrikes, including small jets flying from nearby bases and B-52 bombers originating in Thailand and Guam. Gaffney would pass that information on to radar operators, who directed the attacks. 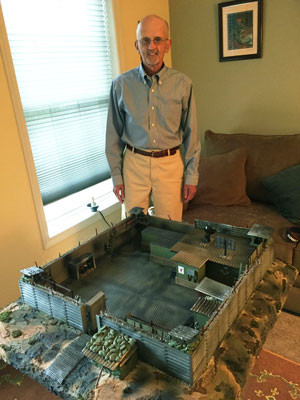 Conditions at OL-25 were primitive, with no medical facilities. The men ate the same bland military rations day after day, so Gaffney and his buddies often bought food from local Vietnamese. This included bread with bugs baked in.

“At least we got a little protein with our bread,” jokes Gaffney.

They sometimes drank locally brewed beer, which was later found to be unfit for human consumption. But it was safer than the water. Unsurprisingly, many of the men came down with dysentery and hepatitis, including Gaffney.

His weight dropped below 100 pounds. Eventually, he became so sick that he had to be medevacked by helicopter to a field hospital at Nha Trang. “Being in a field hospital gave me deep appreciation for the men and women who worked there,” says Gaffney.

Severely wounded GIs would be flown in, but the doctors and nurses always maintained their composure under severe stress, and almost always kept the injured men alive.

After recuperating for 10 days, Gaffney took the earliest available flight, aboard a six-seat Air America propeller-driven airplane flown by a U.S. mercenary.

The pilot flew over mountainous terrain in cloudy weather, by visual navigation alone. He dropped off Gaffney and two American missionaries on the wrong airstrip and took off before anyone realized the error.

Fortunately, the missionaries spoke fluent Vietnamese and somehow arranged for a white van to take them back to Da Lat.

“If not for the missionaries, I would be speaking Vietnamese today,” says Gaffney.

Gaffney returned to the U.S. in December 1968, just before the Tet Offensive. Gaffney learned several years ago that OL-25 was evacuated and captured by enemy forces shortly after he left the base.

The war was “a non-subject” when Gaffney got home.

“People would say, ‘Hey, it’s good to see you,’ and that was it. It was a volatile time in the country’s history,” recalls Gaffney.

After serving for 10 months at Charleston Air Force Base in Maine, Gaffney volunteered to return to Southeast Asia. He spent a year at Nakhon Phanom Air Base in northeast Thailand, just across the border from Laos.

After a total of four years in the Air Force, Gaffney was honorably discharged. He returned home to his family in August 1969. Like many returning Vietnam veterans, Gaffney did not exactly receive a warm welcome on the mainland. He was spit upon while walking down a ramp in the San Francisco Airport.

Gaffney holds no grudges for the poor reception he and other veterans received.

“Bitterness doesn’t pay; it just weighs on you as an individual,” he advises.

Just three days after returning to his family in Harrisburg, he was back on the job for his uncle’s construction company. He still works two mornings a week in construction, and says he has enjoyed every minute.

Although his work doesn’t use many of the communications skills he acquired in the Air Force, he says his military experience helped him learn the importance of teamwork.

“When I came home, I wasn’t afraid of anything,” he adds.

A few years ago, Gaffney created an impressively detailed model of OL-25. He mostly used off-the-shelf parts, such as a measuring spoon for a radar dish. He keeps the model in a closet but displays it whenever he receives visitors who are interested in his Vietnam experiences.

Gaffney occasionally gives talks to students about his time in Southeast Asia.

“Any time I have a chance to speak in a high school, I’ll tell my story,” he says. “But the main reason is to bring honor to those 58,315 names on the wall.”