Service Stories: Double-War Vet Wondered, ‘What is an Atomic Bomb?’

Camp Hill resident Glenn Bushey is a two-major-war veteran of the U.S. Army. A member of the Greatest Generation, he earned many awards during his military career, including a Bronze Star and Combat Infantry Badge with Star.

Bushey was sent to Fort Benning, Georgia, for basic training. In March 1944 he was sent to the 86th Division at Camp Livingston, Virginia, where soldiers were trained for combat.

But because of the need for more troops in the Battle of the Bulge in Europe, the Department of Defense in Washington, D.C., decided to send the 86th Division to Europe.

After intense training in California through January 1945, Bushey and his division arrived in France in March 1945.

On April 27, 1945, as a member of the 7th Army, Bushey was severely wounded when a German machine gun nest suddenly shot him in the lip, left arm, and right hamstring in the Danube River area. He was just a 19-year-old private 1st class.

Bushey would not have survived this attack had his wounds been closer to major bodily organs and arteries. Medics treated him in a field hospital and then airlifted him to a hospital in Paris for further treatment.

He was later sent to a hospital in Cambridge, England, in May 1945.

On May 8, 1945, V.E. Day (Victory in Europe), the Germans officially surrendered, and Bushey’s division shipped to New York City to participate in a big ticker-tape parade. Shortly after that, his unit was deployed to the Philippines; the war with Japan continued.

Being not fully recovered from his wounds yet meant no parade and no redeployment for Bushey.

“I really wanted to go,” he said, “but they wouldn’t let me. I was very disappointed … They were my buddies. You want to be with your buddies, right?”

Bushey left Europe to return stateside in July 1945 and arrived in New York in August. It was at this time that the U.S. Army/Air Force dropped two atomic bombs on Hiroshima and Nagasaki, Japan, on Aug. 6 and 9, 1945.

“We had no idea what an atomic bomb even was when we heard this had happened!” Bushey recalled. “We never heard of any such thing as an atomic bomb!”

This wartime project had been a top U.S. military secret.

Following the bombing of Japan, Bushey was transferred to train and work at Fort Indiantown Gap to work in the Army Separations Center preparing active-duty soldiers for discharge and, for a short time, as a military police (MP) member.

Bushey was honorably discharged from the U.S. Army in March 1946.

That summer, Bushey enrolled in Gettysburg College, where he majored in mathematics and graduated in 1949. He enrolled in the U.S Army Reserve Officers Training Corps (ROTC), where he was paid $20 per month as a cadet.

Upon graduation from Gettysburg, Bushey was commissioned as a 2nd lieutenant. He later acquired a master’s degree in education at Penn State University in January 1955.

In spring 1951, Bushey received notice to report to the Armed Forces Entrance and Examination Station in Philadelphia, and in June he was sent to the Fort Meade, Maryland, Induction Center to begin training for the armed conflict in Korea.

Bushey became a platoon leader as a 2nd lieutenant in the U.S Army 43rd Infantry Division. In October 1951, the Army sent him to Fort Benning, Georgia, for basic officers training school, where he was promoted to 1st lieutenant before deploying to Korea in April 1952.

In Korea, the unit’s mission was to go on night patrols to identify locations of Chinese enemy troops.

“The only combat I saw was in the form of back-and-forth artillery fire. Nevertheless, there were casualties,” Bushey said.

As a reserve officer, he was then rotated out from Korea early five months later.

“I had enough,” he said, and so he quit the reserves.

In October 1952, about eight months before the end of the Korean War, Bushey returned to the U.S., where he was honorably discharged from the U.S. Army.

He has been awarded a Bronze Star, a Purple Heart, and a Combat Infantry Badge with Star for his combat roles in both World War II and Korea.

For the next 29 years, he taught mathematics and algebra for the seventh through 12th grades at Lemoyne Middle and High schools, from which Bushey himself had graduated in 1943.

He also served as a school administrator for 11 years before officially retiring in 1982.

In his retired life, Bushey likes to walk a mile every morning, goes to physical therapy three times per week, drives his own car, is active in his local church, and cuts his own lawn at home on a riding mower.

Bushey’s wife passed away in 2012; he has a 91-year-old brother who lives in Audubon, Pennsylvania.

Over 200 veterans attended and were recognized. Some were World War II veterans, one of whom turned 100 on the day of the event.

He recently said he “feels and believes that every young person, male or female, should serve sometime in the U.S. military. Veterans are better students than if they were not veterans.”

Bushey attributes his “lucky longevity in life” to his “strong faith in God.”

Bushey with his dog, Amy. 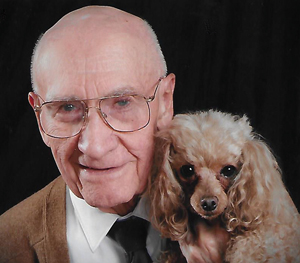