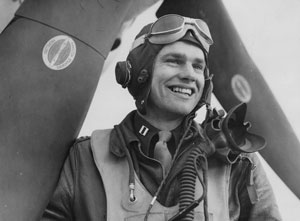 To qualify as an ace, a fighter pilot must be credited with shooting down five or more enemy aircraft during aerial combat. Anderson achieved the feat three times, destroying a total of 16 and 1/4 planes in the air and another one on the ground, earning the distinction of triple ace.

During the war, Anderson served two combat tours, escorting heavy bombers over Europe. He was chosen as one of the original flight leaders of the 357th Fighter Group, equipped with the new P-51 Mustang.

Anderson flew 116 combat missions and in the process became the highest-scoring ace in the 363rd Fighter Squadron. His plane, Old Crow, was never hit by enemy aircraft or forced to turn back for any reason.

Anderson was decorated 25 times, was inducted into the National Aviation Hall of Fame, and has been awarded the Congressional Gold Medal.

Following World War II, Anderson served in the Air Force as a fighter test pilot, flying many models of early jetfighters. Anderson has written a book about his exploits, To Fly and Fight, co-authored by Joseph P. Hamelin.

Anderson turned 99 on Jan. 13 and is the highest-scoring living U.S. fighter ace and the only surviving U.S. triple ace.

The June 3 Zoom meeting is open to the public, and no registration is required. To attend, look for the information and Zoom password located on the organization’s website: centralpaww2roundtable.org.