The Hon. James F. Geurts, performing the duties of undersecretary of the Navy, received the French National Order of Merit, with the rank of Knight, during a decoration ceremony at the French Embassy in Washington, D.C., on May 11. Geurts is a native of Lancaster.

The secretary was nominated for the award by French presidential decree, based on efforts throughout his civilian career, including his time at U.S. Special Operations Command and as the assistant secretary of the Navy for research, development, and acquisition.

The French National Order of Merit was created in 1963 by then-resident Charles de Gaulle and acknowledges distinguished military or civil achievements for acts of devotion, bravery, generosity, real merit, or a measurable commitment to serving others or France.

Geurts has over 30 years of extensive joint acquisition experience serving in all levels of acquisition leadership positions, both as an officer in the U.S. Air Force and as a career civilian in the Department of the Navy. 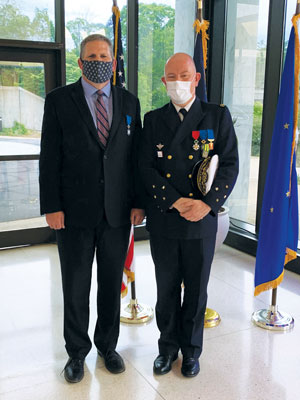