The following is the continuation of Russell “Doc” Walters’s Vietnam experience. Part one appeared in the February issue of 50plus LIFE.

One day, Walters’s commanding officer said, “Doc, if you want to be a real part of this unit, you might wanna go on some missions with us.”

So he did, flying on a Huey helicopter for what would be the first of numerous combat assault missions. A photo shows Walters in the helicopter sporting a wry smile. But in hindsight, he says, “I don’t know why I looked so cheerful except for the fact I was young and dumb.”

And yet on that mission, Walters’s tracker unit did not make contact with the enemy, who had already fled the area around the landing zone after losing several men in a firefight.

On a combat-tracker mission out of a forward base at Song Be, Walters’s small unit went out to find a missing G.I. who had gotten lost in the jungle. The missing soldier later wandered back into camp unscathed.

But when Walters’s team and their supporting infantry squad were heading home, Walters witnessed one of the soldiers tripping an enemy booby trap, leading to one fatality and wounding several others.

On another mission out of Song Be, he saw his first enemy dead soldier after a firefight. “The funny thing is, I sort of felt sorry for him,” Walters recalls.

And later, while riding a tank on a mission with the 11th Armored Cavalry Regiment, an RPG round knocked several men off the vehicle, including Walters. Fortunately, there were no injuries.

All of these close calls left Walters with a case of post-traumatic stress disorder.

As he says now, “I don’t know a single man from a combat tracker or a scout dog unit that didn’t have some degree of PTSD after getting home from Vietnam. It was just the nature of the job.”

After serving his one-year tour, Walters voluntarily extended his time in Vietnam for another six months.

He was transferred to the 23rd Infantry Division in Chu Lai, one of the largest Army bases in Vietnam. Distinguished alumni of this division include former Pittsburgh Steeler running back Rocky Bleier, Pennsylvania Gov. Tom Ridge, former Secretary of State Colin Powell, and Gen. Norman Schwarzkopf.

There, he volunteered to serve as a helicopter door gunner in the midst of a large operation into the neighboring country of Laos.

But his request for transfer was denied by an officer who wrongly assumed he was an infantryman looking for easy duty, when in fact Walters was a noncombatant veterinarian specialist.

“Yeah, I was trying to get a cushy job for myself, flying on a Huey as a door gunner over the friendly skies of Laos,” says Walters, with an air of sarcasm.

Operation Lam Son 719, which lasted 45 days, resulted in 100 American helicopters destroyed and another 500 damaged, with 50 crew members killed in action.

Tropical diseases were always a problem in Vietnam. In April 1971, Walters had to be medevaced to an Army hospital for malaria. Feeling sick as a dog one night, he asked one of the nurses if she could put a bullet in his head so he would feel better.

And then came the scout dog mission of April 23, 1971, when, as Walters says, “the worst day of my life occurred in a single nanosecond.”

A Viet Cong explosive device detonated, perhaps by command, killing nine Americans and wounding 11 others. A scout dog also lost her life. To this day, Walters cannot remember how he got back to his base.

“Two hours of my life were a total blank and still remain so to this day,” he says. 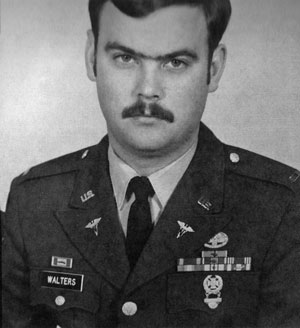 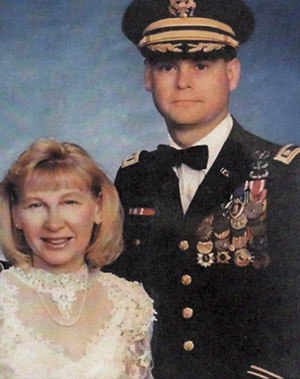 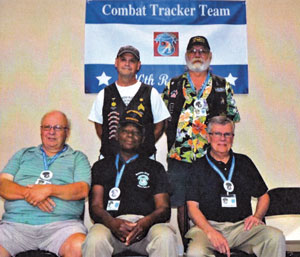 The VA called it “medical amnesia.”

After a short trip to Antarctica, possibly to help test new cold-weather gear, followed by leave in Lewistown to see his family and a short stay in Hawaii, Walters returned to Chu Lai in late July for his second six-month extension. Soon thereafter he experienced his only nighttime firefight.

“At the time, I thought the sight of thousands of rounds of red, green, and white tracers whizzing around in the dead of night was one of the prettiest sights I had ever seen. I believe, at that point, I may have been in Vietnam a little too long.”

Walters was transferred to another unit, and having been promoted to sergeant, he got his own hooch to himself. But his fortune was short lived. His hooch was destroyed in October 1971 by Typhoon Hester, the most destructive storm to hit Vietnam since 1944.

Walters left Vietnam for good in December 1971, making it home just in time for Christmas. The Army was downsizing as the Vietnam War was winding down, but Walters was told he could continue his career if he accepted a reduction in rank and went into the student nursing program.

He attended Penn State University. In just a few months, he had transitioned from the jungles, rice paddies, and war zones of Southeast Asia to a place known as “Happy Valley.”

“Talk about your culture shock,” he says.

Walters finished his degree in just three years. As a student, he trained at Penn State’s Milton S. Hershey Medical Center. He lived in student apartments derisively called “the kennels.”

But as Walters comments, “I had no gripes. After all, I knew what it was really like to live in a kennel!”

He also had a student nursing clinical rotation on a psychiatric ward at the VA Hospital in Lebanon, where half of the patients were Vietnam veterans.

After graduation and being promoted to 1st lieutenant, he worked at Fort Indiantown Gap in Lebanon County, helping Vietnamese refugees settle in the United States in 1975. He was awarded a Humanitarian Service Medal for his efforts, the first of its kind.

He also participated in the U.S. invasion of Panama in 1989-90 and in the 1990-91 Gulf War as part of a unique 18-man Forward Surgical Team (Airborne) as an operating room nurse.

Walters retired from the Army in 1992 at Fort Bragg, North Carolina, as a major. He and his wife, Sue, currently live in Hershey. They had one son and one daughter, both of whom joined the military, although their daughter passed away unexpectedly.

They are currently raising a female yellow Labrador puppy, named “D” in honor of 1st Lt. Howard D. Payne, who perished in Vietnam on his first mission as a scout dog commander.

Walters is busy working on his fifth novel, which depicts the life of a scout-dog handler and his faithful dog in Vietnam.

Reflecting on his Army years working with dogs, Walters says, “I have a strong affection for military working dogs. I considered them as fellow combat soldiers. If it weren’t for them, I probably wouldn’t be here today.”

Robert Naeye is a Hershey-based freelance journalist. His website is robertnaeye.com.