Russell “Doc” Walters had one of the more unusual tours in Vietnam, working with Army scout dogs and combat tracker teams. First trained as an animal care specialist, better known as a vet tech, his role in the war evolved into dangerous combat missions.

Walters was born into a military family on Dec. 4, 1951, at a military hospital in Frankfurt, Germany. His paternal grandfather, Russell “Squirm” Walters, earned a Purple Heart serving in France in World War II.

Walters’s father, Russell “Buck” Walters, served for 20 years, first in the Army Air Corps and then in the regular Army. He was stationed in the Aleutian Islands during World War II, waiting for a Japanese invasion that never came.

The family has a tradition of giving nicknames to the children to avoid confusion. Doc Walters’s original nickname was “Bud,” because he was his father’s little buddy.

Growing up as an Army brat, Walters learned how to adjust to new surroundings as his father was transferred from base to base. This included three transatlantic voyages on ships and attending 23 different schools. One of his fondest childhood memories was learning to ski in the French Alps when he was in sixth grade.

In the late 1960s, his father retired from the Army and moved the family back to his hometown of Lewistown, Pennsylvania. Walters graduated from Lewistown-Granville High School in 1969. Along with two of his fellow students in physics class, Walters decided to join the military.

“I joined the Army for obvious reasons. I didn’t want my Army dad to kill me for joining any other branch of the service,” says Walters.

Walters asked when he could leave for training. When the recruiter replied “next week,” Walters signed up, even though he was only 17.

Walters went through basic combat training at Fort Jackson in South Carolina. He then moved to Walter Reed Army Medical Center in Washington, D.C., for his advanced individual training. There, he had a chance opportunity to salute Gen. William Westmoreland, who had recently commanded all American forces in Vietnam.

Walters received his special veterinarian training at the Forest Glen Annex, a 10-minute bumpy Army-bus ride into Maryland. There, the Army prepared mice, rats, guinea pigs, beagles, and rhesus monkeys — shipped in from the jungles of India — for government experimental research projects.

“Weekend duty at the monkey house was no picnic, especially if a monkey escaped his cage. That’s where I learned that a 17-pound monkey on the loose could kick my butt,” says Walters, who adds, “Taking care of puppies at the adjacent dog kennel complex was a lot more fun than cleaning monkey cages, that’s for sure.”

After eight weeks of veterinarian training, Walters graduated in the vet tech class of ’69. He was then sent to Fort Benning, Georgia, for temporary duty to become familiar with scout dogs. The three-month course for dog handlers included 60 Army soldiers, along with 18 Marines, who were “absolutely crazy,” according to Walters.

During his time at Fort Benning, Walters assisted in providing medical care for hundreds of German shepherds who were preparing for scouting missions in South Vietnam.

Even after being trained for obedience, the German shepherds could be aggressive, so they were usually muzzled before being treated by veterinarians. Still, Walters was bitten three times during his tenure as a vet tech.

And, he says, “One wise-guy handler wanted to know if I had all my shots up to date after his dog bit me. He didn’t want his dog catching any diseases from me!”

After a final week of escape and evasion training, Walters got two weeks’ leave to visit his family in Pennsylvania. Then the Army sent him to Camp Gorvad in South Vietnam to serve with the 1st Cavalry Division.

He was assigned not to a scout dog unit but to a combat tracker platoon. He was part of four teams consisting of five men and a Labrador retriever. Their job was to walk point, catch up with a retreating enemy, and reestablish contact.

While playing basketball on just his second day, his base experienced a sudden mortar attack. But Walters kept playing while his fellow players scattered to the four winds, leaving him alone to make an easy layup while shrapnel flew by his head.

After the all-clear siren, his platoon mates returned and told him, “Hey, Doc, if you want to survive the rest of your tour in ’Nam, you better store the sound of incoming in that gray matter of yours for future reference.”

The nickname “Doc” stuck, and it remained with him for his two years in Vietnam.

Conditions on base were primitive. Sometimes their water tanks went dry because the support battalion forgot to deliver their weekly resupply. Facilities for defecating, urinating, showering, and sleeping were far from ideal, to put it mildly.

During off time, the men would play basketball and cards or watch their Labrador retrievers run through a makeshift obstacle course. And, as Walters said, most of the men were either a “head” or a “juicer,” meaning they either smoked marijuana or drank alcohol (but only in the rear area and never during combat missions). But Walters was neither.

He also treated some of his platoon mates for gonorrhea, which required administering two large IM doses of penicillin, one for each buttock.

“The biggest advantage of being treated for gonorrhea by me was that it never got entered into the soldier’s official medical records,” says Walters. “Contracting the ‘clap’ could result in official military discipline by the soldier’s commander.”

The worst dog injury he treated at Camp Gorvad was a German shepherd hit with shrapnel fragments above the left eye. Walters had to perform the minor surgery using a local anesthetic to remove the metal fragments from the wound.

“The dog healed nicely and was returned to duty soon after,” recalls Walters.

“Doc” Walters’s story will continue in next month’s issue of 50plus LIFE.

Robert Naeye is a Hershey-based freelance journalist. He also authored the vaccine article beginning on page 4. His website is robertnaeye.com. 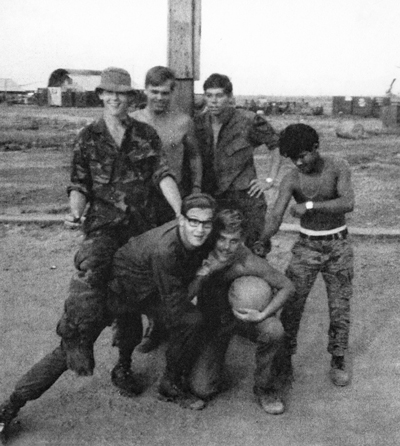