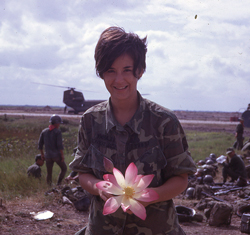 Soldier Stories: Just 21, She Ran a Rec Center and Lent an Ear to Enlisted Men

One of the largely forgotten chapters of the Vietnam War is the service of thousands of women, 68 of whom paid the ultimate sacrifice. And contrary to popular belief, not all of the women served as nurses, and not all of them were even official members of the military.

Consider Debby Moore, née Debby Alexander. She served two tours as a civilian in South Vietnam. She ran recreation centers for enlisted men at four different locations. At the tender age of 21 she was the youngest woman to run one of these centers.

Moore was born in Stockton, California, on Dec. 6, 1946. She was the eldest of four daughters. In World War II, her father piloted a B-29 bomber in 13 raids over Japan. And after the war, he served as an Air Force liaison officer.

She graduated from San Francisco State University in 1968 with a degree in sociology and elementary education. Unlike many Americans at that time, Moore felt a calling to serve her country, like her father.

Her college academic counselor told her about the Army Special Services program, which hired single women with college degrees to run recreation centers for enlisted personnel.

“I was told they had all kinds of exciting positions in places like France, Italy, Germany, and others. But after putting my name on the dotted line, I learned they were primarily seeking young women for Vietnam,” she recalls.

Moore and other civilian women received no special training before flying to Vietnam. She arrived in Saigon on July 2, 1968. After her plane landed, she recalls, “The first thing that hit me was the oppressive heat and the horrid smell.”

Moore received three days of training to help her learn military rules, regulations, rank structure, and jargon. She was also taught a few basics about Vietnamese language and culture. But most of what she learned was from OJT: on-the-job training.

She and her supervisor boarded an Air Force C-130 cargo plane laden with crates. They were destined for Sóc Trâng in the Mekong River Delta, in the far south of the country. Her supervisor suggested the troops would be excited to meet “the new girl.” As the plane landed, they saw trucks coming toward them.

“See, Debby, they’re coming to see you!” her supervisor exclaimed.

But as Moore wryly notes, “That flattery lasted all of about 30 seconds because we quickly learned the airfield had been without beer for two weeks. Most of the cargo we were carrying was beer.”

Shortly thereafter, she met Louise Phelan, the rec center director. She told Moore they were the only two “girls” on a base with 400 men.

They lived in a tiny room in the same barracks as junior medevac helicopter pilots. The two women had a cramped living space surrounded by an 8-foot-high wall. But there was a gap between the top of the wall and the ceiling, enabling Phelan and Moore to overhear the men’s conversations. They learned that men gossip just like women.

But she quickly adds, “The guys were great. They adopted us like sisters. They were very protective. They always made sure we got to the bunker when we started getting hit. But they also teased us unmercifully.”

Moore’s job was to provide a home away from home, a place where the enlisted men could relax and feel safe away from their officers and sergeants.

The rec centers had no alcohol, but everything was free: coffee, Kool Aid, popcorn, ping pong and pool tables, and musical instruments. Phelan and Moore organized social events, parties for local children, and even pie-eating contests.

The women learned about the different missions of the men so they could talk to them and empathize with their struggles. The soldiers would often come to the center after days of grueling combat and talk to the women as if they were big sisters.

But Moore says the soldiers’ biggest concerns were always with the enemy, and the Viet Cong was never far away. 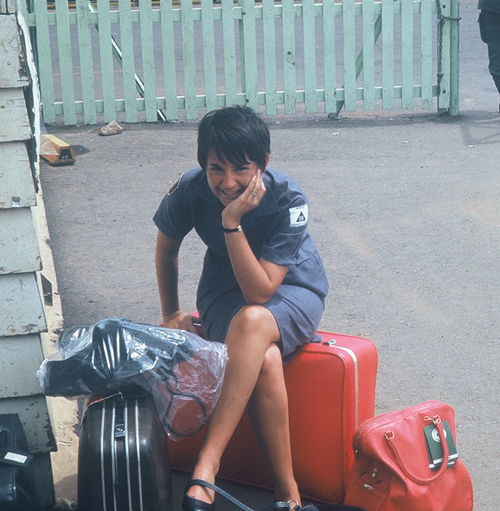 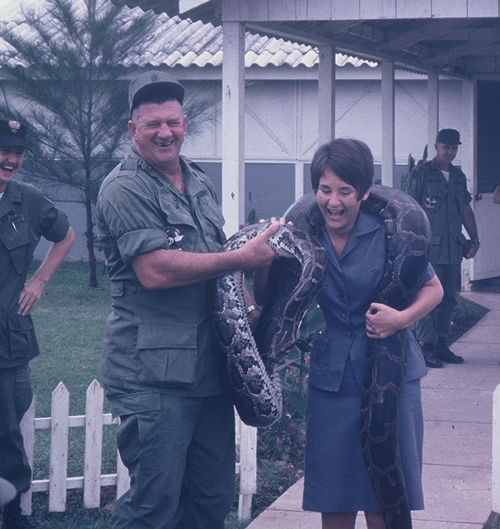 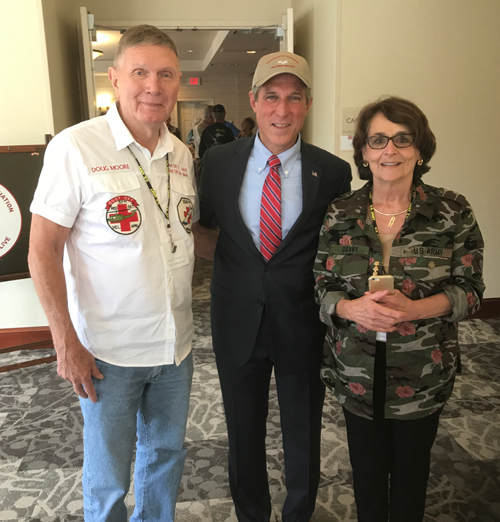 She saw plenty of evidence of enemy atrocities. One day, she saw a young girl missing both hands. Viet Cong guerillas had cut them off when her family was unable to provide the insurgents with rice.

Another time, she learned that the Viet Cong had killed about 10 local boys. The guerillas cut off their heads and rolled them through a village as if they were soccer balls.

Another day, a soldier told Moore about how his unit ventured into what was thought to be a friendly village. A little Vietnamese girl carrying a bouquet of flowers came out to greet the squad leader.

When he leaned over to receive the flowers, a hidden insurgent detonated a C4 explosive pack on her chest, killing her and the squad leader and wounding several men.

“After witnessing that carnage, this young soldier was willing to take out every Vietnamese he saw. I talked with him for a long time, and I encouraged him to see his unit chaplain. But even now, 50 years later, I still ache for him and all the other young men and the choices like that they had to make. It was just unbelievable,” says Moore.

And all too often, Moore would find out that men she had gotten to know were killed in action.

She recalls eating breakfast one morning with one of the medevac pilots. Moore reminded him that his unit was having a party on Friday night. He replied, “Deb, I just don’t have time for that kind of stuff.”

He was killed hours later.

“I was the last American girl he saw,” says Moore. “It was just so hard to understand that he wasn’t going to come back. That was one of the harsh realities we faced in Vietnam, and there were many others.”

Still, Moore has many fond memories of her time in Vietnam, which included six-month stints near the towns of Cu Chi, Phu Thai, and Dong Tam.

“During my encounters with these incredible men, I learned a lot more about the human spirit than I ever would have learned in all those days in my sociology and psych classes. And rarely a day goes by without me being reminded of their bravery, fortitude, and sacrifice,” she says.

After her second tour, she married an Army lieutenant and worked for a bank on Wall Street. The couple later moved to San Francisco, Thailand, and South Korea and had a son and daughter.

In April 1978 they moved back to California, where she worked as supervisor of children’s programs and services for the City of Los Altos from 1980 to 2000. The couple later divorced.

But in an almost fairy-tale story that even a creative Hollywood screenwriter could not dream up, she would later marry Doug Moore, a medevac helicopter pilot whom we profiled in last month’s issue.

The two had met several times in January 1969. And Moore flew her in his Huey from Sóc Trăng to her new base at Cu Chi. But the two went their separate ways in the turmoil of the war.

But on Veterans Day in 2013, Doug was speaking at the Vietnam Women’s Memorial in Washington. After he finished his talk, Debby tapped him on his shoulder and said, “Hi, Maj. Moore. I’m Debby from California. Remember me?”

The two started corresponding by email and eventually went on a trip together to Vietnam in August 2014. During that tour, Doug asked Debby, “Would you marry an old, worn-out helicopter pilot like me?”

Contemplating her life, Debby says, “We currently live in Haymarket, Virginia, a small community just south of the D.C. metro area. After meeting and marrying my true hero, Doug, I can’t help reflecting on the fact that I have had 32 addresses in my lifetime and have lived in four different countries. Truly blessed I am!”

A Bullet Through the Helmet: A Vietnam Dustoff Pilot’s Memoir