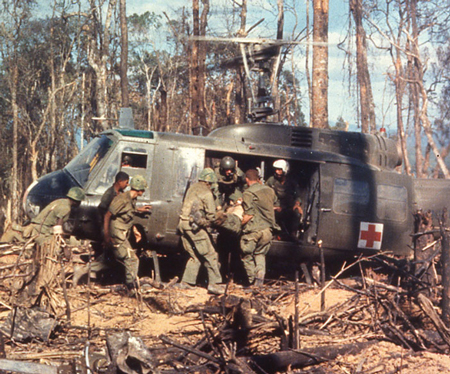 As a medevac helicopter pilot during two tours in Vietnam, Douglas Moore survived 1,874 combat missions. Some of those missions left his Huey chopper riddled with bullet holes.

And in one particularly harrowing mission, Moore escaped death by a fraction of an inch.

Yet this pilot managed to evacuate 2,782 wounded patients.

“I honestly believe that some of those guys went on living or had limbs saved because my crew and I could help,” says Moore.

Moore was born in the small town of Keiser, Arkansas, in September 1936 and was raised on a small cotton farm nearby. He recalls doing what all the boys did in this corner of northeast Arkansas: joining the Boy Scouts and playing sports.

After high school, Moore attended Arkansas State University, where he graduated in February 1959. During that period — the height of the Cold War — all physically fit men were obligated to take ROTC training during their first two years in college.

But Moore volunteered for additional training during his junior and senior years because he anticipated military service and wanted to be an officer. He joined the Army right out of college so he could learn to fly airplanes.

“As a youngster, I had an urge to fly, and the military offered flight training,” he says.

He first trained on airplanes at Fort Rucker, Alabama, where the instructors often put the students through difficult situations that they might actually encounter in combat.

By the early 1960s, the Vietnam War was intensifying. The U.S. Army realized that helicopters were of greater need than airplanes, so it started training more helicopter pilots. In 1963, Moore was sent to Camp Wolters, Texas, to learn to fly choppers.

Moore was ordered to Vietnam in October 1964, where he served in the 57th Medical Detachment out of Saigon. These medevac units were known as Dust Off, for their call sign.

At this time, the American war effort was just gearing up; the U.S. role was mainly advisory. Most of the patients that Moore flew to hospitals were South Vietnamese.

After a year in South Vietnam, Moore was transferred back to the U.S. and then to Japan, where the U.S. built six large hospitals in the Tokyo-Yokohama area.

Due to the poor road system in this heavily populated area, the Army decided to use helicopters to move patients. In his two years in Japan, Moore’s relatively small helicopter unit transported 63,000 patients.

After his time in Japan, the Army ordered Moore back to Vietnam for a second tour of duty, from August 1968 to August 1969. At this point, the war was raging, with about 500,000 Americans stationed in South Vietnam.

Moore commanded a Dust Off unit near Cu Chi that supported the 25th Infantry Division. There, as Moore describes it, he “got to see the war up close and personal.

“I remember being belly deep in a rice paddy or wedged down in a tiny hole in the jungle someplace with blood-soaked soldiers being crammed into the rear of my helicopter, and on many occasions, the bullets were coming through the helicopter with us. And that made it rather exciting at times. And it took a great toll on us,” he recalls.

The Dust Off crews were going in where battles were raging. The combat loss rate was 3.3 times higher than the rest of Army aviation.

Moore vividly recalls an eventful 18-hour period in December 1968 when he flew four medevac missions: one just after lunch, one just after dark, another at about 10 p.m., and a fourth around 4 the next morning. 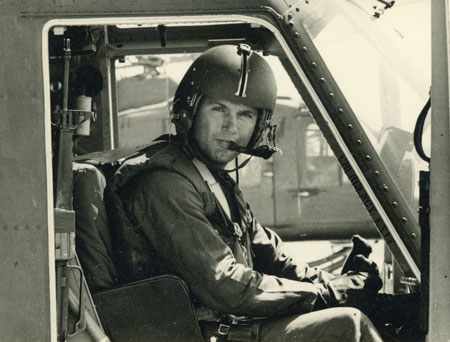 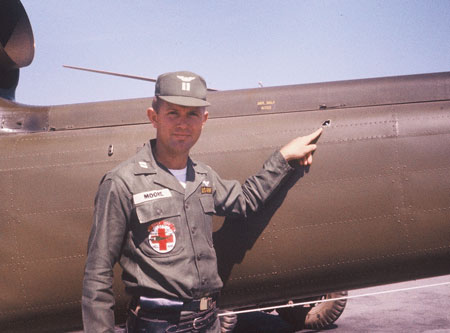 “I think I can safely say these were four of the most dangerous missions that I flew in Vietnam. We just got the crap shot out of us twice,” he says.

On the final mission, Moore’s unit got a call saying a nearby Army battalion had eight critically wounded men and they were surrounded by the enemy. Moore knew this mission would be treacherous. As he flew toward the battle, he could see flares and flashes of artillery.

Moore radioed the battalion commander to shut off the flares long enough to allow his Huey to land blacked out. The commander initially refused, fearing his unit would be overrun. But they reached a deal where Moore could land with his helicopter’s lights turned off and then take off under temporary darkness.

While landing, Moore could see wounded men scattered over a large area, so it took a long time to load the injured men. While on the ground, the enemy began firing at his helicopter and he could hear bullets striking the tail boom and back of his craft.

When there was one last man to load, Moore radioed the commander to ask him to shut down the flares while he took off. This time, the commander refused.

As Moore took off, tracers began coming up and all around his helicopter. As the Huey climbed, bullets started penetrating the cockpit. A round came up by his left knee and hit the lever that controls whether the helicopter goes up or down. It ricocheted and split his left thumb open.

“That hurt like a son of a gun,” says Moore.

Moments later he heard a scream right behind him. A round had hit one of the patients in the spine, inflicting a mortal wound.

And just after that, another round came in and hit Moore hard. His head sprung back and smacked the back of the seat. He kicked a pedal to the floor that put the chopper in a descending right turn only about 100 feet off the ground.

Moore instinctively grabbed the stick and pulled it to start climbing. He told his young copilot that he had been hit, and the 20-year-old took control.

If that weren’t bad enough, the fire warning light started flashing. Somehow, the Huey limped back to base, about 25 miles away, but landed with 37 holes from AK-47 rounds.

“That old gal took us back to Cu Chi despite the fact she was leaking every fluid aboard the aircraft,” says Moore.

But Moore was totally confused during the flight. He realized he couldn’t see out of his left eye, triggering fears of blindness, which would end his flying career.

He later found out what had happened by looking at bullet holes in his flight helmet. An AK-47 round flew through the windshield, hit the very lower edge of his helmet right between his eyes, penetrated the hard outer shell, and then exited by his left ear.

Moore survived several more close calls during his tour. Interestingly, Moore says that most of what he remembers about Vietnam are the good things, and that most of the bad things have been washed out of his mind over the years.

But he is quick to add, “When I think about Vietnam, I mostly think about the people I served with. I knew some crazy guys over there, and you need people like that to make it fun when fun is about all you had left to keep you going.”

Moore stayed in the Army until March 1989 and retired as a colonel. He earned numerous awards and medals for his 30 years of service, including the Distinguished Service Cross, two Distinguished Flying Crosses, a Bronze Star, and a Purple Heart.

He worked 25 years in healthcare administration but is now retired in the small town of Haymarket, Virginia, just south of the Washington metro area. He’s written a book about his Vietnam adventures, titled A Bullet through the Helmet, with all the proceeds going to a museum for veterans in Indiana.

Tragically, Moore lost his first wife of 53 years to Alzheimer’s disease. But on Veterans Day in 2013, he had a chance encounter with a woman named Debby Alexander, whom he had met in Vietnam in January 1969. They are now happily married.

We will tell Alexander’s remarkable story in next month’s issue.