Soldier Stories: Dead on the Drawing Board: The Controversial ‘Atomic Canal’

Like many young men of military age, Ken Weiler was fully prepared to serve in Vietnam. He had enlisted in the Army, received extensive training in tank warfare, and received orders to be shipped overseas.

But while on a two-week leave at home, he and his family received terrible news: Weiler’s older brother Alain had been killed in action in Vietnam.

Shortly thereafter, the Army notified Weiler that he was being granted a compassionate reassignment, meaning he was not permitted to enter a combat zone for a full year.

Weiler would avoid the risks of Vietnam, but this did not mean his remaining 2 ½ years of service would be dull. Among other things, he became involved in a project to use nuclear explosives to dig a new canal across Central America.

Weiler was born in the Bronx in July 1948 to an American father and a French-Canadian mother. He enjoyed a normal childhood on Long Island, playing baseball, football, and war games.

His father served in the Marines in World War II and had been wounded during the invasion of Saipan. But like many veterans, he rarely talked about his experiences.

Weiler admits that he was drifting after graduating from Hempstead High School in 1966. He was taking the easiest possible courses at Nassau Community College to boost his grade-point average.

Realizing that many of his friends were receiving draft notices, Weiler decided “to beat the Selective Service to the punch” by enlisting in the Army in 1968.

“I went into the military rather than getting into trouble. The Army was the best possible thing that happened to me,” he recalls.

Better yet, by enlisting for three years instead of being drafted, he could join the branch specialty that fascinated him since childhood: the heavy armor. 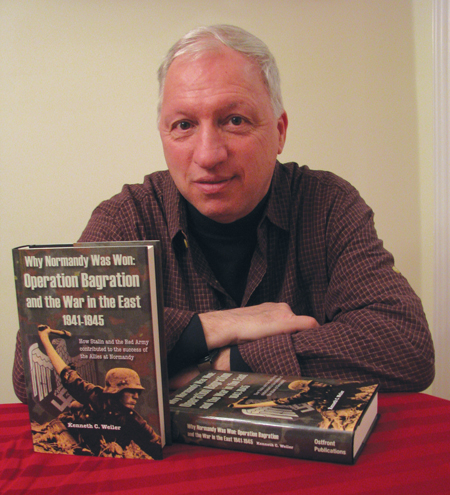 Weiler was sent to Fort Jackson, South Carolina, for basic training and then to Fort Knox, Kentucky, for armor school. For Weiler, this training was like a childhood fantasy, where stories from his history books turned into reality.

Weiler traveled home to Hempstead, Long Island, for a two-week leave before he was scheduled to go to Fort Ord in California, where he would then be shipped to Vietnam.

It was in Hempstead that he learned the tragic news about his older brother, whom Weiler looked up to for guidance and inspiration. Weiler says Alain was “very religious.” Alain was thinking of going into the priesthood but joined the Army to save the world from “godless communism.”

“I was so numb with all the levels of shock. I would just sit there and stare at the wall,” says Weiler, who is quick to add that despite his sense of trauma and sadness, he never felt helplessness.

After the funeral, the Army reassigned Weiler to Fort Belvoir in northern Virginia, not far from Washington, D.C.

To Weiler, his new assignment made no sense. He reported to the Department of Engineering & Military Science in the U.S. Army Corps of Engineers. He never saw a tank in his two years there.

“Perhaps it was just the Army way of doing things,” he says.

Life at Fort Belvoir was much cushier than anything he had previously experienced. The food was good and plentiful, and the living accommodations were comfortable, with modern air conditioning.

The officers and enlisted men were highly educated engineers or involved in engineer training. Most were involved in projects such as building bridges and dams.

Weiler was assigned to type notes in meetings involving the most interesting and controversial project of all.

The Navy was building aircraft carriers and ships that could no longer fit through the Panama Canal. The Department of Defense was considering building a new canal through the small nation of Nicaragua, taking advantage of its large lake (Lake Nicaragua) to minimize construction.

What made the project controversial was the idea of detonating nuclear munitions from decommissioned warheads to excavate a trench.

“The engineering plan was conceived that the exploding nuclear charge would cause a vacant chamber to be created by the melting soil, which would then collapse, forming a crater. The series of craters would then form the canal,” Weiler recalls. “I thought it was the coolest project in the world.”

According to the plan, the liquefied soil would chill to form a hardened shell, which would prevent radiation from leaking to the surface.

But the project never really got off the drawing board.

“When news of the atomic canal reached public consciousness, the response was overwhelmingly negative, and there were few congressional supporters for the project. As such, the atomic canal died a slow and quiet death,” Weiler says.

Six months before his enlistment ended in February 1971, and after being promoted to staff sergeant, Weiler was transferred to the Pentagon to serve with the Safeguard Anti-Ballistic Missile Project.

He had very little work to do but sometimes helped write reports for congressional aides. But this missile system was never built, mainly because the U.S. and the Soviet Union agreed to reduce their nuclear stockpiles.

During his time at Fort Belvoir, Weiler met a woman from central Pennsylvania named Sally. They married in 1972, shortly after he left the Army. Sally worked in the intelligence community.

In recent years, Weiler has fulfilled yet another childhood fantasy: writing three books about World War II. He has taken particular interest in the Soviet-German conflict, by far the largest, deadliest, and most consequential front in the war.

Weiler is quick to point out a truth that many Americans fail to realize: the Red Army killed far more German soldiers and destroyed far more Nazi equipment than did their American and British counterparts.

Weiler is currently working on his fourth book (https://weilerpublications.com/meet-ken). He is happy to have plenty of spare time to work on his book projects, participate in his local historical society, and volunteer at the Eisenhower National Historic Site in Gettysburg. He also gives lectures on military history.

Robert Naeye visited Nicaragua for several days in February 2013 and took a two-hour boat ride on Lake Nicaragua. He’s glad no canal was ever built there with atomic bombs.