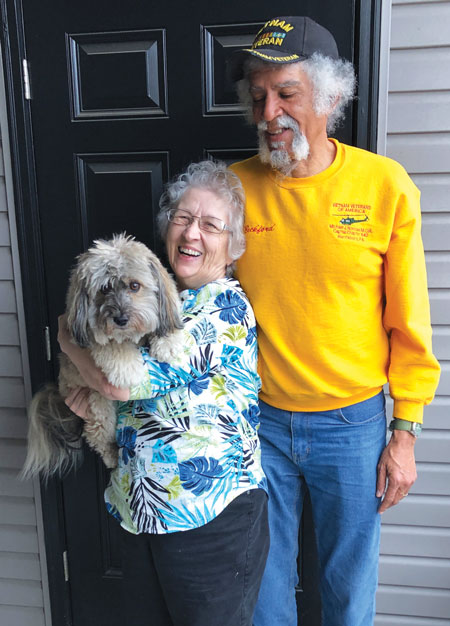 Former Air Force E-4 Edwin “Eddie” Beckford nearly died in an airplane accident before even reaching Vietnam. And once there, he was targeted by an enemy sniper.

But Beckford lived to tell his tale, which includes 16 years as a Christian missionary in Israel.

Now living in central Pennsylvania, Beckford was born on Manhattan’s East Side in 1947. His father had served in the Army in World War II but never talked much about his experiences.

Beckford grew up in Manhattan, but after his parents divorced and his mother remarried, the family moved to Roosevelt, New York, on Long Island. His stepfather had a good job with the New York Times and bought a house on 10 acres of land.

All during his childhood Beckford regularly attended church, giving him a solid religious upbringing. He went to a Catholic church as a young kid, but later attended a Protestant church.

“This was good for me; I never got in trouble,” he recalls.

One of his fondest memories from youth is playing a lot of chess.

“I was better than average,” he modestly asserts.

Beckford graduated from high school in 1964 at age 17. His mother was a practitioner of tough love, forcing him out of the house to make sure he would earn a good life on his own. He went to an Air Force recruiting station in Manhattan and passed all the mental and physical exams.

The Air Force recruiter told Beckford he would serve four years but would probably not be sent to Vietnam. The recruiter also said Beckford would be trained as a jet-engine mechanic. These were both lies — a common occurrence during the Vietnam War era.

After basic training at Lackland Air Force Base in San Antonio, Texas, Beckford was stationed at Laughlin Air Force Base in Del Rio, Texas. But instead of learning to fix jet engines, he ended up being assigned to a department called roads and grounds.

Growing up in and near New York City, Beckford used public transportation and never learned to drive. Now, he was driving garbage trucks, dump trucks, asphalt rollers, and other vehicles.

But even driving garbage trucks had its drama. He had to drive the vehicle to the very edge of a cliff before dumping the waste into a landfill.

In 1966, Bedford received orders to go to Vietnam. During a preliminary exercise in Fayetteville, North Carolina, he experienced Jim Crow racism for the first time. Beckford, along with a team of his fellow comrades, entered a diner to get a meal and were told that “the coloreds” were not allowed inside.

“I’m ready to go to Vietnam, and I might die to keep your place open,” he said before he, and everyone in his unit, walked out.

But when serving with his Air Force unit, the 819th Civil Engineers, Beckford never encountered discrimination like that.

“We didn’t have racism. That was awesome,” he recalls.

Beckford also points out that white officers treated him and other black servicemen in an appropriate manner.

During his flight to Vietnam across the Pacific Ocean on a C-130 Hercules, Beckford was horrified to look out the window and see flames. An engine had caught on fire. Beckford recalls making the typical foxhole prayer: “God, please get me out of here in one piece.”

Fortunately, the plane made a successful emergency landing on Wake Island, although the runway seemed awfully short to Beckford.

Arriving in Vietnam in 1966, Beckford was introduced to a strange new reality. While driving down a highway toward Phù Cát Air Base, he saw women along the side of the road pulling their pants down, defecating, urinating, and laughing at the Americans.

Beckford spent a full year at Phù Cát, his entire tour in Vietnam. There, he and his colleagues set speed and efficiency records for pouring concrete for runways, among other record-setting achievements.

The base was well protected, so Beckford never experienced brutal combat. But he had one near-fatal incident that haunts him to the present day.

He was sent outside the base one day to fill up a dump truck with sand and clay from a nearby landfill. Suddenly, bullets were whizzing by. An enemy sniper had singled him out and kept shooting and missing.

Beckford never saw who was shooting at him. Sensing extreme danger, Beckford drove back to base with only half a load. But an officer ordered him to return to the landfill alone and return with a full load. To Beckford’s great relief, the sniper had vanished.

On another occasion, he was in a remote area when his convoy left without him. Fortunately, some nearby South Korean soldiers helped him get back to base. “God, I owe you,” thought Beckford.

After his deployment in ’Nam, Beckford returned to an Air Force Base in northeast Arkansas. His favorite job was driving a large vacuum-cleaning truck slowly across runaways to keep them clear of debris.

Beckford left the service in 1968. He initially returned to New York but later moved to New Jersey and then Virginia, working various jobs. He got married and had a son, but the marriage didn’t last long.

Beckford met a woman named Lura around 2000; he had served with Lura’s late husband in Vietnam. She had previously done missionary work in Israel and planned to return, so she invited Beckford to join her. They got married in Cyprus in 2001.

The Beckfords served as Christian missionaries in Israel from 2001–2017, working for Jewish Outreach International. The Beckfords handed out Bibles and worked with Jews and gentiles who believed in Jesus.

Beckford also got to revive one of his childhood interests when he helped form a chess club/storefront church.

In 2009 Beckford took a DNA test and found that he has Igbo ancestry. This ethnic group lives mainly in southern Nigeria. Some Igbo members practice Judaism and identify as Jews from the tribe of Gad.

The Beckfords had good relations with secular Jews and Muslims. But there was tension with the overall majority of Orthodox Jews. One day, they firebombed the Beckfords’ storefront church and chess club. They later made a second attack by pouring gasoline around the doors, with people inside.

When their work was completed, the Beckfords returned to the States in August 2017 and settled in central Pennsylvania, near Lura’s family.

The Beckfords are still working with Jewish Outreach International. But for Eddie Beckford, his close brushes with death live on to this day. He has recurring dreams of being left behind.

Like many Vietnam veterans, Beckford suffers from post-traumatic stress disorder. For years, Beckford was in denial, concerned about the stigma of mental illness. But now, he meets with other Vietnam veterans about once a week to help cope with PTSD.

If you would like to meet Beckford and hear him tell his story in person, he is scheduled to speak at the Central Pennsylvania Vietnam Round Table meeting near Harrisburg on Nov. 14. Visit centralpavietnamroundtable.com or call (717) 545-2336 for details. 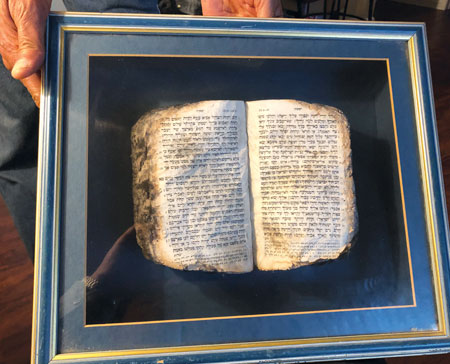