COVER STORY: Astronomy on the Susquehanna

We live in a modern age awash in light. It’s inside our homes, on our streets, and on our computer screens.

For amateur astronomers, light is the bane of their existence. It washes out the faint light of distant stars, an environmental blight known as “light pollution.”

From a populated urban area, you can see a few dozen to a few hundred stars at night. But venture out into a remote area far away from city lights, and you can see thousands of stars speckling the sky from horizon to horizon.

With large cities such as Philadelphia, Lancaster, and Harrisburg, southeastern Pennsylvania is not exactly a haven for astronomical observatories.

This posed a challenge to the Exelon Corporation, whose top executives decided several years ago to construct an observatory as a vehicle for inspiring students to pursue careers in science and engineering.

But with the help of amateur astronomer Al Ryan, also the company’s assistant general counsel, Exelon found a good site on its own land: Muddy Run Recreation Park, about 15 miles south of Lancaster along the Susquehanna River.

Ryan, who spearheaded the effort to build the Muddy Run Observatory, grew up in Florida, not far from Cape Canaveral. As a child, he built telescopes and watched NASA launch rockets into space, which inspired a lifelong interest in astronomy.

Ryan went off to college at the University of Chicago, graduating in June 1972. In December 1976 he earned a law degree from the University of Florida. For many years he practiced law in Chicago, eventually becoming the chief environmental attorney for the state of Illinois.

After changing jobs several times, he ran his own law firm in Chicago for eight years. His wife, Barbara, who is originally from Harrisburg, encouraged him to look for a job that would offer steadier income.

Ryan ended up taking a position with the Philadelphia Electric Company in 1998, which later merged with a utility in Chicago to form Exelon.

As he was moving around, Ryan was raising two daughters. The younger of the two, Layla, developed a strong interest in astronomy. She majored in astrophysics at the University of Illinois. 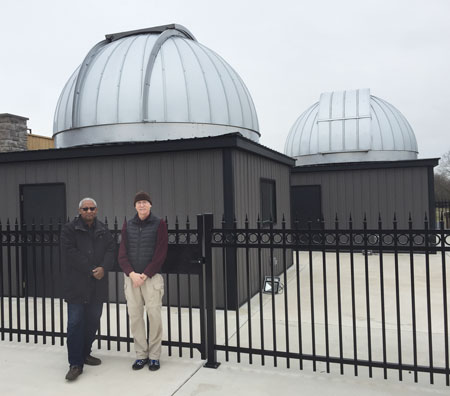 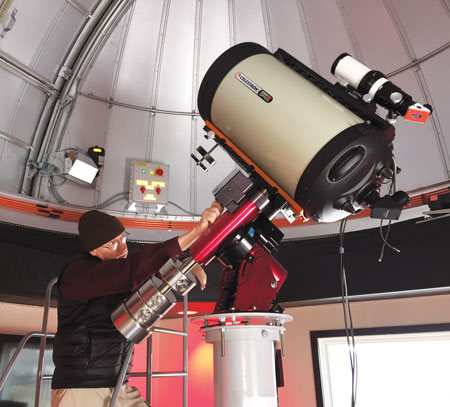 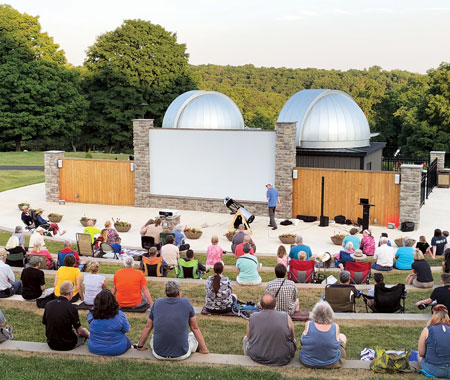 Ryan credits her with rekindling his childhood interest in astronomy. He built and bought telescopes, each scope larger than the previous one. He later constructed an observatory in the backyard of his house in Glenside, Pennsylvania.

Al and Layla frequently visited Exelon’s Muddy Run Recreation Park. Layla once mentioned that a helicopter landing pad inside the park would be a great place to build an observatory.

“At the time, I didn’t really think much of it,” says Ryan.

Tragically, Layla passed away from a long-term illness in 2006 at age 24. To honor Layla, her parents established a scholarship for astronomy students at the University of Illinois.

As Exelon started toying around with the idea of building a public observatory, it turned to Ryan to advise the company on where to build it and what equipment to include.

Ryan recalled his daughter’s idea of building an observatory on the Muddy Run helipad. To test this idea, he partnered with local amateur astronomers to hold a stargazing event at the site in 2015.

“Even though there were thunderstorms, we had a huge turnout, which surprised company management. We had 100-125 people on a stormy, cloudy night. People didn’t realize that we have enough interest in the region, so we made it an annual event,” recalls Ryan.

The next year’s stargaze drew an even larger crowd — and that’s when the whole idea blossomed to build the observatory at Muddy Run. Besides the helipad, the park had a visitor center, facilities for handicapped people, and parking spaces for hundreds of cars.

The night sky is dark enough so you can see around a thousand stars on a clear, moonless night. And yet it’s close enough to major population centers that public events draw large crowds.

Exelon based the observatory’s landscaping on a design created by Ryan’s wife Barbara, while Ryan decided on two large amateur telescopes, one built by Celestron and the other by PlaneWave.

Construction began in 2016, and the doors opened to the public in October 2017.

The Rittenhouse Astronomical Society of Philadelphia is the primary amateur organization that runs the observatory. Ryan is a member of its board of directors, making him the perfect liaison between company and club.

RAS president Ted Williams says his group was involved in the project from the very beginning, calling the observatory “the perfect merger for an astronomy club that was trapped in Philadelphia that wanted a darker site.”

But Williams is quick to add that running the observatory is a team effort. The Astronomy Enthusiasts of Lancaster County and the Harford County Astronomical Society in Maryland play important supporting roles, providing telescopes and educators.

Muddy Run hosts a monthly open house for the public, where people can come to stargaze using the observatory’s two telescopes and additional portable scopes brought by amateurs. These events include talks by scientists and amateurs and workshops in astrophotography.

Exelon modified the visitor center to include an astronomy section, comprising a hallway of astronomical photos and models to help educate the public about space science. The visitor center also has several classrooms.

The observatory itself has a giant outdoor projection screen, where speakers can show their photos and where telescope images can be displayed to the public.

The observatory has already attracted significant interest from local companies, libraries, and schools. Ryan says that Exelon hopes that Muddy Run will serve as an inspiring example for what corporations can do to reach out to their communities. There’s even talk about adding more telescopes and a planetarium to bolster education programs.

Astronomy is one of the few remaining fields of science where amateurs can play important roles in cutting-edge research. Using the observatory’s two telescopes, club members will soon be studying stars that vary in brightness, asteroids that pass in front of stars, and planets in other systems that pass in front of their host stars.

“We’re really proud of the facility,” Ryan says. “But we’re even more ecstatic about all the possibilities available to us for extending our vision to the community, enlightening minds, and inspiring others.”