When someone you love is struck with a neurological disease, such as Parkinson’s or Alzheimer’s, life can undoubtedly become a trial for both the caregiver and the patient. Because of the slow but steady progression of these diseases, maintaining morale can also be a challenge.

But recently, some new advances with exercise have proven helpful to Parkinson’s patients. Rock Steady Boxing is a new concept in the ongoing fight against a Goliath.

Susan “Sue” Ludwig was born to help people. As a fitness coordinator and personal trainer, she knew she could make a difference in people’s lives through exercise.

Her belief was confirmed when she saw a news outlet run a story on Rock Steady Boxing.

The Mayo Clinic explains Parkinson’s disease as a nervous system disorder that worsens over time. The initial symptoms, such as tremors, are barely noticeable at the disease’s onset.

Although there is no cure, medications do prove helpful, with surgery being an occasional option to regulate regions of the brain.

A 501(c)(3) nonprofit organization, Rock Steady Boxing “gives people with Parkinson’s disease hope by improving their quality of life through a non-contact, boxing-based fitness curriculum,” according to RSB’s website.

The program’s mission “is to empower people with Parkinson’s disease to fight back.”

Rock Steady Boxing is member of the Parkinson’s Circle of Care Alliance, which is “a nonprofit created to help provide resources — such as educational materials, lists of neurologists and movement-disorder specialists in our area, information about local support groups, etc. — to people living in central Pennsylvania who have Parkinson’s disease and their caregivers,” Ludwig said.

It is through a series of exercises that RSB succeeds, Ludwig explained.

“Parkinson’s is a progressive disease that requires constant maintenance through medication and exercise, and just like any exercise program, you need to keep doing it to reap the benefits,” she said.

Each RSB class generally starts with a light cardio warm-up and stretching, Ludwig said, followed by a circuit of exercises that includes some combination of Parkinson’s-specific strength training, range-of-motion work, core strengthening, and boxing, as well as exercises to strengthen cognition and agility. 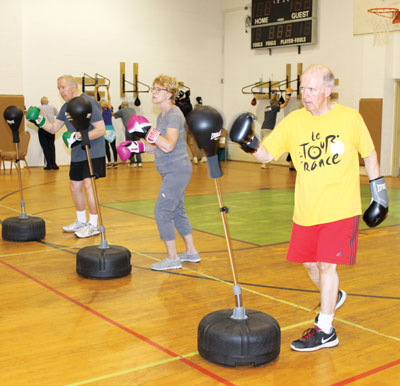 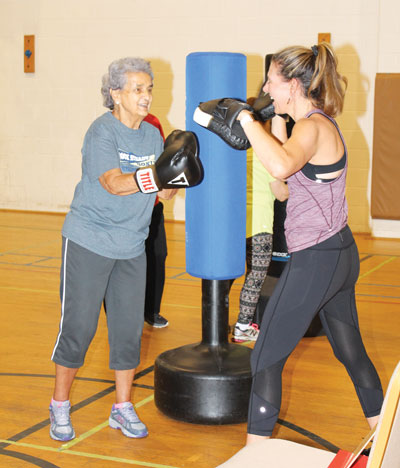 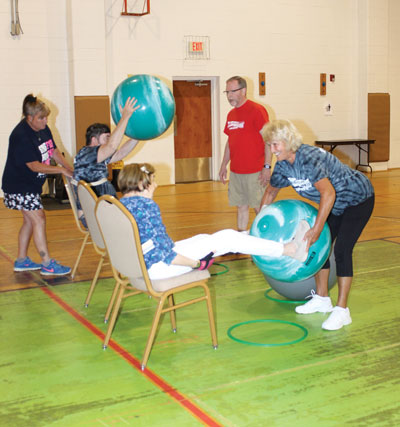 “Each exercise we do is designed to make improvements in areas that we know can become impaired by Parkinson’s,” Ludwig said.

Clients receive an initial evaluation to determine at which level of the program he or she can begin.

A central Pennsylvania native, Ludwig is now head coach/owner/founder of NeuroSci Fit and two Rock Steady Boxing locations in Lancaster County. RSB is in the process of adding two more locations, in Hershey and in the Reading area.

“In Parkinson’s, the part of the brain that is mostly affected is called the substantia nigra,” Ludwig explained. “It is responsible for smooth, coordinated movement. Having Parkinson’s disease is like having bad or broken-down connections or neural pathways in the brain.

“Neuroplasticity is why [RSB] works. When we get our heart rate up to around 80-85 percent of max, our brains become able to repair and to create new neural pathways more quickly,” Ludwig continued.

“Boxing, along with other therapies we provide, is a really fun way to improve balance, coordination, speed of movement, and flexibility, as well as non-motor symptoms.”

Ludwig smiled with pride as she related the story of Bill, one of the program’s many success stories.

“He was not able to walk to his mailbox because he was so fatigued and weak; his wife even retired so she could take care of him. After just a few months in class, he was able to go on vacation to the Cayman Islands and even walked 5 miles a day on the beach!”

To Ludwig, unlocking the mystery of this debilitative neurological disease was a personal challenge.

“My grandmother had Parkinson’s; she was diagnosed in her 40s. She was told to go home and rest, not exert herself, and that exercise would make it worse. Although that was the belief at the time, it was the worst possible advice,” Ludwig said.

“Then, about 10 years after she passed away, I had a client who had Parkinson’s. His physical therapist encouraged me to get certified in the Parkinson Wellness Recovery [exercise] program. I fell in love with the program because it was so effective and quickly knew this was my purpose in life!”

The newsletter described several studies that followed tens of thousands of Parkinson’s sufferers. Results showed a reduction in the risk of developing Parkinson’s if exercise is performed decades before the disease’s onset, such as in one’s 30s and 40s.

The studies also noted that the results could show a possible “reverse causation”: Exercise may not prevent Parkinson’s, but very early, presymptomatic forms of the disease may make people less willing to exercise.

Ludwig tries to keep her classes at a manageable level for each student, with each Rock Steady class running 90 minutes.

“We offer classes five days a week and encourage our members to participate in as many classes as possible,” she said.

Seniors make up the majority of Ludwig’s client base, with most being over age 65. The focus on Parkinson’s patients currently accounts for about 90 percent of her business.

“I’m beginning to feel a need to branch out into Alzheimer’s and multiple sclerosis as well,” she says.

For more information on Rock Steady Boxing, contact Sue Ludwig at (717) 271-3067 or check out www.rocksteadyboxing.org.

A 20-year veteran of The Philadelphia Inquirer, Melinda Williams is the managing partner of The Williams Group, a public relations and photography firm in Sadsburyville, Pa. Along with her photojournalist husband, Robert O. Williams, she wrote the book Wildwood’s Neon Nights & Motel Memories. www.thewilliamsgroup.info, melinda@thewilliamsgroup.info