her bright smile the only means of escape for the joy ricocheting through her body.

The Central Pennsylvania native has been no stranger to a stage in the meantime.

“I’ve been doing a lot of entertaining: a lot more senior groups, retirement communities, singing the national anthem at the Harrisburg Senators and Reading Phillies—a little bit higher up in the food chain,” Keller said. “So I’ve been quite busy with my entertaining since Senior Idol.”

Keller, 60, can now happily add another notable title to her entertainment resume: that of reigning Ms. Pennsylvania Senior America.

On July 30, Keller won the 2017 statewide competition, an annual talent and “inner beauty” pageant that strives to “emphasize and give honor to women who have reached the ‘age of elegance,’” according to its website (www.senioramerica.org).

As a result of her Senior Idol win, Keller said a representative from Ms. Senior America had checked in with her regularly, eager for Keller to turn 60 to meet the minimum age requirement for the pageant.

“I just love to entertain so much that I felt [the pageant] would give me another opportunity to meet a whole group of individuals that I could expose [my music] to; it would open up some doors for me,” Keller said.

Keller’s knack for performance dates back to her childhood, where in high school she won the local Junior Miss Pageant and frequently performed the national anthem.

After her two sons were grown, Keller reentered the workforce and revived her musical pursuits, earning roles in community theater and performing for service organizations, senior groups, and holiday parties.

“At 60 I think I’m feeling more confident and beautiful inside and out—I feel like I can do pretty much anything,” Keller said.

“She had exceptional confidence in her interview and was well spoken and intelligent. She radiated her enthusiasm for life with her million-dollar smile,” Russo-Caiazzo continued. “She was poised and regal in her evening gown and very articulate as she gave her heartwarming ‘philosophy of life.’”

“It was so much fun,” Keller said of the competition. “It was a very similar same kind of vibe as Senior Idol because we all were kind of in the same boat. We were all mature women … we all just wanted the opportunity to show that women over 60 can still be entertaining, productive, and beautiful.”

For the talent portion, Keller—who favors the “standards” and big-band music of the 1940s and ’50s—intended to perform what she calls her “signature song”: George Gershwin’s “Summertime” from Porgy & Bess. It is also the song that also clinched her PA State Senior Idol title in 2011.

But another contestant had already chosen “Summertime,” so Keller went with “Somewhere Over the Rainbow,” another of her favorites. In the end, the second-choice song selection didn’t matter.

“I was so overwhelmed [when] I got a standing ovation,” Keller, a fulltime OB-GYN triage nurse, said. “I felt really good about the day; I knew I did the best I could do, and I could not have done anything differently.”

Singing wasn’t the only talent on display that day, however. Keller’s fellow contestants, who ranged in age from 60-89, exhibited skills as wide ranging as pie baking, singing, dancing, and readings of original poetry.

Thirteen friends and family members came out to support Keller in the audience.

“They were screaming and yelling and carrying on,” she laughed. “It was really kind of one of those things where the energy was really high and contagious.”

Her supporters weren’t the only ones in need of a good holler. After the judges announced their decision and Keller received the crown, sash, and flowers, she paused before the outdoor photo shoot and turned to Russo-Caiazzo.

“As soon as I got outside, I said to Denise, ‘Is it OK if I scream now? I just feel like I have to scream!’” Keller said. “So I screamed. It felt really good.”

As the state winner, Keller “will represent women over 60 and help educate the public about senior life, while dispelling the myths of ageism,” Russo-Caiazzo said. “She will make appearances throughout the state, spreading the message that seniors still have a lot of life and a lot to give society.”

She will also represent Pennsylvania at this year’s national Ms. Senior America pageant, to be held Oct. 15-19 in Atlantic City, New Jersey. Keller’s husband will join her for the three-day competition, as will about 15 friends and family offering their support.

Pennsylvania has never had a national title holder, Russo-Caiazzo said.

If Keller does take home the national crown, her duties and opportunities will be similar to those of the state winner but on a grander scale, with country-wide recognition and exposure.

“She will continue her crusade to help educate seniors and show the world that seniors are the foundation of America, and they are still going strong,” Russo-Caiazzo said. “The sky is the limit for the national winner.”

Keller said she plans to take the October competition in stride, but that doesn’t mean she isn’t headed to Atlantic City with her eye on the prize.

“I’m going there for the fun of the whole experience,” she said, “but I have that competitiveness about me, and I’m sure as shooting going to do the best I can with the intention that I’m going to come away a winner.” 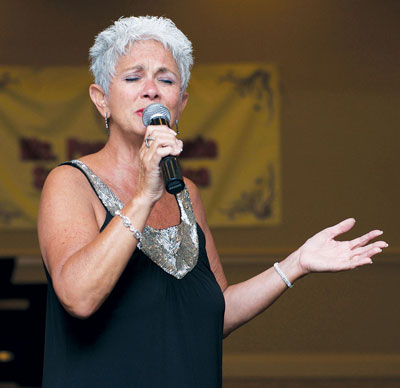 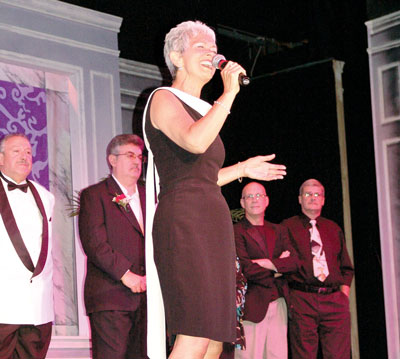 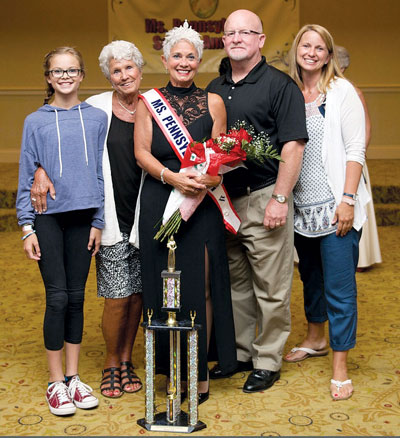 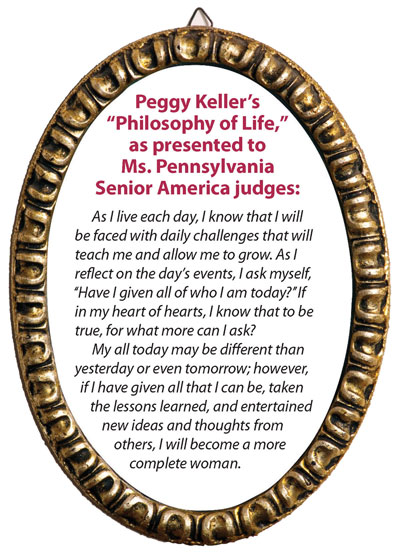