When Jack Billmyer was stationed at Fort Carson in Colorado Springs in 1972, the military decided to get serious about keeping young recruits out of trouble. Billmyer and the other young soldiers, who were the last Vietnam War draftees, were sent to learn how to ski.

“Since I decided to sign up for an extra year, I had the choice of which station to choose. I chose Colorado,” says Billmyer. “We were all young and single. The military wanted to keep us busy. They paid for ski equipment and lunch and sent us to Broadmoor, near Denver, now an Olympic training facility.”

As a result, “we drank a lot of beer and learned how to ski,” he remembers. “Everything was ridiculously cheap. We didn’t wear ski clothes then, just blue jeans and sweatshirts, with very long skis. I found it to be fun.”

The rest of the time in the Army he learned air defense, artillery, and management skills. While he never put his air defense and artillery skills to use, he developed a lifelong love of skiing.

“Now, I ski pretty fast. When you’re on a big mountain with big snow, you get the biggest charge,” he says with an enthusiasm that still infuses his description 50 years later.

‘Try to Catch Me’

While skiing continued to be a passion, Billmyer moved back to Hershey, Pennsylvania, and began work at a local building company. During the recessions of the late ’70s, he created his own building and renovation company, Jack Billmyer, Inc., in Hershey. He continues his work even at 70.

“I wear a t-shirt that says, ‘I know I’m an old skier; try to catch me,’” he says. “I remember my parents and grandparents — they looked old. I feel like there’s a lot of life in me yet and feel like I’m in my mid-30s.”

For Billmyer, skiing is the ultimate workout, although the sport has undergone many changes, which he has embraced.

“The old straight skis had a uniform width from tail to tip. Now I especially enjoy parabolic skis, which feature a deeper side cut, where the tip and tail are wider than the middle,” he explains.

“This type of ski provides much more edge to make contact with the snow. As such, your skis are easier to control with less exertion, and it’s easier to turn, which makes the sport so much more effortless.”

Billmyer has not switched to snowboarding because he would have to start from scratch with new equipment, although he notes that snowboarding saved the industry when skiing became less popular in the late ’70s.

“Over the years, I’ve built up top-of-the line equipment that most people don’t have,” he says. But since he skis nearly every weekend in winter, for Billmyer, the investment is worth it.

Locally, Billmyer and his wife, Linda, ski at Roundtop in York and at Elk Mountain in Union Dale, Pennsylvania. They also enjoy skiing in the Poconos, the Rockies, and Canada.

He explains that between climate change and local weather patterns, the local ski industry relies on machines that make snow.

“The local resorts blow snow at 30 degrees. Without that, we wouldn’t have a ski industry, though you feel the small, round spheres the machines make underneath your skis,” he says.

“However, skis function better on natural snow — Western or Canadian snow is a totally different base. That kind of powder skiing you don’t get here. You don’t feel anything underneath your skis — it’s so soft.”

According to Billmyer, no matter where you ski, the sport fosters an active lifestyle. 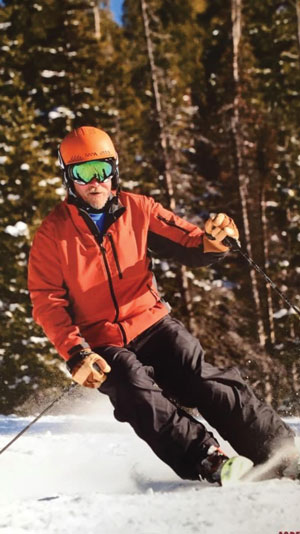 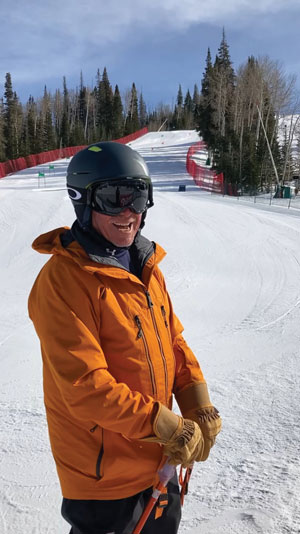 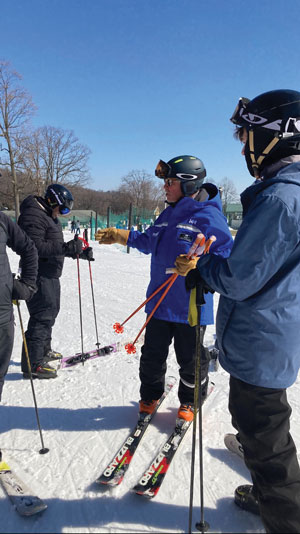 “If you surround yourself with people who exercise and watch their diet, they want to get out more, and life is more fun!” he says with conviction.

Consequently, Billmyer and his wife are active in the Lebanon Ski Club, where they meet likeminded people who also enjoy skiing, bicycling, and hiking. Currently, he serves as the club’s president.

He is eager to expand membership but notes: “People in ski clubs tend to be over 50. Younger people often don’t have time and money for a club as they build their careers and raise children.”

While Billmyer would enjoy attracting more members of all ages, he points out that skiing can be especially beneficial to older adults.

“You can be 70 like I am and ski. The sport really promotes getting in better shape,” he says.

Since he also teaches skiing part-time at Roundtop, he understands that to get comfortable with skiing, “you have to get outside of the comfort zone, be willing to try new things, and stop worrying about getting hurt.”

The best way to overcome the fear everyone initially feels is to take lessons.

“We promote learning from the ground up with a two-hour lesson,” he says. “It takes commitment. You may not be an expert after a lesson, but come out and learn, and you will become a skier forever.”

Billmyer does admit skiing is not an inexpensive sport, but there are ways to make it reasonable. For a two-hour group lesson, you can expect to pay about $100 locally, which can include helmet, poles, skis, and boots.

A day of local Pennsylvania skiing will cost about $60, but in places like the Rockies, daily ticket costs are considerably higher. However, a group rate with a ski club can offer substantial discounts for rooms, equipment, and lift tickets.

Billmyer also advises, “Rent equipment until you decide you like it. For example, most rental shops will allow you to test skis on the slopes. Then, if you decided to buy the skis, they’ll take off the rental cost.

“The first piece to buy, however, is good boots! Most people stop skiing if their feet hurt. So you may want to bring your own jacket and boots and rent the appropriate skis based on the condition of the slopes.”

When you’re finally speeding down a hill, you may find the costs are worth it.

“Rather than waiting for spring, skiing makes winter a whole lot more exciting,” Billmyer says. “You have things to look forward to.”

This season he and his wife have trips planned to Elk Mountain, Vermont, and then, later in the season, California and Colorado.

“Skiing is athletic — the more you ski, the better you get. I fall rarely — usually I’m just goofing around. I don’t have any fear,” he says.

Billmyer does understand that some people go down hills that are beyond their skill level, especially in the Rockies, where skiing can be more challenging.

“People do get stuck,” he says. “I am a people person and often help stuck skiers get down the slope. I’ve met people from all over the world.”

With a passion that reflects his love of the sport, Jack Billmyer inspires those of us for whom winter means dull weekends indoors, with too much TV and comfort food.

“Give skiing a try! It could change your life. You might stop complaining about winter and start saying how much fun it is.”