“If I do write my memoirs, they would sizzle,” says Jan Swarr, with a laugh that is never far away as the story of her life tumbles from her in jubilant waves.

With 82 years of joyous living, she has many stories to tell — all connected by a love of music and dance that runs through the rich tapestry of her life like a delicate golden thread.

Her journey began in her hometown of Mason City, Iowa, where Swarr explains music was in the air as Mason City is also the birthplace of Meredith Willson, the award-winning author of the 1957 Broadway musical The Music Man (later turned into the 1962 movie of the same name).

“I’m so glad I had a beautiful upbringing,” she says.

At college at St. Olaf’s — yes, the hometown of Betty White’s character in The Golden Girls — Swarr joined the renowned St. Olaf Choir, yet found time to compete in the Miss Minneapolis contest.

“I won the talent competition but got a zero in the swimsuit competition,” she adds with a chuckle.

From Burlesque Shows to Cruise Ships

That her voice was clearly her best asset came to the fore again when she sang in nightclubs and even burlesque clubs during her time in Boston, where she studied at the New England Conservatory of Music.

Swarr remembers, “I sang in clubs around Revere [a neighborhood in Boston] and was even asked to sing at burlesque clubs. This was the tail end of the burlesque period, where Gypsy Rose Lee was the star as part of an evening of entertainment — these were definitely not like the gentleman’s clubs of today.

“I was outraged when my manager asked me to perform at these venues, but he assured me, ‘A lady is a lady wherever you go.’ He was chewing me out, but that was the best advice I ever had.”

She found she enjoyed singing in the clubs, although “the girls in the show were making five times my salary — $500 per week, compared to my $125 per week — but I stuck with singing,” she notes with a smile.

Swarr was singing in a nightclub the day John Kennedy was shot on Nov. 22, 1963. Despite everyone’s shock, the performers followed the old show business motto and kept on performing.

“We learned to power through anything,” she says, explaining that the pace of club work could be grueling: “We worked two shows a night and three on Saturday.”

Swarr met her husband during her time at the Music Conservatory and found time to get married and raise a son.

She never stopped performing at clubs, hotels, theaters, and even cruise ships, but also held a variety of more traditional jobs. Whether she sold insurance or entertained visitors from all over the world as a guide for the “Ride the Ducks” water tour in Philadelphia, she brought her love of people and entertainment to the table.

Currently, she continues working as an insurance representative.

“I’ll never retire,” says Swarr, true to one of her favorite mottos: “Do what you love … you’ll never work a day in your life.”

Despite her career joys, Swarr faced dark periods in an abusive marriage that led her to join drug and alcohol addiction treatment programs.

“I’ll tell anyone about it, even my employers,” she says. “I am now over 40 years sober, with 35 years of no cigarettes. I want to live a life clean before God.

“Overcoming abuse and adversity forced me to make decisions one day at a time and accept life on life’s terms,” Swarr continues. “I live by the Serenity Prayer, my community, and my support groups. And it’s why I dance. Hard to stay mad when you’re trying to do a perfect time step.”

Now her goal is to give back to the community that supported her.

“I dedicate my life to encouraging others to take steps to overcome their own difficulties and to live without drugs and alcohol,” she says.

Swarr wrote a book of inspirational quotes she has passed on to her friends and acquaintances, especially women who face abuse and addiction. She is also a member of Kiwanis International, a nonprofit organization set up to support programs for children in the community.

“I wanted a tangible way to repay this community and love every second of it!” says Swarr.

In the mid-’60s, Swarr saw her father, a lifelong smoker, die of arteriosclerosis (hardening of the arteries). Her mother died of a brain tumor and heartbreak a few years later.

As a result, Swarr is especially committed to helping people stop smoking. She served as World Services Chair for a smoking cessation organization and hosted the organization’s World Conference in the Philadelphia region three times.

“Community service is in my DNA,” she says.

Swarr and her family moved to the Norristown area originally to be near her husband’s family. Although she divorced in 1970, she stayed in the area because of the tremendous community support she has received through the years.

Along with her work as Kiwanis Club volunteer, she was founder and chair of the Phoenixville Historic Candlelight Tour, a successful community showcase and fundraiser, until the program became another COVID casualty. This year, Swarr developed a community garden tour to fill in the gap.

As a result of her high-profile efforts, she has been recognized with numerous civic honors, from the 2009 Mayor’s Citizen Recognition Award and the Phoenixville Area Chamber of Commerce Award of Merit to serving as the 2012 Dogwood Parade Grand Marshal.

The Show Must Go On!

While she is immersed in community volunteering, music and performance continue to enliven her days.

At 73, she sang in the talent portion of the Ms. Pennsylvania Senior America competition. This year, Swarr sang and danced her way through a production of Guys and Dolls at the Forge Theater in Phoenixville through the month of June.

No slouch in keeping up with her fellow dancers even at 82, Swarr is quick to point out, “Our choreographer was president of the Rockettes Association.”

A showbiz trooper through and through, Swarr explains the show faced the difficult challenge of numerous members becoming ill with COVID.

“It was a setback, but the show must go on!” she says. “I’m so proud of how everyone powered through.”

With the show over, she has no intentions of slowing down.

“My next effort is to teach a community class in belly dance to help women love their bodies just as they are,” says Swarr.

At the end of the interview, Swarr tells one last story from her cruise ship days:

“Singers don’t reach true maturity in their voices until their ’50s and ’60s, when they’ve gone through life. When I was singing on cruise ships, our show’s magician said, ‘You have an unfinished symphony in your eyes.’ He was so right. I can now write the full score of my symphony.

“The life I have today is not the life I planned years ago, but I would not change it. As Barbra Streisand sang, ‘Good times and bum times, I’ve seen them all and, my dear, I’m still here!’ — thriving, happy, joyous, and free.”

On the cover: Swarr performing at the Latino Festival in Phoenixville. Photo credit: Jess Kassebaum 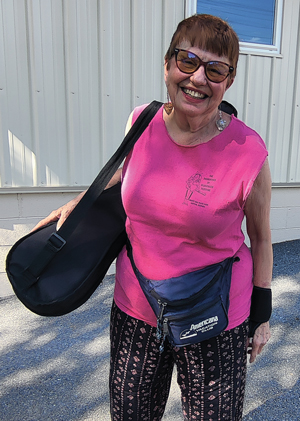 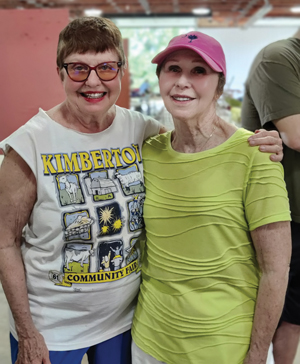 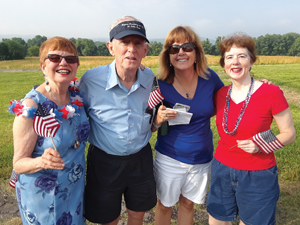 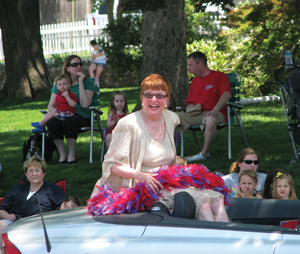