On a rainy night, when the wind is howling and the rest of us are safe and warm in our homes, Tracie A. Young, licensed wildlife rehabilitator, knows she’s going to have a busy night.

“In drastic weather when the wind is high, our phone rings like crazy,” she says. “Nests fall out of trees, bats are grounded and can’t fly. People call us to get baby birds back into their nests and bats back into colonies.”

Young has spent the last 12 years passionate about a career where saving an eagle with lead poisoning or raccoon with a hurt leg is part of her daily workday.

“It’s a job that requires seven days a week, 365 days a year,” says Young. “You can be sitting having Thanksgiving dinner, and someone calls with an injured animal that you’ll want to help. It’s a calling, not a job.”

Young’s journey to caring for wild animals began when she and her husband saw a snow goose that had been hit by a car.

“We drove home with me holding the bleeding goose with a broken wing on my lap,” says Young.

“It is illegal to have wild animals in your home, so we hid the goose in my in-laws’ garage, trying to find help for it. Like most people who see a hurt animal, I was so stressed. I didn’t know what to do, what to feed it. Finally, three days later, we drove one-and-a-half hours to get it to a wildlife rehab center.”

Holding the hurt goose touched a deep cord for Young. She wanted to find a way to help wild animals that were hurt.

Within a year, in 2010, Young was horrified by the devastation caused by the Deepwater Horizon Oil Spill in the Gulf of Mexico, the largest marine spill in history.

Large areas of the affected seabed became dead zones, and nearly a million birds suffocated or sickened from oil exposure, while contaminants from the spill were found in bird eggs as far north as Minnesota years later.

The massive devastation of the natural environment from the spill was a graphic example of a lesson Young would learn throughout her career.

“When wildlife intersects with humans, animals always lose,” she explains.

Desperate to help the suffering animals she saw on TV, Young signed up to volunteer but never got off the waiting list, since most volunteers were trained wildlife rehabilitators. At that point she was a graphic artist but was ready to change her career.

“I always knew I wanted to do something unique that makes a difference,” she says. “I found it taking care of animals.”

Bunnies and Chipmunks in the Closet

In Pennsylvania, the process of becoming a licensed wildlife rehabilitator is arduous and complicated. Currently, only 31 rehabilitators cover the whole state.

Young tells the story: “At this stage, I was required to take animals home to care for them. My husband and I were living in a townhouse. Raven Ridge Wildlife Center started in the closet. I had chipmunks and bunnies on heating disks. At lunch I would hurry home from my job to feed everybody.”

After successfully completing more exams and training, she received her one-year novice permit that finally led to a general permit.

After five years of training and certification through four separate agencies, Young set up Raven Ridge Wildlife Center at her home in Washington Boro. She works with two volunteers and her husband, Kurt, to care for about 30 animals each month.

“It can be more or less, depending on the time of year,” says Young.

She also works with several local vets who donate their time.

“We now specialize in raptors, like eagles, vultures, and hawks, and rabies-vector animals like raccoons, bats, groundhogs, and deer fox,” says Young. “If we don’t have room, we refer people to other centers.”

Wildlife rehab centers do not receive funding from state or federal agencies. Last year, Young relied on money from giving 30 community presentations, donations through Lancaster’s annual Extraordinary Give, and private donations to cover her annual budget of $150,000-$200,000.

“My husband has a day job,” Young adds with a smile. “We couldn’t do this otherwise.”

The Dangers of Lead Shot

The cost of bringing just one lead-poisoned eagle back to health can run into the thousands.

“We may use at least three to eight tests to determine levels of lead — 28 tests cost about $700,” Young explains. “Then we have to ship in frozen mice and rats, hand feed the animal, and conduct chelation therapy. Fortunately, a year ago we had a $3,000 donation so we could purchase an oxygen chamber.”

According to Young, “It is sad how many raptors are affected by lead poisoning and rodenticides. People put out poison traps, or hunters leave part of the deer in the field. Scavengers eat the rest and get lead poisoning — as can the hunter.

“We need to keep spreading the word to hunters and fishermen about the dangers to wildlife if you use lead shot and fishing equipment. Even ingesting just two BB pellets can kill an eagle.”

For Young, who has a special place in her heart for the power and beauty of raptors, the payoff comes when the bird is able to fly away after weeks of intensive care.

“It makes my heart stop when they fly back into the sky where they belong,” she says.

While a career in wildlife rehabilitation is rewarding, it can also be depressing. Sometimes, when the animal is too hurt, it requires euthanasia, a difficult part of Young’s job.

“It’s easy to burn out and become financially depleted,” she explains. “You need to find support to combat compassion fatigue.”

Young regularly attends workshops, classes, and an annual conference where she can talk shop with other wildlife rehabilitators and stay current in her field.

Swimming with the Sharks

When Young is ready to relax, it is not surprising that her dream vacation also involves animals.

“To dive with the great whites is my dream,” she says. “I love sharks — they’re so incredible, so smart.”

A master scuba diver, Young has SCUBA dived with several different species of shark. She will go to the Great Barrier Reef in Australia this October to dive with great white sharks and visit rehab centers for fruit bats, wallabies, and kangaroos.

Young is quick to defend sharks against their deadly reputation.

“We are not what they want,” she says. “We’re too bony! Sharks are looking for seals and fish.”

She enthusiastically describes a diving-trip highlight that would haunt most people’s nightmares.

To avoid antagonizing a group of agitated sharks, “We go to the ocean bottom, kneel, and cross our arms,” says Young. “A Caribbean reef shark swam toward me, and at the last second went right over my head. It was awesome.”

It is helpful to note that annual unprovoked shark attacks kill about five people globally, while in the U.S. alone, cows kill about 22 people yearly.

Young concludes with her hope to eventually buy a new, larger facility that allows her and her team to care for more wild animals.

“We tell people, if you find a hurt wild animal, don’t feed them or try to care for them yourself. Call us. Our quality of care is their quality of life.”

Tracie Young feels a compelling obligation to give the wild animals that are losing their habitat a second chance.

“Animals usually get hurt when they collide with humans. We owe it to them to provide an environment that keeps them wild for the next generation.”

Tracie and her staff are happy to come to your location with a presentation that includes “ambassador” animals that were not able to be returned to the wild. Check out her Facebook page at facebook.com/ravenridgewildlife or call Raven Ridge Wildlife Center at (717) 808-2652. 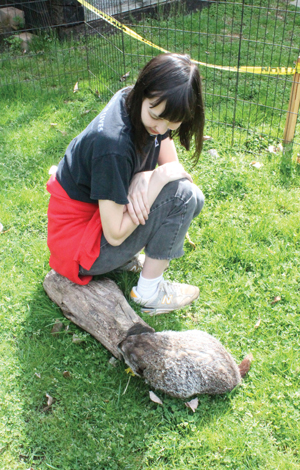 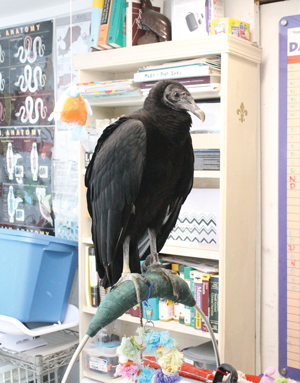 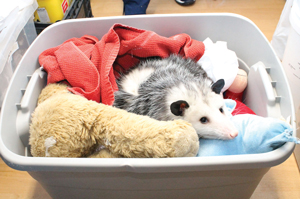 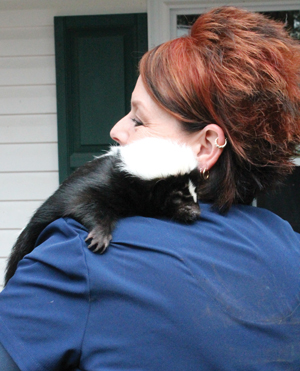