It was a sunny afternoon, with “Papa” pushing 5.5-year-old Aria on the swings, when she told her grandfather a fascinating tale of her toy Ducky’s surprise birthday party. André Renna had to listen hard to catch the story between each pass of the swing. 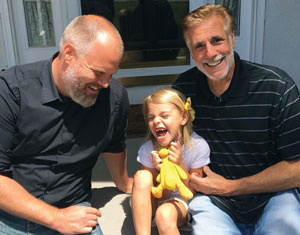 “I loved her story about Ducky, a small yellow toy duck she picked at an arcade in Ocean City,” he says. “When I mentioned to my wife, Patricia, what Aria had told me, she said, ‘You should turn that story into a children’s book.’ That led to Aria and I collaborating on our first children’s book.”

For Renna, producing The Adventures of Aria & Ducky: The Surprise Birthday Party was a year-long labor of love. Renna explains that his granddaughter had a very clear picture of Ducky’s friends and the details of the party. It was her vision that he and illustrator David Leonard brought to life.

Since it was Aria’s story, “I drove the artist crazy because I wanted the girl in the book to look like Aria,” says Renna. Finally, when the graphic artist captured the sparkle in Aria’s lively, dark eyes, the resemblance was complete.

Aria made sure Ducky’s friends — flamingo, penguin, unicorn, dinosaur, and turtle — all reflected her vision.

“We fixed T-Rex to make him bigger. David even redrew Jasmine (Aria’s cat who makes a guest appearance in the book) until the fur and color were accurate. Aria demanded we add more balloons in the book.

“And when Aria saw that the little girl wore flip-flops as she is sitting on the swing, she firmly told me, ‘Papa, I wear my pink sneakers when I’m at the playground.’”

In a clever technique, the characters look like stuffed toy animals when adults are around. In pictures with no adults, the toys are depicted as living characters whose animated expressions charm the reader.

Working on all aspects of developing a children’s book was a new challenge for André Renna for which his long, successful corporate career had not prepared him.

Born in Brooklyn, New York, Renna has lived for the last 40 years in the Lancaster area and held management positions in manufacturing at Hershey Foods and Victor F. Weaver (now part of Tyson Foods).

Prior to retiring, he was executive director of Regional Gastroenterology Associates of Lancaster and then Regional GI after RGAL merged with another practice.

A Link from the Old Days to the Present

By 2017, Renna was a highly regarded and well-known Lancaster County healthcare executive, yet he decided to retire to spend time with his grandchildren, Aria and Aiden.

“It was very important to me to spend time with my grandkids while they are young,” he says.

Renna and his wife watched their grandchildren two days a week, time that fostered a special bond between grandchildren and grandparents.

Renna says both the child and grandparent are greatly enriched by spending time together and developing a close relationship.

“Grandparents can play a unique and vital role in their grandchildren’s lives. They provide continuity, linking the past to the present. We can tell stories of our heritage and culture, anecdotes about members of our family, and pass along traditions.

“We can also have ‘teaching moments’ that support the values and goals that the parents are instilling in the children. I think it is extremely difficult to be a parent in this day and age. Grandparents can be a resource and an asset in so many ways.”

By spending time with Aria, Renna had the special joy of recapturing the innocent pleasures of his own childhood in Bensonhurst, Brooklyn, a very Italian-American neighborhood.

“I had the greatest childhood. All my relatives were within walking distance,” he explains. “We’d sit on the ‘stoop’ and talk and often spend time at each other’s homes.

“I visited my grandparents many times in a week. My grandmother would tell me stories of her home in Italy, coming to America, the hard times the family faced, and the traditions that we followed. Of course, these talks always involved some sort of Italian food! Great memories.”

A Labor of Love

Renna strove to write a book that reflects the creativity and exuberance of childhood. The result is an imaginative, beautifully illustrated story that is highly engaging for children and offers a moral for parents who want their child’s books to include a deeper meaning.

Spoiler alert — Jasmine the cat ends up ripping up the presents and decorations and knocks over the food, ruining the party.

But the moral is clear: Birthdays are about friendship, not just getting stuff. Ducky is thrilled that his friends planned a special day for him despite Jasmine’s rampage.

Surveying the mess, Ducky declares, “Don’t be sad, Aria; this is the best birthday ever!”

As a self-published author, Renna’s task is enormous since he is also in charge of marketing the book. Aria loves helping out when her grandfather presents the book and does readings. A highlight for both was a special reading at Aria’s elementary school. Aria sat up front while her principal read the book to the class.

Through Renna’s efforts, The Surprise Birthday Party (ariaandducky.com) is available at Barnes & Noble and Bellaboo, a local Lancaster children’s store, or through Amazon.com.

“There is so much more to publishing a children’s book than simply writing the text. It is a strain on your time and resources. Unless you write the next Harry Potter or Dr. Seuss series, it will be a long, arduous, and at times frustrating road,” Renna says.

“But for me, the real ‘profit’ is the joy of spending time with my granddaughter, laughing, sharing creative ideas, and making memories.”

Although Renna’s post-retirement days are filled with consulting, teaching, and volunteer work as a small-business mentor with SCORE, Renna is already planning his second book with Aria. This one will include her little brother, Aiden, who is now 4 years old.

“It’s definitely not over — there’ll be more Aria and Ducky adventures. Aria is now 7 years old and in first grade. It will be interesting to see what the next adventure will be for Aria and Ducky.

“I knew I’d love being a grandparent, but I didn’t know how amazing it would be. Grandkids keep you young and vital,” he concludes. “I feel honored and blessed to be around my grandchildren. I never take that for granted. I know that I’m a lucky guy. Writing books gives me the opportunity to stay connected to their world.”