In 1957, Elvis had a hit record with “All Shook Up”; the Russians launched Sputnik I, the first space satellite; and Lion Bowl, a 12-lane center, was built on the corner of Pine and Martin streets in Red Lion, Pennsylvania.

The bowling boom was in its infancy. From 1955 through 1963, the number of bowling centers nearly doubled nationally, and league bowlers increased from 3 million to 7 million, according to the United States Bowling Congress.

Like so many bowling-crazy Americans, Preston (Pret) Grove’s father, Curt, joined a league in 1957. He bowled for the Red Lion Zion Church team at Lion Bowl.

Pret, 15, accompanied his dad to the center every week. Before long, Pret was asked to substitute. And, soon he became a regular team member.

“Bowling in a league was one of the most exciting things for me growing up,” he recalled. “There wasn’t much for a farm boy to do, particularly in the wintertime, in a small town of 5,500 or so.”

After all these years, it’s not much of a stretch to say bowling is in his DNA. It’s part of his weekly biorhythm. He feels out of sorts if he misses a Thursday night because of snow or a COVID-19 shutdown.

“I’ve never missed a season,” said Grove, who bowls on a team with his grandson, Tim Johnson; Tim’s girlfriend, Stephanie Newton; and his son-in-law, Don Emenheiser. The foursome spends a lot of time kidding each other, catching up on family news, and practicing one-upsmanship.

“I still look forward to bowling at Lion Bowl every week with my family and seeing all my friends,” he said. “With everyone so busy these days, it’s great to be able to spend time with my family once a week. At this point, they are the main reason why I keep bowling.”

He added: “You make plenty of friends through bowling, and the camaraderie is special. Bowling is a lot more fun than most people realize.”

Dave Zelger, co-proprietor of Lion Bowl, said, “Pret is extremely well liked. I think he knows everyone, and everyone knows him.”

Grove said it’s difficult to imagine the bowling frenzy that swept the country in the 1950s and 1960s if you never experienced it.

Bowling centers were filled with two shifts of leagues every weeknight, and weekends were packed. Every center had a waiting list that was sometimes a couple of hours long. Grove said his father had standing reservations at Lion Bowl every Saturday night.

Grove followed the exploits of PBA bowlers Don Carter and Dick Weber and, later on, the likes of Mark Roth and Earl Anthony. He was one of 14 million to 15 million viewers who faithfully tuned in to watch PBA bowlers compete every Saturday afternoon on ABC-TV.

“The PBA bowlers were our heroes,” he said. “I learned how to be a much better bowler by watching them.”

Grove’s grandfatherly appearance belies his prowess on the lanes. Last year, he averaged 184, which is exceptionally high for a septuagenarian. His most memorable bowling moments include rolling his first 300 game and first 700 series. He said his weekly scores have become less important as he has gotten older.

“Pret’s a very good bowler,” said Dave Zelger. “He’s fundamentally sound with a smooth delivery. He’s an intelligent bowler. He knows how to adjust to the changing lane conditions. Pret played several sports when he was younger, and his athleticism is still evident.”

In his younger days, Grove competed in four or five leagues a week. Still, he couldn’t get enough competition. He and his friends used to travel throughout the region competing in tournaments.

Clase Heaps, proprietor of Lion Bowl, organized the trips. Heaps, who also taught at Red Lion, was one of the best bowlers and bowling instructors in the county. He believed competing in tournaments was one of the best ways league bowlers could improve their games.

“Many times, 10 or 12 of us would pile into cars and head to a tournament somewhere in the region,” said Grove. “Competing in tournaments was a big deal.”

He said Red Lion individuals and teams would often reenter a tournament several times, spending nearly all day at the host center.

“That’s a lot of money when you’re making $1.25 an hour,” stressed Grove, who retired from AMP as a die cast designer. Some years, he won more money bowling than he earned at his regular job.

What advice would Grove give to other seniors?

“Senior leagues are very popular right now. It’s a great way to be active, be social, and have a good time. Bowling is good for your health. I certainly would recommend seniors give bowling a try.  I think many of them would be surprised.”

After more than six decades, Grove is still enthusiastic about bowling. And he doesn’t plan to hang up his bowling shoes any time soon.

“I’m just going to keep showing up as long as I can,” he said.

Barry Sparks is the author of EARL: The Greatest Bowler of All Time. 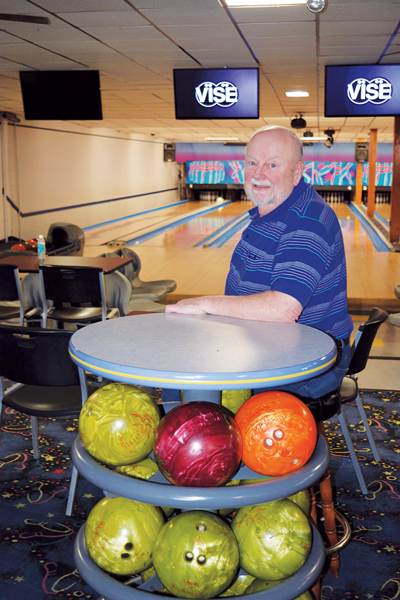 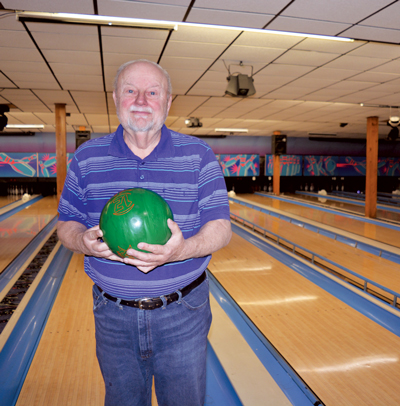