COVER STORY: Grateful for the Ride

Nannette Swanson explains that volunteering with Recycle Bicycle Harrisburg has been the perfect solution to the quarantine restrictions.

“I can’t sit in this house. I have to be doing something for the community,” she says.

So instead of sitting on her couch, munching snacks, and bingeing on TV like so many of us, Swanson, 75, learned how to change tires, fix brakes and chains, scrape rust, and spray paint donated bicycles.

Her interest in the bike shop started when she was looking for something to engage her 14-year-old grandson. They stopped at the neighborhood bike shop. After a brief conversation, Dan Ellenberger, who works at the shop, asked her if she wanted to volunteer.

It didn’t take her long to agree.

“I have four kids and always put their bikes together. My husband didn’t do it. I was sort of adventurous,” says Swanson.

Now she volunteers at the nonprofit bike shop three days a week.

“There are a lot of people who can’t afford new bicycles,” she says. “Kids from the neighborhood come in, and we give them the parts, then help them fix their own bicycles. Others get reconditioned bikes to ride.”

She explains the bikes give local children a wholesome activity, while adults also enjoy getting bicycles to ride for sport and pleasure. Many belong to a local bike club that rides on the Capital Greenbelt, a scenic way to get around the whole city.

Swanson is always on the lookout for family, friends, and neighbors.

“I even found two trike bikes (three-wheeled bicycles) and gave them to friends. Working here has kept me inspired.”

Her enthusiasm for the shop has rubbed off on her family. Swanson notes that her grandson, a granddaughter in college, and her daughter are all avid bike riders.

Bringing the Whole Community Together

Swanson explains that riding a bicycle is a great way to see Harrisburg, and the shop brings the whole community together.

Shop partners include the city of Harrisburg and Mayor Eric Papenfuse and the Harrisburg Bureau of Police, along with local companies, educational institutions, and religious, community-advocacy, and social-assistance organizations, as well as other bicycle shops.

Recycle Bicycle Harrisburg was started in 2000 by Ross Willard, who noticed that most of the bikes that the kids in the neighborhood were riding did not have working brakes. He started to repair bicycles on Harrisburg street corners, at block parties, and at multicultural festivals.

As word spread and demand grew, Willard recruited volunteers to help repair the bikes from his garage and basement.

Eventually, the organization grew too large and moved into a large, empty basement; later, they rented rundown warehouse space. Before the pandemic, the nonprofit was finally able to buy a permanent home for Recycle Bicycle Harrisburg, an older, 9,000-square-foot warehouse at 1722 Chestnut St. in Harrisburg, with enough space to grow. 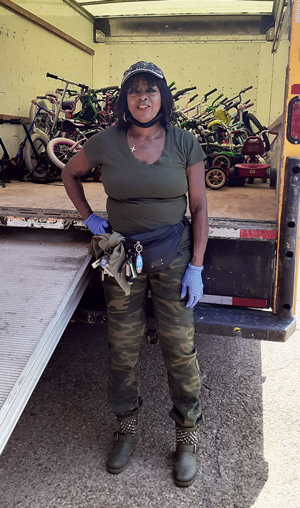 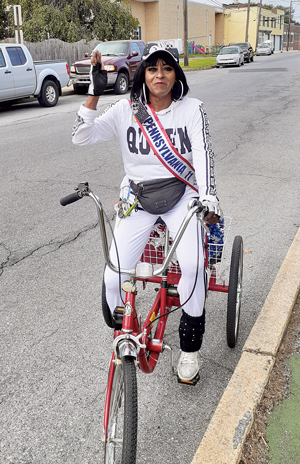 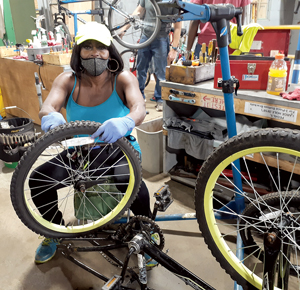 An all-volunteer crew rehabbed the whole space, including the entire electrical system, plumbing for ADA bathrooms, and framing. The work continued during the 2020 shutdown, since bicycle shops in Pennsylvania were declared essential businesses.

Volunteers like Swanson are continuing to build community spirit by recycling both used and new bicycles back into the community. The nonprofit accepts bikes in any condition, donated parts, and volunteer service hours.

For Swanson, volunteering at the bike shop is just the latest stop on her lifelong mission of lending a helping hand. Swanson started reaching out to her neighbors, even as a child.

She remembers leaving groceries on the doorstep for needy neighbors: “We were living in the projects. There’s always a need.”

Her motivation has always been her strong Christian faith. She calls herself “God inspired” and explains, “I’m just following his footsteps, guiding me to do this stuff.”

Swanson worked full time for the state in the tax credit division, doing clerical work at the Labor & Industry Building while she raised her four children. Even as a busy divorced, single mother of four, she continued her work in the community, often through her church home, the New Hope Living Baptist Church.

Most recently, Swanson helped to organize food bank donations to families and breakfast and lunch meal bags for children who were not able to get meals at their schools during the pandemic lockdown.

She also helped with Toys for Tots and continues to volunteer on the Roar Team at Penn State Health, providing transportation to doctor appointments.

Since Swanson has always enjoyed working with children, she volunteered for 10 years at Melrose Elementary School. For two and a half years, she worked as a therapeutic staff supporter for a youth advocate program for children with behavioral issues who were in the legal system.

“We learned how to calm them down and keep them on track,” she explains.

With so many volunteer interests, Swanson confesses, “My kids always ask, ‘Mom, what are you going to do now?’ I like to keep ’em guessing!”

Everything but the Swimsuit Competition

Music has also played a central role in Swanson’s life. As a performer, she sings both gospel and contemporary music. In 2006, she joined the PA State Senior Idol competition and performed with other contestants at the Dutch Apple Dinner Theater in Lancaster.

In 2011 she decided to compete for Ms. PA Senior America in York.

“We did interviews, talent performances, ball gown competitions, and discussed our philosophy of life — in other words, everything but the swimsuit competition!” she says with a smile.

Her prayer song helped her to win the competition and continue on to the national competition in Atlantic City, where she won second runner up.

“I’m still involved with the group. We perform in the community and at senior centers — wherever they’ll have us,” Swanson explains.

When the Capital Dinner Theater was still open, she also performed in popular shows like The Wiz. One of her favorite memories from those days was meeting Sherman Hemsley, known for his role as George Jefferson on the sitcom The Jeffersons.

Currently, she combines her love of music and volunteering by performing in senior centers and nursing homes with the Sentimentalists, a group of singers from around the state whose director, Merle Millhimes, is a 92-year-old powerhouse.

“I know a lot of amazing women of all ages,” says Swanson.

Her lifelong love of music and performance began early in childhood when Swanson and her family sang at church, at school, and on neighborhood street corners.

“At one point, I wanted to be a blues singer,” she remembers.

Instead, her performance interests took another direction when, at age 15, she joined the Scott White Family evangelistic crusade. She continued her interest in Christian outreach when she earned her bachelor’s degree in religious education at the New Jersey Bible Institute.

Since then, Swanson has led a joyous life of service and exemplifies her personal philosophy she has developed over the years.

“Be your best person, have empathy, don’t be so hard on people, and don’t judge — you don’t know what they are going through,” she explains. “Everything goes away except what you do for God.”

Most recently, Swanson participated in a community performance with drummers, dancers, poets, and singers celebrating Black History Month. She sang songs from enslaved people and discussed their legacy.

Playing with her 11 grandchildren is an ongoing joy. And while she sold her Kawasaki 250 motorcycle after two falls, she still owns a scooter that requires some work. Her friends at the bike shop are happy to help.

Swanson is grateful for every opportunity to serve and doesn’t look for accolades.

“I’ve been around a long time,” she says. “God keeps me healthy and in my right mind. My reward is in heaven.”