COVER STORY: Giving Back to Golf

In retirement, some people enjoy collecting items, such as stamps or coins. Some enjoy activities, like running or bowling. And, still others enjoy philanthropic pursuits, such as volunteering at soup kitchens or collecting supplies to send to military personnel overseas.

Len Vadas, 79, is fortunate enough to enjoy all three. His passion for golf has led to the unique hobby of collecting golf clubs, many of which he has donated to charitable groups to help offset the significant expense of golf equipment.

Entering Vadas’ York County basement, it’s difficult to take in the scale of his collection. Nearly every available foot of floorspace is occupied by golf bags loaded with clubs or stacks of clubs separated by type: putters here, wedges there, drivers along the wall.

Vadas estimates that he has nearly 2,000 clubs at his house and has donated or sold over a thousand others.

“I started collecting putters, then wedges and putters, then old, wooden-shafted ones … I picked them up whenever I traveled,” recalled Vadas.

“I just started enjoying it, and then I decided that this was going to be my hobby,” he said with a laugh. “It really took off, and I’ve been doing it for years.”

Vadas was inspired to give back to the sport he loves through his admiration for famed golfer and fellow Pennsylvanian Arnold Palmer.

“I’m from Latrobe, and he’s from Latrobe. I didn’t find out until later that he and I are related; he’s my cousin,” Vadas said.

Vadas is an accomplished golfer, having played in multiple tournaments and scoring three holes in one over his 50 years of playing.

“I always wanted to play golf when I was a kid, but we were poor, and my dad said I couldn’t play, it’s too expensive … So, when I got out of the service, I said, ‘I want to learn to play golf.’”

He’s been playing ever since.

Working as an engineer, Vadas did a lot of traveling and would stop at area yard sales, thrift shops, and antique shops, picking up clubs.

“My goal was, whenever I retired, I wanted to be able to donate clubs to different organizations,” he said.

In 2015, Vadas was asked to provide clubs for a Penn State University affiliate in Croatia. The University of Zagreb, a global exchange network partner with Penn State, wanted to start a golf program but only had three sets of clubs.

Vadas responded that he could get the clubs, but how would he send them to Croatia? Swalgin’s wife took care of shipping them.

About a month later, Vadas received a thank-you package from the University of Zagreb’s director.

“He sent me a real nice letter and a jacket and shirt from Croatia … So that was really nice of them,” recalled Vadas. 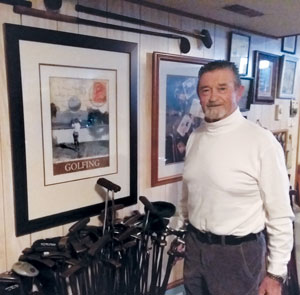 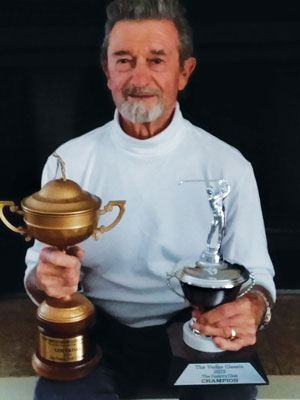 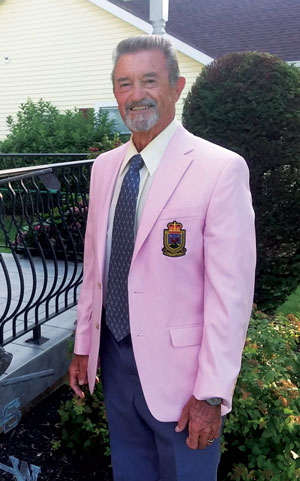 Currently, Vadas is parting with some of the used clubs in his collection by selling them online with the help of a Penn State York student. But with his eye ever toward philanthropy, Vadas gives the student 50% of the sale price to use toward funding his education.

By his estimate, Vadas has donated thousands of clubs to Penn State York since 2011, including a donation of 200 more in early 2020.

“Some of their clubs were missing, and some of the clubs were broken, so they contacted me,” stated Vadas. “I said sure, I’d be happy to donate some clubs.”

Vadas’ efforts have not gone unnoticed. Two years ago, he took first place in his cousin’s tournament, the Vadas Classic in Cleveland, Ohio. Vadas received a trophy and pink jacket for winning but was then blindsided with a humanitarian achievement award trophy for his charitable donations to the sport.

“It was a surprise; they did it behind my back and got all the information from my wife,” he said with a chuckle.

Surprises are a large part of the appeal of this hobby.

“It’s exciting to go to these thrift shops and buy stuff, and then you come back home and you find out they’re valuable,” Vadas said. “That’s part of the fun.”

Vadas once bought six clubs for $120 and discovered that one of them was a George Low Jr. club worth $1,200.

There have also been missed opportunities. Once, in Martha’s Vineyard, he passed up an adjustable wooden-shafted club because he didn’t have enough cash on him.

When asked if he had a favorite, Vadas pulled out a rare Wilson-brand putter designed by Arnold Palmer. Unfortunately, Vadas had a second one but inadvertently sold it in a set of clubs.

Other favorites are a commemorative collection of Arnold Palmer clubs and an autographed picture that Palmer gave Vadas for his 65th birthday. Palmer also autographed hats and jackets for him when Vadas attended a Masters Tournament.

Vadas also pointed out the sentimental value of his framed hat signed in 1999 by golfer Payne Stewart, who died in a plane crash later that year. Additionally, he values his collection of golf balls from all the courses he has played during his travels.

Vadas still enjoys getting out on the golf course but is now more concerned with having fun than keeping score. Golf has provided him with a lifetime of gratification.

“I just enjoy helping people out, and I want to give back to golf,” Vadas said. “Golf’s been good to me.”