Joanne Walcerz has joyfully embraced each change in a life journey full of twists and turns — with enough nail-biting adventures for a Hollywood thriller. Her life of growth and transformation is certainly a model for a time of crisis that demands new norms and painful lifestyle changes.

Walcerz’s current career as a therapeutic massage therapist could have easily collapsed during a year when pandemic restrictions have shuttered so many small businesses.

Instead, she explains, “I’ve had to revamp my business model and pull the plug on the office.”

Now she goes to people’s homes to give massages, having invested in a portable table and equipment. Walcerz’s lifelong adaptability to unexpected change has enabled her business to not only survive, but also to prosper during COVID-19.

Walcerz never considered a career as massage therapist growing up on Long Island, New York. She spoke Polish at home and learned to appreciate her heritage from her grandmother, who lived with the family.

“She instilled in me an interest in all things ethnic,” says Walcerz.

She chose to be a theater major in college, but soon switched to Russian, hoping to study in the USSR as an exchange student. Ironically, instead Walcerz ended up studying in Poland during Solidarity, the country’s nonviolent struggle against the authoritarian communist government.

Says Walcerz, “In the early 1980s, participating in the Solidarity movement was dangerous. If the government found out you were spreading information about the union and protests, they would haul you off to jail or to Siberia, and no one heard from you again.”

Despite the ever-present danger of imprisonment and “disappearance,” as an idealistic young student, Walcerz was soon immersed in the movement and volunteered to be a runner for a protest publication, taking separate pages of the publication to secret drop-off points.

“You had to be extremely careful you weren’t followed. There was so much subterfuge in the process,” she explains.

It was more of a risk than she realized: The local authorities opened Walcerz’s mail, listened to phone conversations, and followed her everywhere. She continued her work for Solidarity, however, until the day she noticed a massive prayer vigil on her way home.

“I got off the tram to watch the vigil for a priest who had spoken out against the government and had been kidnapped, tortured, and killed. All of a sudden a voice brutally whispered in my ear, ‘You better leave right now.’ I got nervous and left.”

Within five minutes, police in riot gear broke up the vigil with tear gas and arrested everyone. Clearly the local authorities did not want the additional complication of arresting an American student. 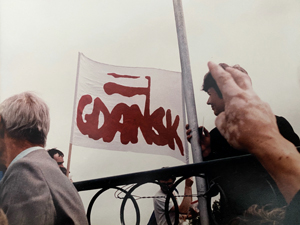 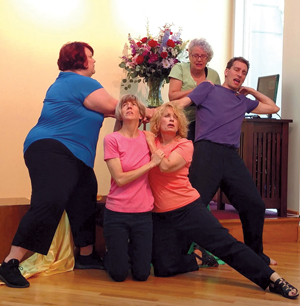 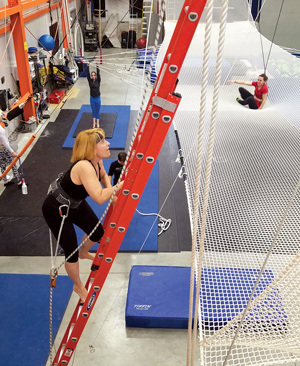 Now married, Walcerz and her husband moved to Washington, D.C., for his job with IBM. They had met in a Russian immersion class and had to conduct the whole courtship in faulty Russian.

Initially, she worked with the Polish American Association to funnel money to Polish emigres, but she eventually went on to work at the Marriott, three blocks from the White House.

“In my three years as concierge, I had a million adventures, meeting lots of performers from the Kennedy Center,” says Walcerz.

A favorite recollection is being at the beck and call of David Ogden Stiers, “Major Winchester” from the hit series M.A.S.H.

“He thought he was Tom Cruise and walked around with his hat down because he thought everyone would recognize him,” she remembers.

Two other favorite visitors to the hotel were internationally acclaimed jazz musicians Wynton and Brandon Marsalis.

“I gushed over them and asked Wynton to autograph my album. He wrote a lovely note — I still have it.”

But even as concierge, Walcerz had another heart-stopping adventure. During the Reagan administration, the president often used the Marriott for political banquets.

“I wanted to take my parents on a brief tour of the presidential suite,” she explains. “We were on the balcony when my parents and I heard these clicks.”

She was unaware that the hotel was being locked down before the president’s arrival. Three strange people in the presidential suite were perceived as a threat.

“The sharpshooters had us in their scopes, and the clicks we heard were their guns in readiness. The Secret Service told us to get off the balcony — immediately!”

After D.C., the family moved to Austin, Texas, for three years, before crossing the Atlantic to Cambridge, England, where Walcerz volunteered at a refugee center for women.

She remembers, “I ran a therapeutic a cappella singing class. The women brought in music from all over the world and sang just for the joy of it.”


Touch is What Connects Us

The next move brought the family to Massachusetts, where she settled into a 25-year career teaching and counseling at women’s health centers. When her husband accepted a position at York College, the family moved to York, Pennsylvania.

While Walcerz resumed her teaching and counseling career, her marriage had ended. She was now a single mother with two children living in a small, downtown-York apartment on a drag-racing route.

At age 47, Walcerz had an epiphany.

“After all of those years talking and listening to people, I now wanted to focus on touch, laying hands on people to help them to heal.”

After completing an extensive program in therapeutic massage, she found work at a drug and alcohol rehab center.

“When you’re addicted, your body is completely out of whack. Massage resets the digestive track and impacts the efficacy of the medications,” says Walcerz. “Addicted people are also often very isolated. Even their children and spouses stop touching them. I would help them to connect to their bodies through touch.”

Eventually, Walcerz would develop her own massage practice that has thrived for the last 15 years. She also volunteers to provide free massage services to adult survivors of sexual abuse at a local counseling center as a way to give back to the community.

“I feel honored that they trust me,” she says.

Especially pertinent during this year of social distancing, Walcerz sees a spiritual dimension to her work: “Touch is what connects us. I want my clients to feel they are valued and loved — I feel it back and am so privileged to be part of their healing journey.”

In the last seven years, Walcerz has combined her early interest in the theater and healing as a member of a local improv group, River Crossing Playback Theater (rivercrossingplayback.org).

Playback theater is an international movement, with more than 70 companies in the United States alone. Walcerz explains that a “conductor” elicits stories from the audience. The story is then “played back” through four actors who improvise both dialogue and physical movement to capture the emotional intent of the story.

“It’s powerful — you see your story come to life with dialogue that is intuited. The goal is to achieve catharsis and a deeper understanding that engenders empathy,” says Walcerz.

“We’ve done programs on racism and conflict resolution, as well as joyous events. People sometimes express themselves for the first time about a certain issue and come away healed.”


What are the common threads in a life that is an ever-changing tapestry? Walcerz’s life is defined by a fearlessness that has allowed her to experience so many life changes with joy and grace.

“For my 60th birthday, my daughter bought me a trapeze class. I was absolutely terrified, but I had to show her I was still fearless and flew on the trapeze for a full afternoon,” Walcerz explains.

She also believes her upbringing provided a solid foundation for every step in her life path.

“My folks raised me to be empathetic and compassionate and to believe in the inherent worth and dignity of every human being — with a strong commitment to service to others.”

And she has learned to accept that life is change, especially during a pandemic. Walcerz had planned a wedding with her “sweetheart” of 15 years, Cliff, an emergency room physician, for June 2020.

With the virus, those plans were canceled. Walcerz just laughs at yet another unexpected bend in the road.

“Whatever we eventually do, we’ll have fun,” she says.

Looking back at all of her adventures, and those of the many women she has met, Walcerz concludes, “You have to admit, women over 50 are living some kickass lives.”