COVER STORY: All the Colors of the Earth beneath Our Feet

R.J. Harris’s Reading backyard wasn’t just a place to play ball or cut the grass on Saturdays. It was a potential treasure trove.

“I wanted to be a geologist until age 12 and was always digging up the backyard. My mother would find me digging for dinosaur bones. Another time, I built an oil derrick out of two-by-fours.”

Harris’s father had died when he was a child, and his mother had to work during the day. That left him alone at home and “adventurous.”

Everywhere he went, young Harris found interesting and unique rocks and minerals. By age 8 or 9, he saved his pennies to go to the Reading Museum’s gift shop to buy his favorites, rose quartz and iron pyrite, also known as fool’s gold.

Then his early career plans took a surprise turn.

“I woke up one day at age 12 and heard the guy on the radio having fun and decided from that day on, that’s what I wanted to do,” says Harris, who now does a morning news and talk show from 5-9 a.m. on WHP580, simulcast on WRAW (the station that first introduced him to radio).

As a young adult, Harris focused on his career, with less focus on his rock and fossil collecting. However, as soon as his children, daughter Christi and sons Michael and Eric, were old enough, he took them rock hunting wherever they were living, and his passion for collecting rekindled.

“All of my children have some of my passion for geology. I think that my daughter, Christi, probably got more of the bug than the other two, but they all liked it,” says Harris. “When they were in grade school and studied geology, they always had great things to show.”

Now his seven grandchildren and two step-grandchildren each have their own rock collections they started as young children.

Harris’s radio career took him all over the United States and gave him many opportunities to build up his rock and mineral collections.

“I used to call myself a migrant disc jockey because we moved like military people.”

Eventually, Harris and his wife, Bonnie, wanted their children to be close to family again and decided to settle permanently in Pennsylvania.

Once he was settled, Harris became even more committed to his rock and mineral collection hobby. He became a Cub Scout master and took the kids to find fossils, in particular up in Perry County. 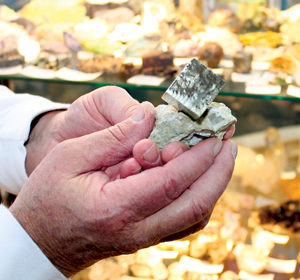 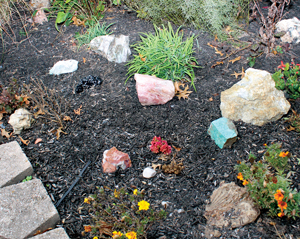 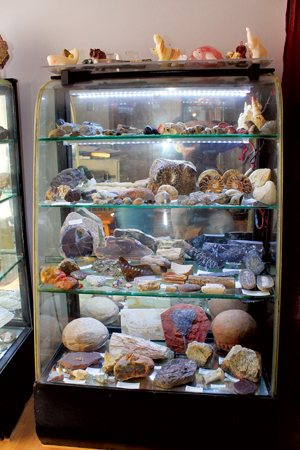 In the early ’90s, he joined Central Pennsylvania Rock and Mineral Club.

“I went on my first quarry trip to Snyder County, found all kinds of beautiful crystals, and I was hooked.”

Within three years, Harris became president of the club. He is now vice president after having served five terms as the club’s president.

Harris has also served as past president of the Eastern Federation of Mineralogical and Lapidary Societies, which oversees all of the rock clubs and jewelry makers east of the Mississippi. They also offer insurance for digs.

By joining a club, members are able to dig in quarries and collecting venues that would be closed to the average person. Clubs also provide members with safety training and insurance.

“A rock less than the size of baseball falling from up above literally could kill you,” says Harris. “We wear hard hats, safety glasses, and steel-toed shoes; we take it pretty seriously.”

On a typical dig that Harris leads, each member signs paperwork at arrival and undergoes the quarry’s specific safety training.

“What is really neat about rock collecting is you learn from the people you’re with,” Harris says. “Typically there are some older folks who have been in the club forever and have been on all kinds of digs. They can teach you everything, from how to carry your tools to how to bring back your treasures in ingenious carts and buckets. And you learn the geology.”

When Pennsylvania was Beachfront Property

While quarries and mines require permission for groups to come in and dig, the amateur geologist can easily find a fossil site to explore.

“Fossils are everywhere, from Lancaster to Dauphin and York counties, but are especially plentiful in Perry County,” says Harris.

He suggests an internet search to identify a few sites accessible to families.

“Usually fossils are so abundant that everyone will find some, especially a trilobite (the state fossil) and seashells.”

Harris explains that before the continents divided, there was one land mass called Pangea.

“You’ll see that Pennsylvania was pretty much on the equator. If you can imagine, we were once lush seas and tropical lands. That’s why we have all these sea creatures fossilized,” Harris says. “If you live in Cumberland County and stand on shale, that was beachfront property.

What is now Perry County was called the Devonian sea.

“We also have lots of limestone, formed from the remnants of sea creatures that have built up over all those years.”

Harris has collected several thousand specimens, from quartz and calcite, to the very rare wulfenite, mimetite, and delicate Desert Rose selenite. The collection encompasses a wide range of minerals with numerous classifications “that will probably have people’s eyes glaze over,” laughs Harris.

How to display his many treasures?

“My inspiration was the Carnegie Museum. I went there for the annual gem show and saw an incredible collection of Pennsylvania minerals in beautiful cases all lit up with halogen lights. That’s when I realized lights are the most important thing,” says Harris. “I buy display cases or curios from people and have turned them into rock cases.”

Lest the family home become a museum as well, Harris’s wife, Bonnie, has suggested a limit of two cases of the most beautiful specimens to be displayed in the family room.

No worries: Harris has found a home for the other 10 cases.

“I have a ‘man’ room that has quite a few cases, and then there’s the basement,” he says. “At least 50 nice, large specimens are in the yard.”

Harris’s love of rocks and minerals is most apparent when he is asked to list his favorites.

They include, “huge, beautiful quartz crystals from Arkansas; amethyst crystals from Georgia that are perfectly purple and gorgeous; an apple green mineral from Snyder County called wavelite with little bubbles like little half-spheres, just absolutely beautiful; and perfect pyrite cubes from Glendon, North Carolina, that are bigger than softballs.”

Despite the size of his collection, his quest for geological marvels is not over. He continues his digs and often attends mining camps from Poland, Maine, to Wildacres, North Carolina, as vacation spots.

For the interested public who would like to stay local, Harris’s Central Pennsylvania Rock and Mineral Club (rockandmineral.org) has an annual show with dealers and educational displays as well as events for children.

“Literally thousands of minerals exist under our feet, and we have no idea they are there. A museum or a collection like mine lets you see all the colors of the earth beneath our feet,” Harris concludes. “How the earth was formed is really is a pretty amazing story. I call it God’s artwork.”