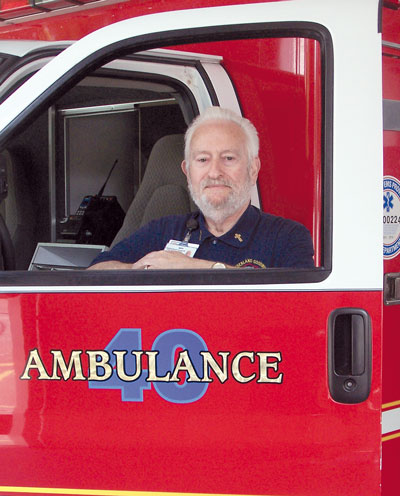 Frank Poley is there for families, patients, and EMS staff whenever tragedy strikes.

“When suddenly someone loses a husband, wife, or even a child, I’m there for them. I feel for them. I stay on the scene until a coroner comes, and I stay with the family as long as they want,” the volunteer chaplain said.

Poley, an ordained chaplain with the Penn Del district of the Assemblies of God, doesn’t have any special training in chaplaincy.

“What prepared me is my deep faith in the Lord above. All I do is open my mouth, and God takes care of it. The right words come out,” he said. “One thing God has given me is an overdose of compassion.”

Losing children is the hardest. The youngest one was only 5 days old when there was a home accident in which a parent fell asleep and accidentally smothered the child.

He also helped the family of a 1-month-old, where it was later determined the baby died of shaken-baby syndrome caused by the father.

“The EMTs were crying their eyes out. They could be anywhere else, but they chose to be first responders,” Poley said. “The doctor gave me the sign the baby was dead, and I had to tell the dad. I also had to reach out to the mom, who was incarcerated. The warden allowed her to come to the hospital with two guards.

He also prayed over the infant and was asked to tell the 6-year-old daughter. When he told her he was a chaplain, she said she knew him because he had prayed over her previously when she was sick. She asked him how her sister was.

“I said, ‘Jesus came and took your sister, but you’ll have a chance to see her again.’”

Poley recalled another incident when he was called during off-duty hours.

“The husband died at the kitchen table while the wife was there. I just held her and reached out to her pastor. I wanted her to be as comfortable as possible. She got one of my hankies — my pants are loaded with pockets, and I always have a few hankies since I go through them.

“Two or three weeks later, a box arrived with a note which said, ‘You were there when I needed you. Enclosed find all my dead husband’s hankies. I’m sure you’ll put them to good use.’”

The EMS chaplaincy program began in 2008 after a local pastor told EMS Chief Bobby Pine about his brainstorm following a bad accident in the area.

“He thought there should be an outlet for providers to have counseling, someone to talk to, after a bad call,” Pine said.

There were chaplaincy programs for police departments, but none for EMS since they are “two different animals,” he said.

At first, the program took heat from EMS personnel because they didn’t think chaplains belonged in the ambulances, and there was a fear of the chaplains being overtly religious and pushy.

But after a few months, the fears were gone.

The EMS chaplains are all trained in CPR and basic first aid so they could help if they would ever be needed, but their main responsibility is to provide comfort, spiritually.

“It’s easier on my crew. We fix something and transport. We’re not grief counselors. Dealing with family is not our forté. The chaplains go (to the family) and allow us to do our job with the patient,” Pine said.

Poley sometimes prays with his charges, “but I’m not pushy. I ask them, ‘Do you mind if I pray for you?’ If they don’t want me to, I back off.”

“We’re blessed to have Frank,” Pine said. “Frank is dedicated to us, and it’s worked really well for the program.”

Poley volunteers eight to 10 hours a day three days a week, plus call-outs, which are typically bad situations.

“In today’s day and age, with time demands, it’s an unusual perk to have from a volunteer,” Pine said.

The chaplains have become an integral part of EMS.

“They are always there for us and us for them,” Pine said.

EMS provides the chaplains with uniforms and helps with joint fundraising with an area church.

As an EMS chaplain, Poley is there not only for the bad news, but the good news as well. Poley has performed marriages at the station and gave another away since her father couldn’t be there.

“They are like my kids, the paramedics and EMTs. They are very special people,” Poley said. “I’m thrilled to be doing this. It has given me an extended family (in addition to his five daughters and seven grandchildren).”

Poley was born and raised an Orthodox Jew but later converted to become a Messianic Jew while living in Florida. He retired as a Messianic rabbi with ties close to the International Alliance of Messianic Congregations and Synagogues.

After he moved to Pennsylvania to be with his wife’s elderly mother, Poley worked for two years at Hersheypark driving a tram. One day one of his passengers fell off the back of the tram.

Since she was wearing a large cross, he asked if he could pray for her while they waited for an EMT. After they arrived, she told him he should become a chaplain.

Not long after that, the EMS started its chaplaincy program, and Poley knew that was where he belonged.

“I’m in my 70s. I can give a family comfort. Why can’t others? There’s no need for special training to love someone in troubled times,” Poley said.

There are so many out there who think retirement is a time to relax and do nothing, Poley said.

“Anyone can just sit around, read, or watch TV and let their life go by — why not walk up to somebody and hold onto them?”

As long as you have the strength, Poley believes you should take it and do something with it.

“You are in the fourth quarter, and the game is not over yet,” Poley said, quoting Coach Bill McCarthy, founder of Promise Keepers.