COVER STORY: When a Childhood Hobby Builds a Lifelong Pastime

At 79, Albert stays busy building model replicas of historic battleships in the basement workshop of the Manheim Township home he shares with his wife, Darlene.

A Kennett Square native, Albert moved to Lancaster in 1968 with his wife and two children to work for John Bridge Sons as a salesman specializing in mechanical power transmission equipment.

As a kid, he always spent a lot of time outside and taking things apart and putting them back together, including lawnmowers and small engines. He also enjoyed building model airplane and truck kits.

Albert remembers being 12 years old and seeing a newspaper picture of a battleship; he soon bought a plastic model kit to build his own replica.

After a mishap where he left the plastic model out in the sun — some of the model parts melted — Albert fabricated his own parts out of wood and other materials to rebuild the battleship, a practice that still continues to this day.

After receiving an associate’s degree in mechanical design from Temple University in the ’60s, Albert embarked on a career as a machinist before becoming a salesman.

“Someone I worked with convinced me I was good at talking about machines and would be good at selling them, so I decided to give that a try,” he remembers.

In 2003, he retired from Dressel Welding Supply, where he’d spent 20 years in sales.

“Well, I have a lot more time to build models now,” he laughs, when asked how he’s spending his retirement. “I don’t golf, so this keeps me pretty busy.”

He typically spends three hours a day or more working in his basement shop, equipped with a lathe and milling machine, building model recreations of World War II-era battleships.

“Sometimes I’ll wake up in the middle of the night with a new idea, and I’ll head down to the basement to see if I can bring it to life. I couldn’t do that before I was retired,” he laughs.

“I’m definitely a history buff, and World War II is what I’m most interested in. I guess I was always fascinated by the guns on those old battleships, and that’s why I’ve always focused on building those ships,” he says.

Over the years he has built about a half dozen large battleships based on historic vessels from the World War II era. Many of these models are over 6 feet in length, with hulls specially ordered from a dealer in California.

“Many of the parts that I don’t build myself have to be specially ordered from vendors around the U.S. or sometimes other countries. It’s a very niche hobby,” he says. 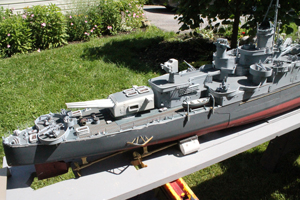 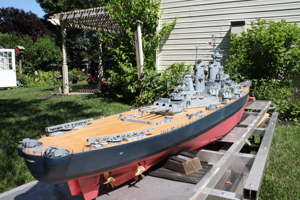 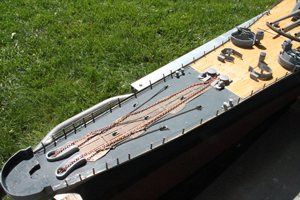 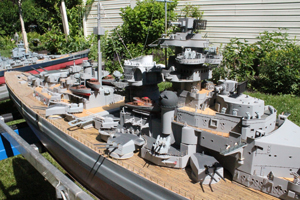 He has never sold any of his intricately designed models, preferring to build and display them for his own personal enjoyment.

“Most of what I’ve built is either on display or in storage somewhere in my house. They tend to take up quite a bit of room,” he laughs.

“It’s always just been a good way for me to ‘space out’ and get away from whatever stress might be happening in life,” he says. “Ever since I was a kid, it’s been my way to relax and be creative. It’s probably similar for people who enjoy painting or creating other kinds of art.”

Albert is a member of model clubs that host get-togethers around the country, including a meet-up in Rocky Mount, North Carolina, where a mass deployment of 1/96th-scale, radio-controlled World War II vessels takes to the water in a local lake.

“It’s a small community of enthusiasts, but we all enjoy catching up with each other, talking shop, and getting ideas for new projects,” he says.

Most recently, Albert has displayed his creations locally, including at Quarryville Presbyterian Retirement Community, where he fielded questions from residents and local media as he launched ships in a pond adjoining the property.

“A friend of mine lives there, and I asked him if anyone would mind if I brought a ship down there to put in the pond. A lot of people who live there came to see it, and the next thing I knew, the entertainment committee asked me to come back with more,” he explains.

On his return visit, his models were displayed in the home’s hallways, where residents could see his work up close.

In his 65 years of model building, Albert has seen his hobby in times of growth as well as contraction over the years.

“Models today are much larger and detailed than anything we conceived of back when I was first getting started,” he says. “But kids today might be [too] caught up with the internet and video games to get into modeling. I know that hobby shops in particular have been impacted by the internet and Amazon in particular.”

Even well into retirement, Albert has been keeping up with the technological advancements that have affected his hobby, including websites devoted to selling and discussing scale models and reaching vendors specializing in parts.

The internet has also boosted the availability of model plans and fabrication methods.

“I think 3D printing might really energize the hobby; it allows people to have more access to parts and pieces they might not otherwise be able to include in their models.”

When he’s not busy building in his basement workshop, Albert enjoys staying active during his retirement. He makes it to the YMCA a few times a week to work out, meets friends for conversations over breakfast, reads, and finds ways to stay occupied.

He is also working on another model he hopes to complete in the near future, a replica of a German battleship from the Second World War.

“The thing about these models is, they’re never really done,” he laughs. “They’re always going to keep me busy in retirement.”