Targets of all types know Bill Kohler has good aim.

After a notable career in the military — not to mention running his own personal security and private investigation firm — Kohler now directs the formidable force of his intent toward his life’s most imperative mission: advocating for increased funding for childhood cancer research after the loss of his youngest son three years ago to a rare pediatric brain cancer.

Kohler, a York native, joined the Army soon after his high school graduation in 1987, serving until 1991.

“I always say Whitney’s the one who got me back to the war,” Kohler said. “She was doing an HBO special in D.C., and she was coming down offstage and collapsed.”

After carrying Houston to her dressing room, Kohler realized the benefit of adding medical trauma training to his skill set.

He reenlisted with the Army in 2000 as part of the 1st Squadron, 167th Cavalry out of Nebraska, where he took a Special Forces course in medical training and worked as part of the security detail at Fort Myer Army Base in Arlington, Virginia, for the chiefs of staff and their families.

In 2005, Kohler was deployed to Ramadi, Iraq, as part of the Global War on Terrorism. He was part of the Quick Response Force, which required a 10-minute mission-response time that had Kohler always armed, sleeping in his boots, and near-constantly on the go and ready to head into highly dangerous circumstances.

During his tenure in the Army, Kohler was awarded the Purple Heart; Marine, Army, Navy, and Airforce Commendation medals; the Global War on Terrorism Medal; the Iraq War Campaign Medal; the Combat Medic Badge; and various others.

While serving stateside, Kohler received the Pennsylvania Meritorious Service Medal after he and a fellow soldier helped rescue a woman whose car had flipped over into a ditch during a snowstorm on the Pennsylvania Turnpike.

But after leaving the military in 2006, the cumulative toll his intense military service had taken on his body became apparent, and Kohler began physical and speech therapy.

“I had a bleed on my right frontal lobe, 10 fractured teeth, a fracture in my spine, I had taken shrapnel through my right calf — everything happened on the right side,” he said. “And I was getting frustrated because I couldn’t remember things.”

His injuries left him with a 70% disability rating, and the Veterans Administration offered to pay Kohler to continue his education. Already using his medical skills as a technician in a hospital emergency department, Kohler decided to pursue a nursing degree.

But he sidelined those studies in 2010 to run for state representative; in 2011 he transferred schools and changed his major to human development and family studies.

“I was always trying to challenge myself all my life, trying to do things,” Kohler said. “I rock climb, I mountain bike, I’m a master scuba diver, I fenced, I taught myself to play the piano.

In addition to serving with multiple local veterans organizations, Kohler also became involved with Casa Corazon, a medical mission project in Honduras where he could put his extensive medical training to use.

In 2007, his youngest son, Ayden, had been born, which had motivated Kohler to address the drinking problem he had developed while struggling to readjust to civilian life.

“One day I put the bottle down, and it was like my world changed — it was like that positive thought changed everything, and that’s what made it so hard losing him,” Kohler said.

Ayden’s mysterious symptoms first appeared at age 9 while Kohler was coaching his son and his teammates at their football practice.

“He was very competitive, so he was always running, trying to be in front of the pack,” Kohler recalled.

On the first lap of a run, Ayden started falling down.

Eventually, neurological imaging showed a tumor in an area of the brainstem called the pons, which regulates many of the body’s vital functions. The diagnosis was diffuse intrinsic pontine glioma, or DIPG, an aggressive pediatric cancer with a 0% survival rate.

Kohler’s college studies — and his entire world — stopped to care for Ayden.

Symptoms of DIPG include trouble with balance, walking, vision, chewing, swallowing, and drooling, as well as headache, nausea, vomiting, and facial drooping.

The median age of patients with DIPG is 6-7 years old, according to DIPG.org, with most kids diagnosed between ages 5 and 9. The median survival range is eight to 11 months from diagnosis.

“For me, being through some of the things I’ve been through, I’ve never had the luxury to make my decisions based on emotions, so [after the diagnosis] I was reading, researching, talking to people, and I realized nothing could be done.

“Doctors tell you spend your time wisely and live, to make memories,” Kohler continued. “A lot of people get angry when doctors tell you that, but I realized, ‘Wow, they’re right’ — and then I just took off.”

That meant jam-packing as many experiences into Ayden’s remaining months as possible: FaceTime calls with WWE pro wrestlers and WWE CEO Vince McMahon; a backstage meet-and-greet at a WWE show; phone calls from foodie-TV personalities Guy Fieri and Duff Goldman; two meetings in Pittsburgh with the Steelers; and fishing and hunting trips.

Ayden passed in March 2017 at age 10, just seven months after his diagnosis.

According to the CDC, more than 15,000 cases of pediatric cancer are diagnosed in the United States each year, the most common types being leukemia, lymphoma, and brain cancer. After accidents, cancer is the second leading cause of death in children ages 1–14.

And yet, according to the National Pediatric Cancer Foundation, only 4% of government research funding goes toward pediatric cancer.

It’s not enough, say Kohler and the families of the nearly 1,200 children expected to die from cancer this year, according to the American Cancer Society. “More than 4” has become the rallying cry of 4AydenStrong, the foundation Kohler founded in his son’s memory (www.4aydenstrong.com).

With a dual mission, the foundation spreads awareness of DIPG and all pediatric cancers and serves as a financial resource for Pennsylvania families struggling to pay bills in the wake of a pediatric cancer diagnosis.

Along with personal donations, 4AydenStrong’s funding is generated by two annual fundraising events, a dance and a sporting clay shoot, both of which were canceled this year due to the COVID-19 pandemic.

After Ayden passed, Kohler began traveling the country to speak at hospitals and other forums to advocate for pediatric cancer research funding. Kohler also began collecting a jarful of soil from the home of each child with DIPG that he visited.

He initially thought he would place the piles of dirt on Ayden’s grave, but instead he decorated the jars with stickers representing the interests of each afflicted child — butterflies, baseballs, etc. — as well as their names and locations.

The jars, which now fill a backpack, travel with Kohler to medical centers, board meetings, and congressional hearings. He has been an active presence in all levels of government over the last few years, speaking directly with lawmakers and health officials to push for increased funding for pediatric cancer research.

“I’d take all these jars out and set them on the table, and on the tops of them I have Dani from Connecticut, Maddie from New York … wherever they were from,” he said. “It was a pretty deep visual.”

Kohler served as a board member of the National Children’s Cancer Consortium and as its vice president of legislative advocacy. Together, Kohler and his fellow advocates have pushed lawmakers to pass legislation supporting childhood cancer research funding in Pennsylvania.

Through their persistence, there is now a checkbox at the bottom of online state income tax return forms that gives filers the option of donating $5 toward pediatric cancer research. That money goes into a pool from which any of the state’s four research hospitals can request funding for childhood cancer research.

Kohler hopes to have similar legislation passed in other states, as well as state and national recognition days for DIPG.

“You can sit here and you can complain that there’s not enough funding for childhood cancer research or you can do something about it, and that’s kind of what our mentality was,” Kohler said.

And while the focus of the 4AydenStrong foundation is pediatric cancer, Kohler admits he has trouble turning away requests for help from any child in medical need. A mother once asked for help covering the cost of a new prosthetic for her growing 4-year-old daughter.

Research suggests that, rather than any environmental factors, a genetic mutation may be at the root of DIPG. Together with a South Carolina-based nurse practitioner, Kohler is working toward that end as well, compiling data on four DIPG families who have submitted hair, urine, and blood samples to be analyzed for any observable correlation.

Kohler is also in touch with a physician in Mexico who is working on an intra-arterial delivery system that carries a cocktail of medication directly to the brain tumor; so far, it has shown some success in prolonging the children’s lifespans, but the $300,000 cost is not covered by insurance.

“The kids still pass, but some are living 12 months or longer. One little girl from Maryland we were helping, she made it 21 months,” Kohler said.

Nationwide, the DIPG community is relatively small; only 300–400 kids are diagnosed per year, Kohler said, and those he’s come in contact with know they can reach out to Kohler at any time for support or counsel.

And though his advocacy mission has given this phase of his life meaning, he admits it takes a toll. Desperate parents sometimes call him at all hours of the night.

“The emotions that they give to me, it’s like going through them every day over and over, never having any resolution of my own,” he said.

Last fall Kohler decided to step back from the foundation for a while in the name of self-care. His sister agreed to take over its operation for a year, but Kohler hasn’t lost his drive.

“I’m the kind of person that’s trying to save the world, but you realize you can’t save the world [alone] ... it takes a team effort.” 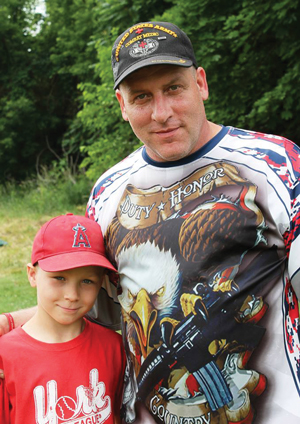 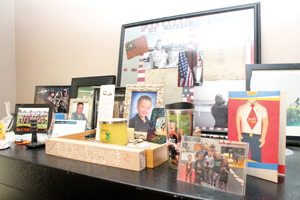 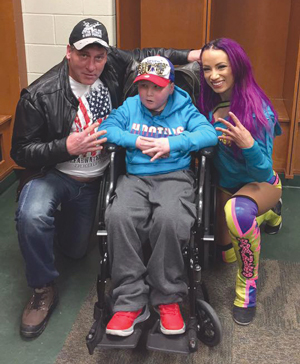