How do you explain why 51,000 men were killed, wounded, captured, or missing in just three days of fighting in America’s bloodiest battle?

The tour guides at the Gettysburg battlefield provide answers that dive deeply into the history of the time, battlefield tactics and strategies, the personality of the leaders, and the impact on the individual soldiers and civilians.

He explains that it was the first time the Southern army — the Army of North Virginia — was decisively beaten and driven from the field of battle.

The Union’s Army of the Potomac, led by Gen. George G. Meade, clashed with the advancing Confederates from July 1, 1863, until July 4, when Gen. Robert E. Lee was forced to withdraw his battered army.

“The South had fewer soldiers and Robert E. Lee lost many of his elite officers, the flower of the Confederate Army, during the battle. Twenty-one months later, the South surrendered,” Fowler explains.


A Passion for History

Fowler is articulate, insightful, and knowledgeable about all aspects of the battle, and his passion for his subject matter comes through with every word. He even lives on the battlefield, five minutes from the park’s visitor’s center.

“I was a history major in college and was always interested in the Battle of Gettysburg,” says Fowler. “America was the first successful democracy. The Civil War was a test whether or not we would tear ourselves apart. It questioned if a democracy can endure. Can this really work?

“The outcome affected the whole world. If the United States couldn’t survive the Civil War, other countries would be less willing to try our form of government.”

His interest led to a lot of reading on his subject — more than 3,500 books have been written about this battle.

Each guide goes through a rigorous process of self-study and federal testing that demands in-depth knowledge on every historical aspect of the battle.

When Fowler began the process, he was living in his native Texas and was ready for a new stage of life. He had worked in retail management and the computer industry. At the time he started studying to be a guide, he had his own mountain- and rock-climbing business. 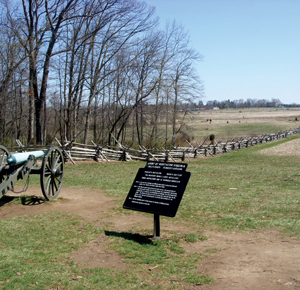 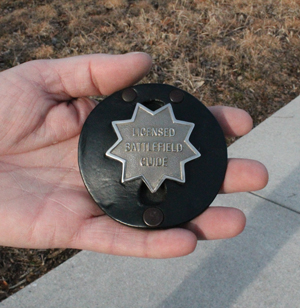 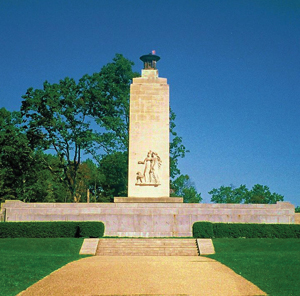 Fowler took the exam three times until he passed it, over a period of six years. He eventually followed his passion across the country and settled on becoming a guide at Gettysburg, which had absorbed his interest for much of his adult life.

“It’s by far the most enjoyable job I’ve ever had,” Fowler explains, after eight years on the job. “I can’t think of anything else I’d rather be doing.”

Although the pay is modest, and guides do not get vacation or paid days off — battlefield guides are paid through the tours they lead, not through tax dollars — they relish the opportunity to educate their audiences about the significance of the battle at Gettysburg.

“Guides can answer any questions that come our way, from war strategies, to the impact of the geology of the landscape, and the political issues of the time,” Fowler says. They judiciously avoid modern political controversies.

With his deep font of knowledge, Fowler is able to tailor each tour to meet the specific interests of the audience.

For example, when I mention my German heritage, Fowler quickly notes that thousands of Germans were fighting in the battle, as were units of Irish, English, and other immigrant groups.

“Sometimes you got off the boat, and then it was, ‘Welcome to your new country — here’s your gun to defend it,’” says Fowler.

What we may have forgotten with the passing of time is that everyone was affected by the Civil War. The Battle of Gettysburg alone engaged 93,000 Union and 71,000 Confederate soldiers. While battlefield casualties were brutal, thousands more left the battlefield maimed and traumatized.

In the four years of the Civil War, 750,000 people died out of the 31 million people living in the U.S. at the time. With today’s population, that would be a death toll of almost 8 million people.

“It was a national tragedy,” says Fowler. “One of the reasons we want to keep history alive is so that it never happens again.”

He quotes George Santayana, the Spanish philosopher and poet: “Those who cannot remember the past are condemned to repeat it.”


More than a Million Visitors Each Year

More than a million visitors visit the Gettysburg National Military Park each year from all over the world.

This includes busloads of school children; visitors from Pennsylvania, Ohio, and New York (about 60%, according to Fowler); a “fair share” of Southerners; and soldiers who study tactics (including units from other countries). About 10% of visitors are international.

“It is always a surprise how knowledgeable people from other countries are about our history and even this battle,” Fowler says.

The battle had such an impact on America’s history that most presidents visit the park. Fowler has a few presidential anecdotes ready.

Eisenhower retired in Gettysburg and gave tours of the park to world leaders. Kennedy was scheduled to come to the park for a major event in November 1963 but canceled to go to Texas for his ill-fated final visit. Fowler was there when then Republican presidential candidate Donald Trump visited the park on Oct. 22, 2016.

Fowler belongs to the Association of Licensed Battlefield Guides, an organization that keeps in contact with legislators and gives them free tours, as well as promoting guiding in general.

“We want to encourage leaders to learn about the battle,” says Fowler. The message? “People put everything on the line for their beliefs, but were ultimately able to reconcile.”

He points out that the Eternal Light Peace Memorial was built with donations from both Northern and Southern states to honor Union and Confederate soldiers. The monument was dedicated by Franklin D.

Roosevelt on July 3, 1938, as a part of the ceremonies for the 75th anniversary of the Battle of Gettysburg.

Fowler concludes that while he loves educating his tour groups on all aspects of the battle, he wants one takeaway message to stand out.

“We as Americans are all one country. The people who fought this terrible battle were able to get over their differences. The Union was restored, and our form of government survived,” says Fowler.

“The idea of the United States is much more important than our differences, then and now.”