Don Shuler knows how to put a smile on people’s faces.

For the past 17 years he has been entertaining crowds as Buzz-Zee, a Zembo Shrine clown.

Shuler first became interested in being a clown while serving as the master of his Masonic Lodge. He invited a Shriner clown unit to give a presentation about their history and what they do.

The highlight of the meeting occurred when the clowns made up one of the Masons in full clown makeup. That person was Shuler’s father.

With his interest now piqued, Shuler took the plunge.

“Talking with them and hearing what they do, it sounded like a lot of fun,” he said. “Of course, you’re helping the Shriners, which is the organization for the Shriners Hospitals for Children and the burn centers for burn victims.”

Shuler has gone full circle, having always enjoyed working with kids. He originally earned a degree in elementary education but, due to economic reasons, he ended up working in the trucking industry.

Now retired, he finds himself spending a lot of time with kids while serving a fraternal organization dedicated to helping children.

“I was very apprehensive about [clowning] at first because I’m not that big of a showoff-type person,” Shuler said. “I thought, ‘I’ve got to put this stuff on and go out there and be in front of people.’ It was a little intimidating at first.”

Realizing that putting on makeup allowed him to create a completely different persona, provided a sense of anonymity, and permitted him to just focus on the fun, Shuler soon got over his initial reluctance.

Buzz-Zee is an auguste clown, with white makeup applied around the eyes and mouth. Other types of clowns include whiteface, in which the entire face is covered in white, and tramp, in which the person appears as a hobo with a beard of stubble and tattered clothing.

Shuler said it takes him an hour and a half to complete his makeup and that Buzz-Zee’s character has evolved over time.

“If you look at the way I was dressed when I first started and the way I dress now, it’s changed, and the makeup has changed. Over the years I toned some things down and accented other things,” Shuler said.

Shuler shared a humorous story from when he first became Buzz-Zee. Heading to a park for an outing with a group of special-needs children, he realized he had forgotten the directions.

Spotting a farmer bailing hay, Shuler drove his 4x4 truck out into the middle of the field to ask for help. Shuler recalled the look of surprise on the farmer’s face when a clown in full makeup and costume hopped out of the truck.

The situation grew even more comedic when the farmer, not being sure of the directions, sent Shuler to the local police station. The officer who responded to Shuler’s knock appeared extremely uneasy and would only open the door about 6 inches. 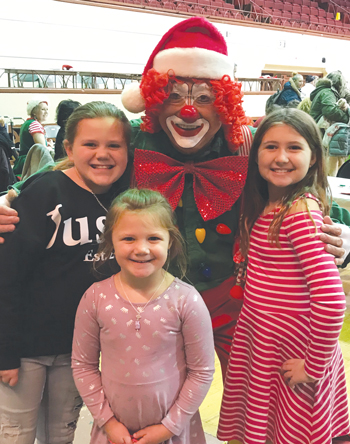 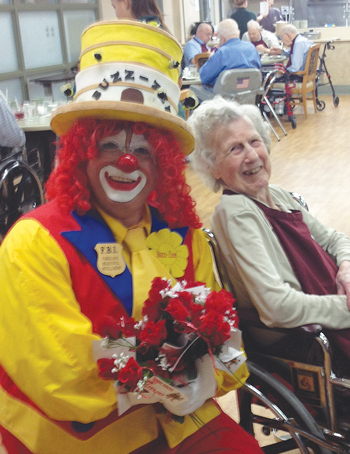 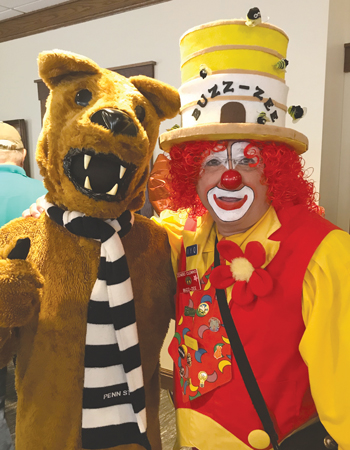 Arriving at the park, Shuler, not realizing there were two parties, ended up joining a large family reunion by mistake. Eventually he was directed to the proper group.

Shuler is now a life clown, having served 15 years on active status, which requires 18 makeups per year and attending at least six monthly meetings.

According to Shuler, the circus runs Wednesday–Sunday for a total of 10 performances.

“The clowns usually do two skits during each circus performance, and we normally get quite a few clowns that show up for that,” he said.

The clowns also visit the children at the Shriners Hospital in Philadelphia. Another of their traditions is Rose Day, held the Sunday before Valentine’s Day, when they visit local nursing homes and provide all the ladies with a silk rose.

Shuler is quick to point out that Shriner clowns do not get paid; it is a strictly volunteer gig. Being a clown is an expensive undertaking, however — Shuler’s first pair of clown shoes cost $395.

Nevertheless, it is a labor of love with the rewards being the smiles on kids’ faces and the opportunity to brighten the days of older people. Shuler also enjoys the comradery shared among the clown unit, a tight-knit group that does a lot together besides clowning.

Shuler said someone thinking about becoming a Shriner clown “will find it very rewarding, giving your time towards something good.

“It gives you a real good feeling inside.”

Shriners are a subgroup within the Freemasons that focuses on fun, fellowship, and the Masonic principles of brotherly love, truth, and relief.

They are easily recognized by the distinctive red fezzes they wear.

The Shriners are best known for their philanthropic support of the Shriners Hospitals, where care is provided free of charge for children in need.