COVER STORY: Read It, Love It, Pass It On

Read it. Love it. Pass it on. A premise that can change a child’s world.

These simple words are found on a sticker attached to each book stored in a brightly decorated cardboard box located in a neighborhood laundromat. This inspiring message is the guiding principle of the Laundromat Library League.

Established in 2014, the LLL is the brainchild of co-founders Arlene Rengert and Karen Iacobucci, both of southeastern Pennsylvania. It has one primary mission: making children’s books available to children in homes that have few or none.

A decorated “library box” containing 60 books — ranging from board books for toddlers, picture books for beginning readers, chapter books for independent readers, and full-length books for teens in both fiction and nonfiction topics — is placed in a laundromat once the owner has given permission.

Signs on the box encourage children and caregivers to read a book there, take it home, and pass it on to someone else. Books don’t need to be returned, just utilized. Once or twice a month, a volunteer steward refreshes the contents of the box, straightens the area, and removes anything that doesn’t belong.

While volunteers are the backbone of the LLL, Rengert is its heart and soul. Raised in suburban Illinois, she grew up in a town with a welcoming library and parents that read to her every evening.

Earning higher-education degrees in geography and demography, she would go on to chair the Department of Geography and Planning at West Chester University. While raising five children with her spouse, George, their home was full of books.

“Reading to children was probably my favorite thing to do,” Rengert says.

“The Little Engine that Could. The ‘I think I can, I think I can’ is still something I quietly say to myself when confronted with a problem.”

The problem became apparent early on.

“My years in West Philadelphia as a young mother probably were when I became personally exposed to the greater advantages in reading and education that some children have. We had friends of all income levels and races, and yet our house had many, many books and our neighbors down the street did not,” Rengert says.

Rengert had heard of a group in the Midwest that was providing free children’s books to impoverished caregivers, and an idea was spawned. With the luxury of time that retirement brings, Rengert teamed up with longtime friend Iacobucci to create a plan.

“In the early summer of 2014, Karen and I were chatting and reinforced the idea … We settled on laundromats as logical distribution sites because caregivers who have no laundry appliances at home probably also lack children’s books and/or the time and budget to take children to libraries.” 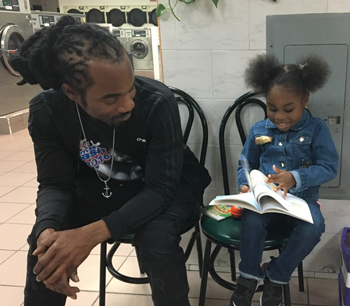 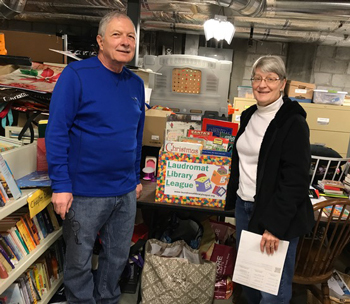 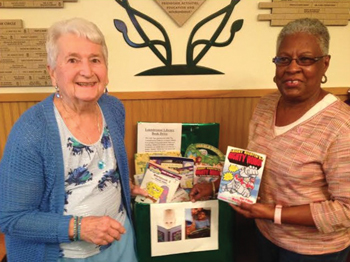 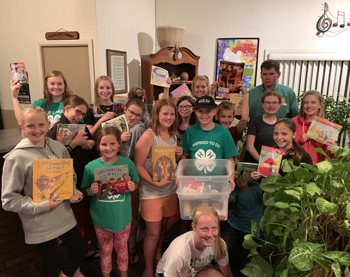 They shared the idea with friends, neighbors, and anyone else who would listen — and the LLL came to fruition.

There are currently more than 200 LLL sites scattered across 26 states, most of which are in southeast Pennsylvania. The books come from a variety of sources, including libraries, schools, book sale leftovers, youth groups, and private donations. Over 100,000 books have been donated so far.

Hundreds of additional books in Spanish or with multicultural themes or images have been purchased to enrich the libraries. Financial support comes from donors, businesses, restaurant fundraisers, youth organizations, and grants.

In 2016 the LLL incorporated as a 501(c)3 nonprofit so that monetary donations are tax deductible. The basic operating budget covers storage rental, insurance, materials needs, and website maintenance but does not include purchase of books or postage to mail them to distant sites.

There is no paid staff, and a local school provides no-cost space for sorting and assembly of books and for dropping off book donations. The school is also where the decorated, filled boxes and replacement sets of books await pickup by volunteers who deliver to local sites.

Over 500 volunteers ranging in age from 8-80 collect and organize the books, recruit and steward laundromats, or donate funds or their professional skills, such as graphic arts, accounting, translation, and the like.

In September of each year there is a potluck social held to celebrate the LLL’s anniversary, where all participants within driving distance are invited. Twice-monthly updates are sent out with news and needs.

When asked what she considers the LLL’s greatest success to be, Rengert answers, “Growing itself.”

Rengert shares the story of a third-grade teacher at a backyard barbecue who related a story to gathered friends. The teacher had assigned students to bring to class something from home that they really loved and to explain why they loved it. One child brought in a book with the LLL book sticker on the front.

As a result of hearing this story, a gentleman who had not previously heard of the LLL acquired a $500 grant for the organization. Rengert listed multiple examples of individuals and groups that have helped grow the LLL.

This continuing growth is what keeps Rengert motivated.

“Before I die, I want to have children’s books in at least one laundromat in all 50 states,” she says.

The growth and success of the program is getting noticed. In 2015 the LLL received a literacy award from the Keystone State Literacy Association.

Additionally, last March, the LLL was invited to send representation to the LaundryCares Foundation’s Literacy Summit. Here, laundromat owners partnered with the Clinton Foundation’s Too Small to Fail initiative and Libraries Without Borders to enhance early literacy efforts in local communities across the country.

The LLL (www.laundromatlibraryleague.org) is always looking for volunteers and donations. They can be reached at laundromatlibrary@gmail.com or by calling (610) 696-2282.