After serving eight months in Vietnam as an artilleryman, Jon Hosfeld was no stranger to danger.

Decades later, in a moment of crisis, Hosfeld summoned the physical, mental, and spiritual strength to hop aboard a runaway train carrying hazardous materials — an example of courage that inspired the critically acclaimed movie Unstoppable.

Born in 1948, Hosfeld grew up in Central Pennsylvania to religious parents who taught him patriotism and how to tell right from wrong. His father served in the Army Air Corps in World War II but never talked about his tour of duty.

Hosfeld was small growing up and was frequently bullied. His parents told him to stand his ground.

“I did not have any trouble I could not handle,” he recalls.

After high school, Hosfeld applied to be a brakeman with the Pennsylvania Railroad. He passed the test, but the company told him it would not waste its money hiring and training him and then watch him get killed in Vietnam.

He turned 18 the very next day and registered for the draft. But just two months later he volunteered for the U.S. Army’s deferred program in communications.

“That will keep you out of ’Nam,” said his recruiter.

After training at Fort Bragg and Fort Dix, the Army sent Hosfeld to South Korea, where he received rapid promotions to E5 sergeant. He describes his Korean service as “very intense and demanding.”

But because of a bizarre bureaucratic maneuver, Hosfeld was transferred to West Germany in August 1968 to serve with an artillery unit. This was despite the fact that he had no training in this field.

In March 1969, Hosfeld received his orders for Vietnam. Surprisingly, he was “elated” to leave Germany because of the poor NCOs and officers. He describes his garrison duty as “a nightmare” due to racial tensions and drug problems.

“I wanted to get away from it,” he says.

Before heading to ’Nam, he traveled home to visit his parents. He promised them he would do his job and come home.

“My father never showed emotion, but when we went to the Harrisburg train station for him to leave, tears were running down. He said, ‘Jonnie, I thought I fought in a war to end all wars.’”

As Hosfeld’s flight from Japan was coming in for a landing at Cam Ranh Bay, he looked out the window and saw tracers and explosions. His plane circled the airfield five times before landing.

On his third day in Vietnam, he flew on a transport airplane to Pleiku and then by chopper to his unit. He explained to the commanding officer that he was not trained in artillery.

“What the hell are you doing here?” the officer asked.

“You tell me and we’ll both know,” replied Hosfeld.

Hosfeld was given a two-week crash course in artillery operations. His battery consisted of about 100 men. Six 105-millimeter artillery pieces were arranged in a star pattern, with five guns at the points and one in the center. An infantry company of similar size guarded the outer perimeter.

The temperature often exceeded 100 degrees, and at times they suffered through torrential monsoon rain so thick they couldn’t see their hands in front of their faces. By the end of his deployment, Hosfeld and his men were eating C rations left over from World War II.

Several times the men had to pack up all their weapons and gear and fly in helicopters to a new landing zone, where they had to set everything up yet again.

They were often attacked during this period, when they were most vulnerable. It would take 24-36 hours just to dig their personnel bunkers, which Hosfeld says made the men “as strong as oxen.”

Hosfeld viewed everyone in his unit as an asset, so his job was to find that asset in each man and use it to its maximum potential.

But not every soldier fit in. Hosfeld sent three men back to base camp. One of them became depressed when he learned his wife was being unfaithful. Another accidentally shot off a round inside a bunker, nearly killing a fellow soldier.

Hosfeld describes a battle where an infantry platoon was pinned down by North Vietnamese infantry. His artillery unit fired nine rounds every 10 minutes for 36 hours. The platoon called in the rounds practically upon themselves, eventually forcing the NVA to pull back.

“I saw bandaged, injured, crippled soldiers, and thought, ‘They’re mad as hell; they’re gonna kick our asses.’ Instead, it was just the opposite. They hugged us and said, ‘Thank you, brothers.’ That was one of my proudest moments, protecting my fellow soldiers.”

One night, Hosfeld was holed up in a bunker, packed in ice with a 105-degree fever. But his landing zone was overrun by NVA. During the firefight he ran out to his gun section.

His CO yelled, “You’re sick — what are you doing?”

Hosfeld replied, “I don’t have time to get sick; I have to get back to my men. I have a couple hurt.”

He took charge and directed small arms fire on the perimeter. Hosfeld was awarded an Army Commendation Medal for valor.

Like many Vietnam veterans, Hosfeld had difficulties readjusting to civilian life, but he eventually got back on his feet. He landed his dream job with the Penn Central Railroad and then married Judy Snyder, whom he describes as his “rock.”

His post-Vietnam moment of truth came on May 15, 2001. Due to a series of errors, a locomotive pulling a train of 47 cars was running uncontrolled for two hours in northwestern Ohio. Two of the cars contained liquid phenol, a toxic chemical used in paints, dyes, and glues.

A locomotive with a two-man crew, Jess Knowlton and Terry Forson, chased down the runaway train, hooked to the rear car, and slowed it down. When the train was traveling at 11 miles per hour, Hosfeld ran alongside it, jumped on board, and shut down the engine just south of the town of Kenton.

“I saw my men ahead of the runaway train in jeopardy, and I knew I had to make it,” recalls Hosfeld.

Hosfeld has since retired. He works with homeless veterans and is active in the VFW and American Legion. He and Judy have a daughter and two grandchildren.

In his darkest times in Vietnam, Hosfeld wondered if he’d make it home to get married, have children, and maybe even have grandchildren.

“That has all happened. We are so blessed,” says Hosfeld. But, he adds, “Vietnam was a long time ago. Hopefully I have adjusted. However, at the blink of an eye, it’s all back.”

To read an interview with Jon Hosfeld about the runaway train, visit www.cnn.com/chat/transcripts/2001/05/16/hosfeld.cnna/. 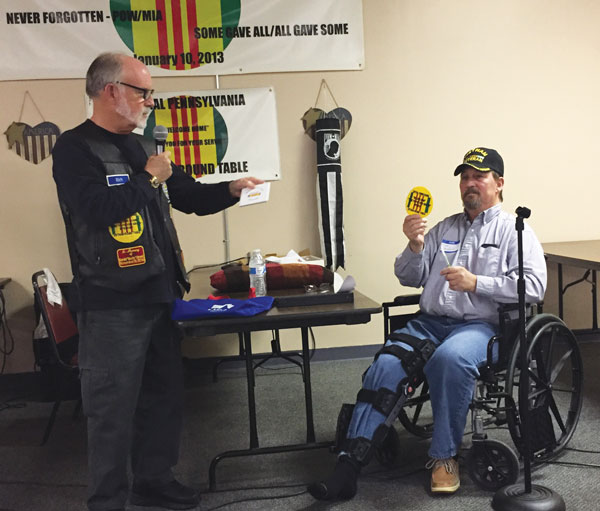