Books about war are generally filled with tales of sacrifice and courage in mortal combat. But sometimes they neglect the heroism of those who served in support roles. And that is particularly true of nurses.

I recently had the great honor to meet two nurses who served in evacuation hospitals during the Vietnam War: Ann Thompson, of Lebanon, and Linda Goodhart, of Palmyra.

Although neither one fired a shot in anger, they experienced firsthand the horrors of war, while healing and comforting wounded and sick civilians and combatants.

I will tell Thompson’s story this month and Goodhart’s story in 50plus LIFE’s February issue.

Thompson grew up in Madison, South Dakota, a town of about 5,000 near the Minnesota border. She signed up for the Army Nursing Corps in 1962, before she had even heard of Vietnam. She committed to three years of military service in return for college tuition support.

After graduating from St. Olaf College in Northfield, Minnesota, in 1964, Thompson was sent to Fort Sam Houston in Texas to learn how to become an Army nurse.

As she recalls, “Texas in summer is unlivable.”

She specialized in neurology and psychiatry but also learned to march, salute, “and be afraid of other officers.”

She performed tracheotomies on goats to learn the lethal effects of different ammunition. She also had to go through a gas chamber with a mask, and came out with a severe cough and burning eyes.

She entered the Army as a second lieutenant. Two days before her wedding, she received orders to go to Vietnam.

After sailing across the Pacific on a troop transport ship, she arrived in Saigon in October 1965. When she reached her field hospital in a defoliated area, there was just one general-purpose tent and no bathrooms, food, or running water. The only thing in abundance was dust.

Thompson later helped set up a tent for 500 people. It was time to go to bed at 10:30 p.m. when a sergeant asked her and several other nurses to dig a trench around the tent. The nurses were utterly exhausted, so they refused.

But two hours later it rained heavily and water flowed into the tent. Welcome to Vietnam.

After helping to build the 93rd Evacuation Hospital at Long Bien, she was driven about 10 miles to another hospital in an unescorted vehicle, while being shot at. The Army even stationed ammo dumps right next to her hospital, making it a legitimate target for enemy fire.

Thompson quickly realized that her training in Texas was woefully inadequate for the rigors of wartime medicine. There were no rules on how to run an Army hospital, and the most competent people weren’t necessarily the ones making decisions.

With no well-established frontlines in Vietnam, Thompson often treated severely wounded soldiers right off the battlefield. Making matters worse, enemy Viet Cong guerillas were all around.

“You didn’t know if the little old lady over there will kill you in the morning or at night,” says Thompson.

Thompson vividly recalls one tragic story involving a soldier named George Rodriguez. He came to the hospital with a large, ugly wound running down his back. He didn’t want to return to combat, but Thompson and her colleagues patched him up, and he was sent back to the meat grinder.

Rodriguez returned to the hospital three weeks later. But this time he was missing both arms, and his eyes were like those of a dead man. He asked if his wounds would keep him from fighting again.

“I had to go outside and throw up in the mud because I was emotionally exhausted,” says Thompson.

Besides tending to the wounded for 12-hour shifts, six days a week, the nurses had to treat patients suffering from fungal infections, snakebites, and malaria. To prevent this dreaded disease, they gave soldiers orange pills to take once a week. But the pills sometimes made the soldiers sick, so they’d stop taking the medicine and come down with various forms of malaria.

And like all those who served in Vietnam, Thompson had to endure extreme heat and humidity. When she returned to Washington, D.C., on leave during a hot September, she had to wear wool sweaters and socks to stay warm.

“The mission was to always smile and say to our patients, ‘You’ll feel better tomorrow, and here, have some morphine.’ We never ever said, ‘I’m too tired or too hungry or I’m too angry’ to a wounded soldier because they were the most important part of our mission.”

Thompson takes pride in the medical advances that resulted from the war. These include the development of a triage system that is currently used in hospitals all over the country. And Penn State Hershey’s Life Lion is a direct descendant of medevac helicopters in Vietnam.

And, as she says, “We did malaria studies out the yazoo.”

Despite all the tragedy she saw firsthand during her year in Vietnam, Thompson says this experience made her stronger.

And it prepared her for a 30-year postwar career in psychiatric nursing at the Veterans Administration hospital in Lebanon. Although she has officially retired, she still does volunteer work there.

“I was a shy little girl from South Dakota, and I didn’t say bad words. But I found my voice in Vietnam,” she says. “When I came home, nobody was interested in my voice, but years later people are finally interested in what I have to say. People are listening to nurses, corpsmen, and soldiers.”

Thompson shares many of her Vietnam experiences in a 1993 book she co-authored with Goodhart and three other nurses. This book, Another Kind of War Story, is available through Amazon. 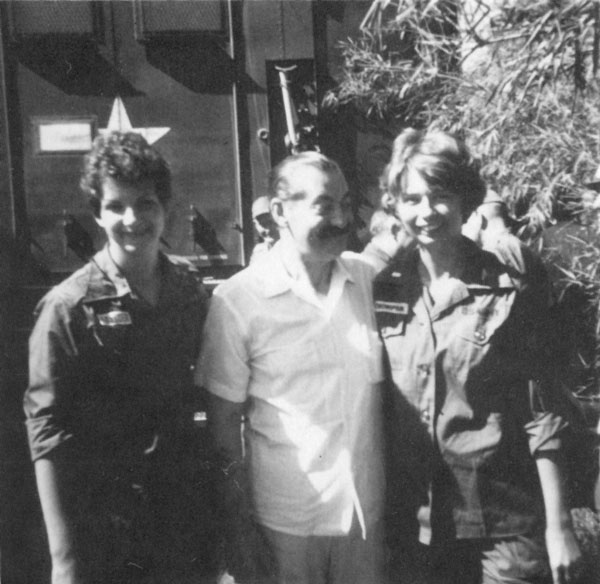