Richard (Dick) Martin turns 100 on the 29th of this month. He has lived a full life as a World War II veteran, architect, worldwide traveler, amateur painter, and sculptor.

He proudly enlisted in the Navy in September 1942, several months shy of his 20th birthday. Always interested in ships and planes, he signed up for the duration of the war, plus six months.

With a lot to learn, he traveled to the University of Missouri, Detroit, Norfolk, and New York City for education and training. He became a motor machinist’s mate, 1st class, and was assigned to the USS LST-325.

“The USS LST-325 was a tank landing ship,” he said. “It was a horrible-looking ship, but it played a critical role in D-Day and World War II.”

The 328-foot-long ship operated with 13 officers and 104 enlisted men. Its massive cargo bay could handle up to 1,900 tons of gear or 20 Sherman tanks.

Before D-Day on June 6, 1944, Martin said crew members never knew where they would go. The USS LST-325 spent one year training in North Africa. Then it carried troops and supplies to Italy, landing on the shores of Sicily and Salerno during the invasion.

Afterward, the ship traveled to England, where it began pre-invasion drills.

“I was very excited to be part of the invasion,” said Martin.

In fact, he refused to go to the hospital after suffering shrapnel wounds in a training exercise for fear of missing the invasion.

D-Day was the largest amphibious invasion in military history. Some 156,000 American, British, and Canadian forces landed on five beaches along a 50-mile stretch of France’s Normandy region.

“There were ships and planes everywhere,” recalled Martin. “It was an unbelievable sight.”

The ship and crew approached Omaha Beach with the mission of unloading 24 tanks. Enemy gunfire was heavy.

“I don’t know why, but I wasn’t scared,” offered Martin. “I think it’s because I was so young. I was proud to be part of the invasion, part of history.”

Martin confessed, however, he was afraid during an incident after D-Day. He manned a 20mm anti-aircraft gun when the ship next to the USS LST-325 was blown up.

“My knees were knocking,” he said.

During the war, Martin’s ship delivered troops, equipment, and tanks onshore. Then it filled its empty cargo with wounded American and Allied Forces soldiers and took them to hospitals.

The ship made more than 40 trips across the English Channel, carrying thousands of men and pieces of equipment needed by troops. It continued to run supply trips between England and France before returning to the United States in May 1945.

He had used his time at sea wisely. Interested in architecture when he enlisted, he took several architecture books with him. He studied them and produced hundreds of architectural drawings while on the ship.

Upon discharge, he showed them to a friend, who was an architect. The friend set up an appointment for him with another architect, who encouraged Martin to take a four-day test to become a registered architect.

He took the test and passed.

“My time in the Navy was equivalent to four years in college. My studying and drawing paid off,” said Martin, who was an architect for more than 70 years.

Martin attended ship reunions over the years to keep in touch with many of his crewmates. Today, the USS LST-325 is permanently docked in Evanston, Illinois, and open to the public.

“I was glad to serve my country,” said Martin. “Even though it was a dangerous time, and one of uncertainty, it was a great experience. I made a lot of lifelong friends. I often think about my time in the Navy.” 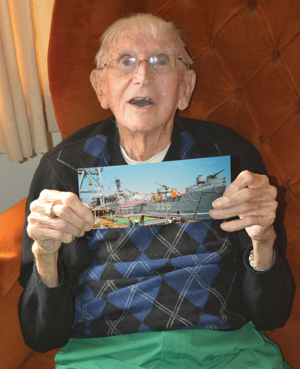